This film is the third instalment of the Alien film series; 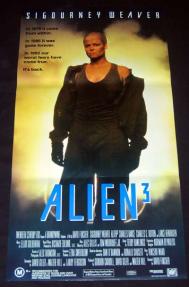 set directly after the events of the previous film Aliens         (1986 – which was written and directed by James Cameron and is personally my favourite instalment of the franchise).

The plot of the film went through a variety of script, visual and editorial changes before it hit screens in the summer of 1992.

During the opening scene an escape pod from the Colonial Marine spaceship Sulaco crash-lands on a prison-run refinery planet. This crash landing brought on by ‘supposedly stowaway’ alien ‘face-huggers’ kills everyone aboard except Lieutenant Ellen Ripley (Sigourney Weaver).

The execution of fan favourites Cpl. Dwayne Hicks (Michael Biehn), the andriod Bishop (Lance Henriksen) & Newt (Carrie Henn) within the first 6 minutes of film caused major controversy among fans of the franchise a

s they saw this as a total disregard to the characters, the previous instalment and James Cameron was quoted at the time to say ‘[that it was] a slap in the face’.

These aliens that randomly appear are a blatant way of making another sequel (which is substandard compared to its predecessors); and begin a killing spree in the prison.

As the film progresses we see the alien find a host (a dog) and bursts out very gruesomely. This ‘non-human host’ changes the alien from what we have seen in previous instalments making it more animalistic in its movements and killing style. This is brought to the screen using very poorly designed CGI which is very noticeable on screen for example; The colour of the alien does not blend with the other footage and at times looks like a sticker stuck on the screen.

The creature begins to kill off inmates and guards one-by-one, however once encountering Ripley it strangely refuses to kill her. As the dwindling number of inmates prepare their defences against the creature, Ripley (who we see becomes weaker and weaker throughout the film) discovers that she is impregnated with an embryo of the Alien Queen (from the final scene of Aliens).

This is why she had not been attacked as she is a vessel of the ‘new’ Alien Queen – and once born will have the ability to created ‘thousands’ of alien eggs. Ripley also finds out that the         Weyland-Yutani Corporation wants the Queen embryo and the adult Alien, with the hope of turning them into biological weapons (this has been their aim all along).

While Ripley battles the Alien for the final time,the Weyland-Yutani Corporation team arrives being led by a man who looks identical to the Bishop android claiming to be its creator.

Ripley knowing that the company only has one aim for the embryo refuses and steps back onto a mobile platform, which is positioned over a furnace. Sensing danger the alien Queen bursts from Ripley’s chest.

Ripley holds on to the alien so it cannot escape the inferno, and they both fall into the fire to their death.

As the end of the film draws near a sound recording of Ripley (her final lines from the original Alien) is heard from the Sulaco escape pod, “This is Ripley, last survivor of the Nostromo…signing off.”

This film had a lot of potential and could of been a great addition to the franchise.

Some elements of the plot are unique such as Ripley sacrificing herself to stop the company from acquiring the embryo and the new look of the alien. However the poor CGI, the lack of story, the killing off of popular well developed characters and replacing them with boring undeveloped ‘criminals’ was an extremely bad move that derailed the franchise and pissed off a lot of fans (myself included). 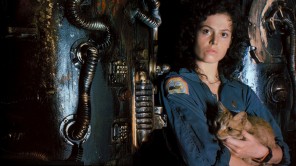 hell over the past three movies and has finally reached the end of her journey.

#MichaelKeaton Confirmed to return as #Batman  in #TheFlash movie - link in bio  #DCEU #Batman89 #BatmanReturns
Trailer released for horror/comedy #thursdaythe12th released starring @bsuth20 @marilynghigliotti @bradleolyon check it out at IndieMacUser.com LINK IN BIO #Horror @promotehorror
This is a cool milestone!