Coffee Town is the original comedy from writer/director Brad Copeland and marks the first feature film produced by website CollegeHumor; better known for their on-line comedy videos. This continues a new trend of features created by on-line content sites; the

feature iSteve (a comic look at the life of Steve Jobs) was released by site FunnyorDie earlier the same year. The film was released simultaneously in cinemas and on-demand.

The film stars Glen Howerton (star and co-creator of TV sitcom It’s Always Sunny In Philadelphia) as Will; a website manager that uses his local coffee shop as his office. This deals comically with the clichés and real life habits of coffee shop users; as Will has created his own delicate ecosystem in order to maintain his free-loading existence.

However, this existence is threatened when the shop owners plan to convert the shop into a bar. Will teams up with fellow slouches Chad (Steve Little) and Gino (Ben Schwartz) to hatch a plot to foil the owner’s plans. Will also competes with suave bartender Sam (Josh Groban) for the affections of love interest Becca (Adrianne Palicki). 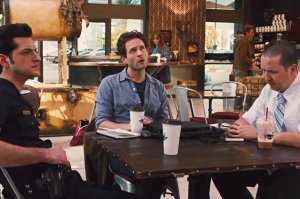 Howerton brings us an assured, warm & funny sitcom performance for the big screen; perhaps not what many would count as a successful transition but in this case it works. Formed from a series of oddball and slightly exaggerated comic performances you could easily compare this film to an episode of the Big Bang Theory or Brooklyn Nine-Nine. Highly watch-able and well paced at 87 minutes long the comedy here reflects on situations many will relate to.

More recently internet giant NetFlix have announced they are developing their own features for release and distribution. With these new distribution paths it is easier than ever for slightly off-beat, small films such as these to get made and reach a larger audience. This may mark the start of the end for the traditional ‘studio’ model as we know it.