Tusk is already released for Pre-Order on DVD in UK. Release date currently 8th June.
Available from Amazon and Zavvi.

@SonyPicturesUK @ThatKevinSmith Are we gonna get @tuskthemovie in the UK? Seeing @justinlong as a walrus isn't a lot to ask for. #TuskUKYes

@SonyPicturesUK how long till I can buy @tuskthemovie? I've been waiting too damn long #TuskUKYes

Tusk is the 2014 horror/comedy from renowned writer/director Kevin Smith.
The plot is spun-off from a story told on one of Smith’s podcasts; loosely based on a fake posting on Gumtree written by UK poet/prankster Chris Parkinson.

Podcaster Wallace (Justin Long) travels to Canada to interview Howard Howe (Michael Parks)about his adventures at sea. However, things take a turn for the sinister when 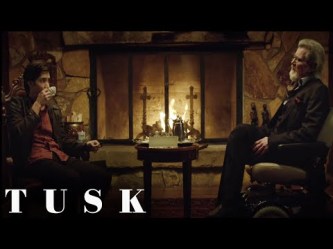 Wallace goes missing and his friend Teddy (Hayley-Joel Osment) and girlfriend Allison (Genesis Rodriguez) must go and find him. The film also features a cameo from Johnny Depp.

IMDb.com initially stated 5th December for UK release but have since pulled this date from the site and no UK cinema chains are currently listing the film.

Smodcast Pictures released the film On Demand on iTunes/Amazon in the US.  DVD/BluRay release was on 30/12/14 in US. You can get a US copy imported from Amazon UK here but a multi region player will be needed to play this in the UK. Signed US copies are also available from Smith’s comic book store online The Secret Stash.

The UK premiere took place at the Leeds Film Festival  on Saturday, 8th November as part of the ‘Fanomenon Day of the Dead’ horror selection. Smith appeared on screen after the film for a Q&A session with fans via Skype.
(This event was covered by Films & Swearing podcast – though not for the faint hearted).

A second UK screening of Tusk took place @ The Electric Cinema, Birmingham on 13th May, 8:30pm.