Cult Television Classic ‘Twin Peaks‘ (1990 – 1991) will be making its long anticipated return to American television in 2016 on Showtime with a new 9 episode series.

The fans (myself included) have waited long enough; it has been 23 long years since Twin Peaks was cancelled in its second season after a precipitous drop off in both viewers and quality. It didn’t help that ABC shuttled the program off to the dead zone of Saturday nights either.

met as teens? How have their lives changed and what are they up to now?

What, exactly happened to FBI agent Dale Cooper (Kyle MacLachlan) in that final scene of Twin Peaks when he looks in the mirror?

And my personal favourite unanswered question…..What did Laura Palmer (Sheryl Lee) mean when she told Cooper that she would see him again in 25 years? – 2016 !!!!!!!!             Did creator David Lynch plan this all along? Or could this all be a wonderful coincidence – I highly doubt it. 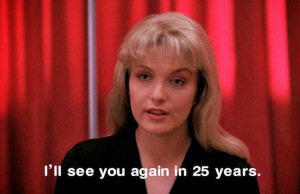 Twin Peaks was ground-breaking for network television and led to the gory and sexual filled ‘Fire Walk with Me‘ the prequel movie (1992) Lynch made after the shows cancellation and showed Laura Palmer’s final days before her death.

With the release of ‘Twin Peaks – The Entire Mystery‘ in the summer (2014), many new and returning fans have had the opportunity to watch, enjoy and indulge in the mysteries of Twin Peaks all over again.

Hopefully the new series which will be a direct continuation of the series and will potentially reunite original cast members with original creators David Lynch and Mark Frost. Kyle MacLachlan has essentially confirmed his return as Agent Dale Cooper on Twitter.

Better fire up that percolator and find my black suit 🙂 #Twinpeaks

So mark 2016 in your calendars as TWIN PEAKS triumphant return to television !!!!!! #DamnGoodCoffee

6 thoughts on “Twin Peaks Returns: Will our questions finally be answered?”