After seeing this film on opening night way back in May, I had this on pre-order straight away. 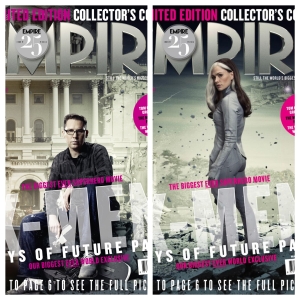 cking collectable covers – showcasing various X-Men characters and Director Bryan Singer. In this boxset 23 of these covers are shown – Bryan Singer & Rogue’s covers have not been included in this set.

This latest instalment of the X-Men Film series shows both Magneto (Ian Mckellen/Michael Fassbender) and Professor Xavier (Patrick Stewart/James McAvoy) teaming up in a bid for survival against the Sentinels. This film joins together the beloved characters from the original “X-Men” film trilogy as sees them join forces with their younger selves from the past, “X-Men: First Class,” in order to change a major historical event and fight in an epic battle that could save their future.

Without giving away too many of the films numerous plot twists and Easter eggs for the viewer – this film is a must see for any fan of the X-Men franchise but also has wide appeal for non-die hard fans.

The special features included on this disc are:-

Overall I would rate the movie 10 out of 10 for bringing back Bryan Singer to the X-Men franchise. Bryan please never leave again WE do not want another case of X-Men 3 !!!!!!!!

This limited edition box set is a must have for collectors, die hard fans and is amazing value – currently at £17.50 !!!!!