The trend in popular documentary film-making of recent years has been the ‘shock and awe’ approach. These are almost (anti)propaganda films in their use of music, graphics and shocking images and boldly covering a wide range of provocative subjects.

It is now also an acceptable and widely used device to include the film-makers difficulties during production in the film itself. Popularised by Michael Moore & Nick Broomfield this technique even forms the basis of MTV’s ‘Catfish: The TV Show‘.

-A classic of the genre this film describes the concept of a corporation as a person in a way that all can understand and uses a series of well documented examples, interviews (including Moore & Noam Chomsky), excellent polished production and graphics.

-Regarded by many as one Michael Moore’s finest works this film blew the lid off Gun Control in U.S. following the aftermath of the Columbine disaster. This film goes a long way to establishing Moore’s trademark confrontational and populist style.

It also features many clever graphics and a South Park style cartoon sequence.

-Here we get to see behind the scenes in a shocking exposé of one of America’s largest corporations. We see candid interviews with ex-staff, customers and those affected in the community.  A relatively low-budget effort (estimated $1,500,000) from director Robert Greenwald (Xanadu).

-Fed Up is a timely & shocking look into the obesity crisis in the U.S. and highlight’s how sugar lobbyists have a detrimental effect on governmental food guideline policy and the resulting effect on children’s health . The film has been widely well received and has even led to celebrities such as Kevin Smith cutting added sugar out of their diet. 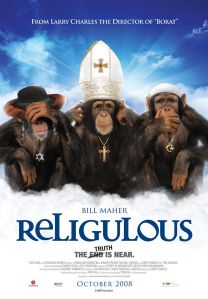 -With a lighter and more laid-back style presented by comic/commentator Bill Maher this film avoids shock tactics and instead lets it’s subjects make their own blunders as it points out the inconsistencies in many major religions.