John recently had his feature-film directorial debut with the horror/comedy ‘Chastity Bites‘. See our full review here. We spoke to John about his film career and his love of technology.

“………no matter how hard it was to make or how it turned out, just take a moment to relish the fact that you did actually make a MOVIE”

How did you get started in film?
In my late 20’s I switched careers (I was a graphic designer) and started as a production assistant on commercials, shorts and features. I bought a Mini-DV camera and started shooting goofy comedy shorts with friends; eventually the scripts got more ambitious and I was submitting shorts to festivals. As I gained confidence as a director I branched out into commercials, music videos and finally my first feature film.

What advice would you give to new film-makers looking to make their first feature?
First off, assemble a great team. We had a great crew that really helped bring this film to life and I was totally reliant on them as a first-time director; the pressure on me was enormous. My producers, assistant director and cinematographer were my main collaborators, and I’m glad they were so experienced and easy to work with. And of course, my wife Lotti was my partner in this endeavour and we work really well together. Always hire people smarter than you are!

Also, if you’re developing the story yourself: start with something simple with only a few characters and locations – think “Evil Dead”, “Cabin Fever”, “Cube”, etc. It’s the best way to stretch a small budget; you simply won’t have the time and resources to do anything bigger than that. That’s actually NOT what we did on “Chastity Bites” – we had lots of characters, locations and special makeup effects to juggle and it was really hard. Ultimately we pulled it off but it was a case of not knowing any better and getting lucky!

Other than Horror, what other genres would you most like to explore?
Science Fiction, definitely. I’m a huge ScFi nerd and I can’t wait to make something in that genre. But I did enjoy working in horror and I may blend elements of it into my future work.

What is Weirdsmobile?
Weirdsmobile Productions is the production company I started it with Lotti after we moved to L.A. We use it as our banner to produce short films, music videos, and “Chastity Bites”. The name is from an obscure line in an old movie, “White Christmas”. We’re not really sure what a ‘weirdsmobile’ really is but it seems to describe us perfectly!

What was the first Apple Mac you owned? And the most recent?

In college I had a Macintosh LCII (the “pizza box”), but the first one I purchased for myself was the G3 Powerbook Bronze/Lombard. I still love that laptop model, with its black finish and swappable drive modules; there was something comforting about having a computer where you could easily access and upgrade ALL the components; now, everything is glued together and hidden behind a hundred tiny screws.

My latest Mac is a 2014 Retina Macbook Pro, the first new machine I’ve bought in five years (I tend to hold onto my Macs for a long time without upgrading). I’m really enjoying the speed and the weight is incredible – I barely notice it in my shoulder bag. I’ve decided I don’t miss a DVD drive at all, happy to have discarded it along with a spinning hard disk to shed a few pounds.

As a self-confessed ‘geek’ & ‘film nerd’ how does it feel to have directed your own feature?
I still pinch myself when I see it mentioned – I can’t believe I finally did it! And it’s still weird to turn on the TV here and see “Chastity Bites” listed in the guide or even catch it right in the middle of the film. That’s another thing I would say to a first time filmmaker: no matter how hard it was to make or how it turned out, just take a moment to relish the fact that you did actually make a MOVIE.

What attracts you to the Macintosh system as opposed to Windows?
I’ve been on Macs for so long (since the late 80’s) that it’s not even a conscious choice any more to use them – it’s just what I do. They’ve always been great for creative work, and I love how easy it is to transfer data between applications and jump seamlessly from print to video to web.

I’ve never actually bothered to learn how to use any version of Windows. Every time I have to touch a PC I get confused and frustrated; it just feels alien.

Were you an early adopter of Apple products such as iPods/iPads?

Yes. I didn’t have the first iPod (Firewire), but I had the 3rd gen model and used it for years. When the iPhone first came out and we saw how easily we could integrate our contacts and check email, we were sold. I also bought the first iPad, and now I have a Kindle Paperwhite too. I’m a bit of a gadget hound.

How did the idea for “Chastity Bites” come about?
My wife Lotti wrote the screenplay (she also produced the film). I had

challenged her to enter a horror screen-writing contest, and she came up with the idea to merge the legend of Elizabeth Bathory with her own personal, liberal views. To me, the idea of a virgin-blood loving countess posing as an abstinence educator was pure genius. Just giving that quick pitch to people always got a laugh, so I knew she was on to something. And she’s a huge horror nerd who really loves the old classics from Hammer Studios, so she put a lot of that old school horror into the script as well.

Were there any major challenges you faced while making this film? And if so, how did you overcome them?

Money and time – never enough of both!

Going back to having good collaborators: I had an amazing production team who really knew how to stretch a dollar. I was always pleasantly surprised when we would have trailers, special lights, hot breakfasts – the kinds of perks you normally go without on a low budget feature. But somehow they pulled it off.

Time was definitely a struggle though. You always start the day with lots of cool ideas and a long shot list; by hour eleven you’re desperately slashing things off the list in order to get even the most basic coverage for your scenes. Most days we made it but sometimes I would let something go only to kick myself later in the editing room for not getting it. You just have to budget your time really well and not plan anything too ambitious if you have a lot to do.

The film arguably flips many of the accepted horror conventions; is this something you embraced?

Oh definitely. Usually the “last girl” is a virgin and the promiscuous ones get killed off, which is this weird convention in horror films that’s like slut shaming in a way. By making virginity a curse rather than a blessing (because the villain can only have virgin blood), it forces the heroine to actively pursue sex in order to protect herself. It flips the script and fits in with the strong feminist message of the film, which is that being sexual (and smart) is not something to be ashamed of.

We also had fun with the male roles in the film, especially the boyfriend, Paul. He’s not a typical male hero who constantly saves the day; he supports our heroine and helps her get to the final battle but ultimately it’s up to her and her female friends to defeat the evil countess.

Was the real life story of Elizabeth Bathory a big influence on the film? 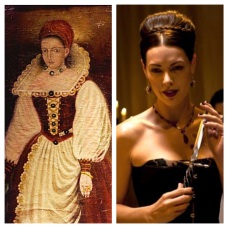 Absolutely. Lotti was always fascinated by her story, and the legends of her using virgin blood to stay young and beautiful. She was eventually walled up in her bedroom and left to die, though in our story we had her escape and become immortal (so long as her virgin blood supply was constant).

The Bathory legend certainly inspired the creation of Dracula and is a big part of the vampire lore in that part of the world, but other than a handful of films she really hasn’t received her due.

Do you feel your interest in technology has helped you in your film career?
Yes, I think so. Certainly my familiarity with editing in Final Cut Pro over the years has taught me how to film things so that they’ll cut together, and being able to generate my own storyboards and concept art is a real bonus. And I’m constantly amazed at how cheap and accessible the tools have become, from digital cameras to special effects software. There’s almost nothing you can’t do yourself on a computer, if you know how to do it.

But I would also caution any first-time film-maker to NOT rely heavily on technology. Good story and characters are what makes a film truly shine, not special effects or flashy editing. And as a director that means working closely with your writer and your actors to figure out how to bring those characters to life; you can’t do that if you’re sitting behind the monitor all the time or worrying about how cool your special effects will be. Focus on what’s in front of the camera, not behind it.

What’s next for you?
I’ve been working on a new SciFi/Horror script which I think will be really fun to make, so hopefully I can get the ball rolling on that soon. And Lotti and I are cooking up some ideas to sate the bloody appetites of our fans, so stay tuned!