We spoke with Tim Mirkovich known for his role as a young Jason Voorhees in Friday the 13th Part VIII: Jason Takes Manhattan but also an established film editor having worked on films such as Pineapple Express and A Haunted House 2.

How did you get into film editing?

My father is an editor, as are my aunt and uncle. I was exposed to the cutting room my whole life. It was never something I thought I wanted to do through high school and college. I got an early opportunity to be a Post PA, and it was there I fell in love with editing in general. I started as an apprentice conforming film and worked my way up from there. It was my second film assistant job- A Man Apart- that I cut a scene after hours just to learn how to use an Avid. Something clicked as the scene began to unfold in front of me, and I knew this was what I wanted to do.
What has been your favourite project?
I’m someone who falls in love with every project I have  done, so it is impossible to choose just one. With every job I have been able to take great stories and new experiences with me. I have been fortunate to work with a lot of collaborative, smart, fun people. Miss March will always hold a special place because it was my first solo studio feature at age 27. The Devil Inside was a ride from the beginning.  Watching  it make tons of money on its way to a huge opening all while getting horrible press and reviews was both amazing and heartbreaking. Pineapple Express and A Haunted House 2 rival each other in terms of flat out daily fun. I’ve never felt more appreciated bringing a director’s vision to the screen than I was of The Frontier, which was a very small movie that made a tremendous small festival run. Every job I’ve had has a unique trait that I enjoy bragging about. I have been extremely lucky to work on so many different things at this stage of my career.
How does editing horror films compare to other genres?
Horror is a lot of fun for me. I have had the good fortune of having experience in all of the genres. With horror specifically,  I relish the manipulation that is involved.  I love the collaborative efforts of sound design and music to help build on these moments.   Every one seems to only remember the jump scares and the set piece type of scene, but the big payoff for me is building and sustaining tension throughout the entire piece.  Making people on edge when there is nothing on the screen and nothing is happening is a challenge. We create our own reality and getting the audience to buy into that takes a unique sense of timing and story telling. Making a slow walk down a 4 foot hallway feel like a 40 foot hallway is much different than quick cutting a joke to get to the punchline, or letting a beat play to watch a tear roll down a cheek.  At the end of the day though, I am helping to tell a story.
You played young Jason in Friday the 13th part 8 – how was this experience?
It was amazing. I was a 10 year old kid, got to miss 3 months of school to go be in a movie. I was not a good actor by any means, but I am honored to have been part of one of the ultimate horror franchises.  How I even ended up in the role involved a lot of luck. I was visiting my father who was cutting the movie in Vancouver, BC. Typically, when he was on location we would stay with him for a few weeks and home study.

The part of Young Jason had already been cast, but they learned after the fact that the boy was unable to swim in the capacity that was needed for the part. It just so happened that I looked nearly identical to him, and I  was flying up to visit on what was to be the first day of shoot.  On the day I arrived, there was not even a stop at the hotel. We were whisked away to set. I was stuck into some very tiny torn shorts, and shot my first scene as a screen test. I guess I did an okay enough to job that I continued on.

Your father (Steve) edited Friday the 13th part 8 have you worked together on any other projects? 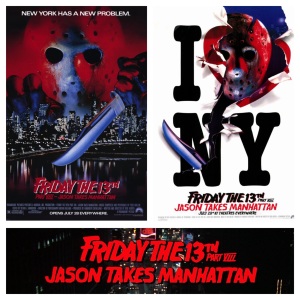 I worked as a PA for him, and as a film assistant for him very early on in my assisting days, but then branched off onto my own. It was very important to me to succeed on my own and establish my own path. I didn’t want to be known as “that editor’s kid”. I worked extremely hard at making my own contacts, and finding my own projects. In 2010, after cutting a few of my own movies we were able to cut a movie together called “The Double” directed by Michael Brandt. We spent 3 months living together in Detroit during production, and another few months back in LA.  It was an awesome experience. While we hadn’t worked in the same room for nearly 10 years, our sensibilities and timing were pretty fluent. It was complete validation for me  that I was able to make it on my own and make him proud. I am hopeful that one day in the future we have the opportunity to work on something else together.

Would you ever revisit acting?

While it would be a lot of fun, I was a horrible kid actor, and I don’t think I’ve improved much. My temp ADR and voice over though in the cutting room is improving. I’d make a really good extra walking in the background.
How does it feel that you portrayed one of the biggest horror villains in history – however briefly?
I am grateful. Jason is iconic. The franchise is iconic. I didn’t understand the scope as a kid. However, as the years go by it is something I am proud of being a small part of.

Are you a fan of horror films?

When I was younger I hated the horror genre. I was scared really easily. I remember seeing Beetlejuice in a theater and having to pretend to go to the bathroom several times when I got too scared. It was a common occurrence in my youth.  When I really started diving more into the horror realm I found myself watching more, and now I really do enjoy watching horror films.  I see a lot of horror movies, and movies in general.  It is hard for me to detach especially when watching a horror thriller.  When I do detach,  I love being scared and I love being made felt uneasy and uncomfortable. I am always looking for new tricks and ideas on how to be scared.  I am by no means a horror savant though.

What’s your favourite film of all time?

In terms of horror-thrillers The Strangers still stands out to me.  It is hard for me to pinpoint a single film as my all time favourite though. Some of the other movies that stand out. Braveheart was the most epic. Avatar in 3D was mind blowingly colorful. Scott Pilgrim vs. the World is one of the most uniquely edited movies with an amazing use of graphics and animation. Zombieland was the most fun I’ve had in a theater. The beach scene in Saving Private Ryan on opening night in a 400 person theater was the most emotional experiences I’ve seen in a cinema.

I am currently the supervising editor and co-producing a new horror series produced by Blumhouse/Sonar Entertainment called “South of Hell”.  In the US it will air on WeTV. The 8 episode series is in post production now. The pilot was directed by Eli Roth, and stars Mena Suvari. It is a unique twist on being possessed. I would expect it to air sometime in the fall.