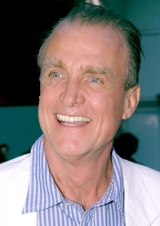 We spoke with actor Marshall Bell known for his role as Coach Schneider in A Nightmare on Elm Street 2 as well playing the iconic characters of George & Kuato in Total Recall (1990) along-side Arnold Schwarzenegger. He has also appeared in many other films and TV shows including memorable roles in Stand By Me & Starship Troopers.

How did you get your start in acting?
Well, it is a long story really…Alan Parker was gearing up for “Birdy” and he was at our place for dinner…My wife Milena Canonero had done the costumes for Midnight Express…and she was working on Cotton Club at the time so she had people over and casting legend Fred Roos was there. Unbeknownst to me Alan told Fred he was looking for a guy to play a roll in his film that was like me…He knew me and I was not an actor…Fred said why not just use me? I read for the roll…got it and bam, I got an agent and off I went.

How do find acting in the horror/sci fi genre’s compared to the others you have worked in?
I don’t really do anything different technique wise…I love the genre

In 1985 you played Coach Schneider in A Nightmare on Elm Street 2 – what memories do you have from the set? 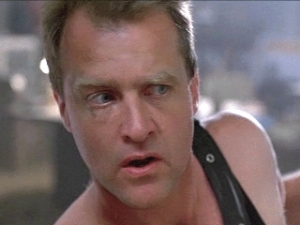 Well, the biggest was my lifelong relationship with Robert Russler (pictured bottom left) and then the five hours it took to glue on the application for the shower gag.

It’s been debated for numerous years that this film had a homosexual undertone – did you pick up on any of this whilst filming?

I don’t do anything when I work but go from A to B if that ends up looking gay, then that is how it rolls.

How did you approach playing the iconic characters of both George & Kuato in Total Recall?

Again, I just went from A to B but it was hard work to not sleep on the week I had to carry around the Kuato application made by genius Rob Bottin.

What was it like working with Arnold Schwarzenegger?
He is a great guy to work with generous at many levels.

What was it like working with director Paul Verhoeven again on Starship Troopers?
Well, we knew each other and he let me go haywire with that little role so it was great…we don’t get to do that all that much

What has been your favourite on screen role?
I like most of them…my biggest and most challenging was in “puncture” a smaller film with Chris Evans.

What is your favourite film of all time?
Probably “The Wild Bunch”.

Do you have any upcoming projects?
Lots of movies “in the can” One with Danny Glover…One with Kate Bosworth, big role…a movie where i play the head of the NRA…a Warren Beatty movie and an Adam Rifkin spectacular…I was in Legends last year with Sean Bean and Allie Larter, great people…Morris Chestnut, Steve Harris…Tina Majorino, great people…Hey, I love my job, it’s that simple.

Interview with Penelope Sudrow from A Nightmare On Elm Street 3: Dream Warriors