We spoke with Ken Kirzinger known for his role as a Jason Voorhees in the New Line horror franchise crossover epic Freddy vs. Jason. He also had a small role in the previous instalment Friday the 13th Part VIII.  Ken has also appeared in many films & TV shows including Wrong Turn 2 & Stan Helsing as well as stunt work on films such as Watchmen, The Cabin In The Woods and the X-Men franchise.

“Playing Jason is a gift that keeps on giving”

What inspired you to become an actor?

I was inspired to become and actor because I loved watching movies as a child and got into stunt work (which was hard enough) secretly hoping I would be discovered and become a famous actor. I guess that happened in a very modest way
How did you become involved in stunt work?

I got into stunt work after I blew my knee out playing college football at The university of British Columbia. I played college football and basketball in Canada and had scholarship offers from Stanford for javelin, Hofstra and Tennessee for basketball and a few other notable universities for sports, but I wanted to stay close to home.

What has been your favourite acting role?
My favourite role has probably been playing Jason. Little did I know what an iconic character I was lucky enough to get. I first wore the costume of Jason in Jason Takes Manhattan, as the Jason stunt double. I also played the Fry Cook who Jason kills and was the stunt coordinator. Other than some nice pay-cheques nothing became of that for me, so when I was asked to play Jason in Freddy vs. Jason I didn’t know it was such a big deal. However since Freddy vs Jason became arguably the most successful of the Jason instalments, I have been humbled by the attention I have gotten, and very appreciative.
Which has been your favourite stunt role?

When people ask me what my favourite stunt role is it’s hard to say, there have been so many. Acting, like stunt work affords us the ability to never grow up. I’ve been a Viking in The 13th Warrior, monsters on The Twilight Zone, MacGyver, Cabin in the Woods, Wrong Turn 2, a super hero on X Men United and on and on. One movie that jumps to mind however was doubling Jeff Goldblum on Hideaway. I broke 2 vertebrae on that movie, but the variety of stunts were fun and the driving I got to do in the opening sequence was challenging to say the least.

You played Jason Voorhees in Freddy Vs Jason how was this experience? 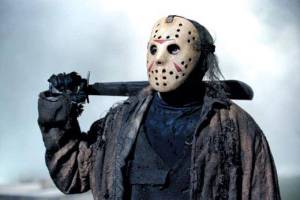 Playing Jason in Freddy vs Jason was one of the easiest jobs I ever had. To be honest I never even read the script. I had no lines, and my own stunt double, all I had to do was be in character and show up for work on time. Actually there was a point when we were over a week into production and they hadn’t given me a contract yet. I had to threaten to quit the show to get them to give me one. That was nerve

wracking because I knew how easily I could be replaced, but I knew how long they had been looking for a new Jason and figured they wouldn’t want to explain how they lost me to Ronny Yu the director. They finally gave me one and the show as they say went on. I never knew why they pushed not giving me a contract for so long or why my union allowed that.

After the movie Robert and I did promotional appearances together and after a radio show interview just prior to San Diego City Comic Con there were a bunch of fans waiting outside. I turned to Robert and said “Could you imagine if this was number one in the box office!?” Well it turns out it was, two weekends in a row! I saw Freddy vs Jason for the first time at an outdoor theatre with over two thousand fans and did a Q and A with Robert after. Going from a lowly stuntman to answering questions for two thousand fans was amazing! Playing Jason is a gift that keeps on giving.

How did you find working with Robert Englund (AKA Freddy Krueger)?
Working with Robert was fantastic! He is a gentleman who can trash talk with the best of them. I often tell fans who bring me posters Robert has signed “Your mine after puck face!” that Robert and I love each other but our characters hate each other. Then I sign the same poster “I won! Get over it!”

He is the Vincent Price of our times, a friend, and along with his beautiful wife Nancy, they are two people I am very proud to say I know.
Would you ever reprise your role as Jason?
If I was lucky enough to get a chance to play Jason again I would do it in a heart beat. I might even read the script this time!
In your mind who won Freddy or Jason?
People often ask me who won Freddy vs Jason. The answer is easy, I won by a head! lol Jason won the battle, I think that’s obvious, but the war isn’t over by a long shot.
Are you a fan of horror films yourself?
I do like horror films, I grew up sneaking out of bed to watch Thriller Chiller Theatre, but at this point I like Sci/Fi, it’s more interesting to me. I was a stunt coordinator for Christopher Nolan on Insomnia and I love what he’s done with Inception and Interstellar.
What’s your favourite movie of all time?
If I had to pick my favourite movie of all time I couldn’t. But if I had to I would have to say Jason vs Freddy, oops did I just take top billing away from Freddy!? lol Sorry Robert.
Who would win in a fight Jason Voorhees or Ken Kirzinger?
In a fight between Jason and Ken it would depend on which Jason. If it was Jason from Freddy vs Jason that would probably be a draw lol. 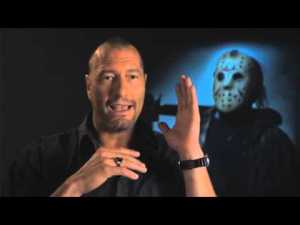 If it was CJ Graham’s Jason I’d be worried, he’s a tough SOB. The rest are great guys as Jason’s go but I think I could handle them. I’ve got the reach and youth on my side lol.
Do you have any upcoming projects?

As far as other projects I’d love people to check out Joy Ride 3 on Netflix now where I play Rusty Nail the psycho truck driver. Lots of good kills! And for fun look for Blackburn. It’s directed by ex stuntman turned director and my friend Lauro Chartrand. Myself and another good friend Brad Loree, who played Michele Myers in Halloween Resurrected appeared in that.