This was our second time attending LFCC – Held at Olympia for the first time since moving from Earls Court last year.

This event is thought to be the largest event of it’s kind to take part in the UK to date and is one of the largest conventions in Europe spanning several halls and floors. As in previous years the event offered autograph & photo opportunities with stars from TV & Film covering a wide variety of interests. The convention had a very high turn-out over all three days with Saturday & Sunday tickets selling out several weeks in advance.

There were also many stalls selling a variety of merchandise as well as areas covering interests such as gaming, cosplay and comic artists. There were also specialist talks and Q&A panels with the stars.

A big feature of this years event was the Back to the Future 30th Anniversary Reunion with many of the film’s cast in attendance including a rare appearance from Michael J Fox and Christopher Lloyd.

Also appearing at the event were several cast members from the film Aliens including Sigourney Weaver, Bill Paxton and Carrie Henn who gave a very enjoyable talk about the film that we attended. We also met cast members Collette Hillier & Trevor Steadman. 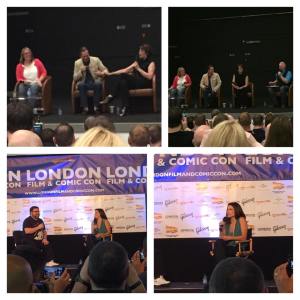 We were also honoured to meet some other stars and artists such as ‘scream queen’ Neve Campbell who gave a great talk covering the breadth of her career as well as legends of horror SFX Tom Savini & Robert Kurtzman.

Here is some of our signed and merchandise from the show:

Please see also this special report from guest writer Doctor Squee about attending the Friday of the convention on a shoe-string budget.