It’s one we never thought we’d see, which is what Big Finish does best. This gap that they are filling in from the Doctors past? The 6th Doctors last adventure.

It seems like a problem that even though Colin Baker did not come back for his regeneration due to a disagreement with the BBC, one was written into Sylvester McCoy’s first adventure (queue Sylve in a dodgy wig!) But a little thing like that doesn’t stop Big Finish… but I’m getting ahead of myself.

In a very familiar format to the 6th Doctors last on-screen adventure in Trial of a Timelord this story is divided into 4 parts. 3 stories from the Doctors past leading to the one set in the ‘now’. Again like the ‘Trial’ story the Timelord’s are meddling whilst claiming not to be and the Valeyard is trying to kill the Doctor.

So on to the first story within the larger one ‘The End of the Line’.

The Doctor and one of his Big Finish companions I’m not best familiar with, Constance find themselves on a train at a station. The station keep springing up with new platforms and the people on the train soon start seeing their doubles and other versions of the same train. The Doctor realises that this is problem with multiple dimensions and that the walls between them have been weakened.

All in all, the kind of story I love; messing with dimensions and the what if’s of our lives if we had taken another path. I’ve listening to this whole adventure twice. The first time I felt distracted from enjoying the stories along the way, as all I wanted to do was impatiently get to the actual meat of how the Doctor gets to his final show down and 6’s ultimate demise. In all of these stories they give clues and lay down the tracks of how the finale goes down, more so with each one, but that can make it harder to concentrate on the story being told as each has its own independent tale. That’s why I would recommend a second listen to everyone. You appreciate the individual stories so much more this way and this was a good one.

The Valeyard is very much an ancillary character in this one popping up at the end, but it’s so tantalising when he does.

They also try to bring in the Master to this story. It’s a good stab at it, but hard to really invest in a Master you don’t know, who is an avatar for the Antony Ainley Master. This is nothing against Chris Finney, who does a good job with the role, I just think that this is a time where someone who can do a good Ainley impression may have been a better choice. With everything going on introducing the Masters avatar as well was a lot to ask for the listening audience to get behind. And Big Finish has proved with the Doctors who are no longer with us, they can successfully use other actors to fill the void. 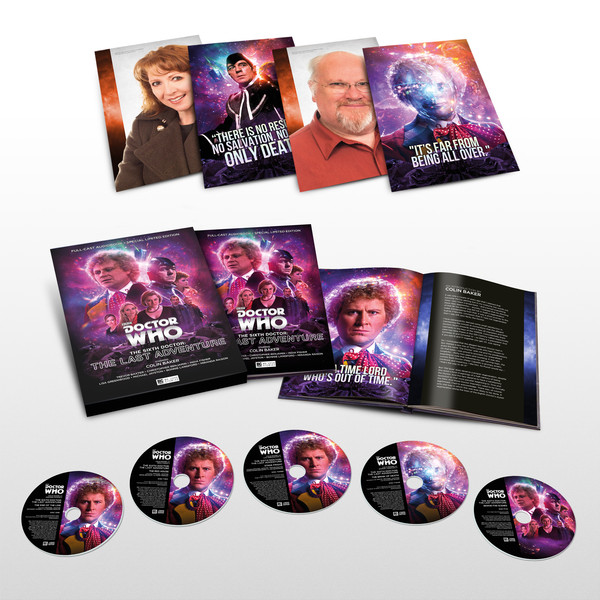 ‘The Red House’ brings in one of my favourite Big Finish Companions, Charley.

She was probably at her best and had her biggest stories with the 8th Doctor, but having her slip a groove in time and spend time with the Doctors past self as the 6th Doctor was a great idea and was a welcome addition to her story, so I was pleased to see this era revisited.

Charley and the Doctor find themselves on a world with reverse werewolves who become primal humans from the peaceful wolf people they usually are (this is as best as I understand it, this is a case where I wish I had some visuals to help tell the story, as this feels very visual).

In this story the Valeyard comes a way out of the shadows to trick Charley into helping him divert the Doctors will to save the werewolf people. Charley thinks she is having them brought for treatment against their will; for the greater peace. The Valeyard it is revealed is just after the device that the humans are using to ‘treat’ the werewolves for his own ends.

This for me is probably the most confused and ‘squeezed’ story. It has such a large story to tell with the werewolves that needs a lot of exposition to fill in the gaps left where this is audio I wish that story could be told on it’s own. Instead it shares the stage with the story of the Valeyard manipulating Charley to get the weapon and the larger story of what the Valeyard’s plans are for defeating the Doctor.

I think ‘Stage Fright’ does a better job of balancing the elements involved.It’s always a pleasure to see Jago & Lightfoot in any Big Finish and the adventures they have enjoyed with the 6th Doctor have been great. The story keeps it simple, the Valeyard is getting people to act as the Doctor’s previous companions to re-enact the Doctor’s previous deaths to syphon off their psychic energies; killing them. This turns out to be just bait to draw the Doctor in, to get his rage and anger so the Valeyard gets steal his negative energy to make himself stronger. But why?

Jago & Lightfoot are used perfectly. The Valeyard has paid to use Jago’s theatre to enact the Doctor’s previous demises and of course the more deaths, the more you can have them turn up on Lightfoots slab!

The Doctors companion Flip is a lot of fun. Again, one I haven’t heard many adventures from (as always, there is just too much Big Finish and too little time!) She is very brassy and comes off as maybe a little facile, but when she saves the Doctor from ultimately his own ego (something you can have a lot of fun with when it comes to the 6th Doctor, especially when it comes to the Valeyard) you know why she is such a good companion. This and the first story that manages to work very well as standalone adventure whilst also progressing the bigger story.

Now we get to the really good stuff (especially on first listen when you want to get to the final show down!). ‘The Brink of Death’

The Valeyard manages to take over the Doctor’s life and leaves him being dissolved in the Maxtrix on the space station where he had been put on trial years before. Everyone in the universe thinks the Valeyard is the Doctor and has never met the colourfully coated version. Lucky for him a young Time Lady in training, Genesta is in charge of shutting down the space station which is being decommissioned. After some persuasion by the Doctor she agrees to help him and pause his deletion from the Matrix. He is able to leave the Matrix (giving credence to his claims to be the rightful Doctor) but his life is still in the balance. Mel is now travelling with the Valeyard thinking him to be her Doctor, though she seems to have doubts about him, like how long have they known each other? She can’t remember.

As the Valeyard grows stronger he is able take over other Timelord body’s and the Doctor comes face to face with him, each time the Vallyard takes a bit more of The Doctors time away and exiles him back to the Matrix with only Genesta to help him back out.

This cracking story with the Doctor fighting for his life comes to its final act. He can’t beat the Valeyard. He is his ultimate nemesis, his own dark side. We find out exactly how everything the Valeyard has done in the previous stories has led to this moment of him taking over the Doctor’s body (I won’t go into all the details, you’ll have to listen to them for yourself!). So the Doctor, assisted by his new friend does the only thing he can, to give up his own life to kill the Valeyard with him.

He telepathically sends a message to himself in the past to steer the Tardis into some radiation that is harmless to humans (just knocks them out) but deadly to Timelords. This way he will be killed before the Valeyard can take over. His only hope is that he might regenerate.

Using sound effects from the 6th Doctors regeneration into the 7th on TV and a cameo from Sylvester McCoy they fill in the gaps of the regeneration whilst not stepping on the continuity of the TV show.

It was such a tall order to have a last adventure that would somehow be satisfying for the 6th Doctor. Especially when we know what happened in the TV show. But I think they have actually been able to exorcise the demons of that damn wig and give Colin Baker’s era the send-off it should have had long ago (though I am sure, and certainly hope he will be in future adventures set before this for Big Finish).

Yes, you did wish that Peri, Evelin and for my money Frobisher had been able to pop up, but of course not only would this have over crowded the story, but it would have meant you couldn’t have used the Valeyard who only come up in the trail of a Timelord after at least Peri’s adventure. And thankfully they already give Evelin the send-off she deserved before Maggie Stables passed away. Also who knows, maybe the big talking bird was just too much awesome for this adventure!

But all in all they crammed a lot into 4 stories in 1. Not being able to do a last adventure was a sore spot for Colin Baker that I can only imagine must now be at least somewhat soothed and you couldn’t hope for a better adversary than the Valeyard to send him off with. And as we all know… His future is in safe hands.

Order now on CD from Amazon or Download from BigFinish.com.

Please take time to check out our other Big Finish & Doctor Who content.

One thought on “Big Finish Review: The Last Adventure (Doctor Who)”