Episode 9 is tilted ‘Sleep No More‘ and will air on Saturday 14 November, BBC One. 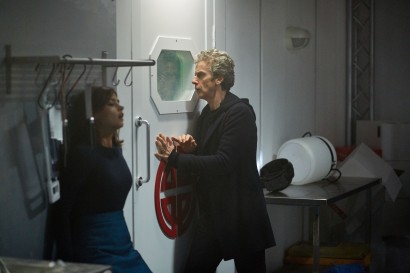 According to the BBC:
“This terrifying story is assembled from footage discovered in the wreckage of Le Verrier Space Station.”

What inspired you to write about an Indo Japanese space station?
I had this idea for a long time – an idea of insomnia first of all, it was something that really interested me. Then the idea of a future world where people are under such pressure to work all the time, they invented the Morpheus machine. When you go in it, it concentrates chemically the benefits of sleeping for 5 minutes, you can then work for a month without going to bed.

Why Indo Japanese?
It’s Indo Japanese because I went to Japan and India last year and I loved the idea of, rather than it being another space station I thought what if something has happened in the far future. I love the idea of fusing the different cultures and that it doesn’t look like an ordinary space station.

Do you prefer writing darker episodes or lighter fun scripts?
I like both, and what I’ve specialised in all my life is a combination of the two. So it’s the two poles of what I do. I think an episode of Doctor Who is always somewhere in the middle, a lot of fun and a lot of laughs, and hopefully some scares!

Do you enjoy being on set and watching your episode come to life?
It’s a funny thing, with Sherlock I’m there every day so it’s a different process to birth it as it were and you’re also there being asked questions all the time. With Doctor Who I’m a visiting writer, I usually come for a day or two tops. It’s always nice to see it coming together and I was really intrigued to see how it would work out because of the found footage idea. I hope people are going to be really surprised by it, because it is really different. I love the variety within the format, there’s nothing like it on television, even a big fantasy show. To shake that up and see it via a different perspective is really exciting.

You’ve worked with Steven on several occasions, what makes you such a successful team?
We’ve been friends for over 20 years, and the first thing we bonded over was Doctor Who. We used to try and convince BBC Executives to bring back Doctor Who, which usually involved pushing them in to a corner. Weirdly they never said yes. It was the founding principles of how we became friends. It’s real fun thrashing things out, throwing ideas around with Steven, he’s got an amazing mind, he’s so stimulating, and if I get stuck on something he will definitely always have a brilliant idea for it.

You’re playing the role of a professor, can you tell us about him?
Professor Rassmussen has created a machine that has changed the very fabric of human existence.  He is very proud of what he has done, but at what cost?

Can you explain your relationship with the Doctor in this episode?
The Doctor arrives on the space laboratory and begins asking some difficult questions in relation to the Professor’s work. The Doctor is a bit of an irritant to the Professor, who doesn’t like his work being questioned.

It’s shot in a very different way from the episodes we’ve seen so-far, was there a lot of discussion on set around the direction?
Time was taken during filming to make sure we never broke the conceit of the episode, and so a lot of time was spent capturing the action from various characters POV’s. It was quite meticulous and the action I think feels very raw and ‘captured’.

What did you initially think of the script?
I knew it had the potential to be very scary, and I was excited to be playing Rassmussen. I felt I knew exactly how Mark had intended it to be delivered. Hopefully I got somewhere near. I had a fantastic time filming the episode and felt really privileged to be part of such an iconic show.

How did you find acting directly in to the eye of the camera?
It’s very odd doing that because it is counter intuitive to the way you film anything else ever! You spend most of filming ignoring the camera, (whilst being very aware of its presence) and never looking right into it.

Have you worked with Peter and Jenna in the past?
I have met Peter a few times socially, but we have never worked together. I had never met Jenna, but the pair of them made me feel very welcome and part of the “Whoniverse.” It is quite daunting going into such an established world, so that was very gracious and lovely of them.