PILLOW FRIGHT is Written and Directed by Patrick Rea as a part of the anthology film FUN SIZE HORROR: VOLUME 2.

Tis the season for great horror shorts and anthologies to supplement your Halloween viewing! One of the most diverse series out now is FUN SIZE HORROR: VOLUME 2. With many distinguished and disturbed filmmakers (including Michael May, Taylor Phillips, Stephen Boyer and Karen Gillan) coming together to be a part of this series, Kansas City based filmmaker Patrick Rea brings his 36th short film (that is on record; look at IMDB including film festival favs COUNTER PARTS and A HOWL OF A GOOD TIME) entitled PILLOW FRIGHT! Known for creating quality shorts at an alarming rate (think Gremlins after water hits them and they eat after midnight) plus working on anthology series THE INVOKING 2 as well as growing features like intense thriller NAILBITER. Rea has proven to peers and fans that his talents go beyond one particular aspect of the horror filmmaking as each project and experience shows film festival programmers, fans and peers why Rea is one of the best in the business. 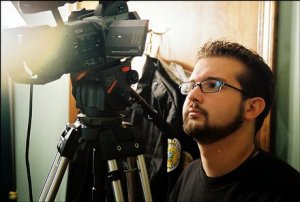 Taking influences from cult classic films like GREMLINS and ATTACK OF THE KILLER TOMOATOES as well as blending in Michael Bay style action with RUBBER’s insanity and a dash of a sexy sleepover, PILLOW FRIGHT is the unchecked yet so tempting treat this Halloween season! As the viewer, Rea takes you to a teenage girl slumber party where the dialogue and behavior is catty and bubbly. The rules of a horror film are so bent as your fantasy of having a pillow fight will never be the same! With just under 6 minutes to play with, Rea creates a rapid fire comfy cozy series of death and dismemberment that will tear the stuffing out of you!

Rea talked about bring the pillow’s revenge to life,

“I decided I didn’t want to do anything with CGI, so we basically did some small amounts of puppetry. I also wanted each pillow to look different to make them distinctive.”

Giving the pillows each a distinctive look, bringing a humanity, intelligence and the focus of vengeance brought a dark heart to this short.

It is never an easy endeavor to blend horror with humour; Rea finds the messed up equilibrium with well-timed jokes and gags (including a great neck flossing) that fit instead of overkill! Plus throw in a very visually pleasing and talented young cast of woman led by the modern day Sigourney Weaver of pillow flame throwing action actress Kristin Rea. I know Halloween is a busy time but PILLOW FRIGHT is 6 minutes you can afford to take and believe me it’s worth it! However, remember the next time you fluff your pillow a little to hard or beat it up, don’t turn your back because it may hit back…