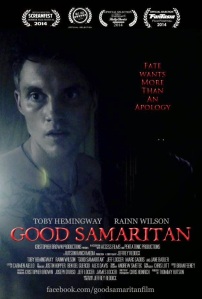 In a voyeuristic world that at any time someone could be watching you from your laptop, inside your car, from their window into your home perhaps even across a field comes the powerful tale of revenge, fear and dealing with guilt from FINAL DESTINATION and TAMARA scribe Jeffrey Reddick entitled the GOOD SAMARTIAN. Known for smart screenwriting that established one of the most successful film franchises in the last twenty years (FINAL DESTINATION series). Reddick takes the helm on this project writing and directing his first short film which focuses a sharp and dark eye on the news/multi-media spin machine’s perception of what is right and wrong in today’s society. The GOOD SAMARTIAN shows us the horror of a generation that would choose to not get involved rather than be able to help those in need.

The GOOD SAMARTIAN revolves around a public beating right in the middle of a park. Opening with a faceless mob, all the viewer sees is the shadows and all they hear is the dialogue of pain and hate. The tragic event is captured on by agoraphobic Nathan (Toby Hemingway) who is house bound. His condition causes him a paralyzing fear to venture outside of his home leaving him to watch and not intervene the killing. Nathan sells his footage to the network news station causing him to receive great amount of criticism for his lack of action and his opportunity to capitalize on the tragic situation. Nathan comes under scrutiny and blame for not helping the victim. 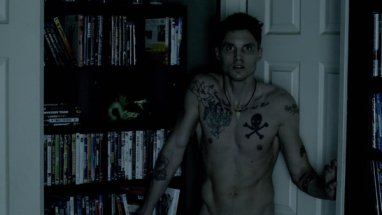 After the live television interview hosted by actor Rainn Wilson (The Office), Nathan looks to settle in and move on with his life pushing away the idea that the other on lookers have died mysteriously. Attempting to sleep, he finds out that the guilt and pain manifest into something that goes bump in the night and reminds us that doing nothing while others are in harm’s way leaves a lasting spirit of revenge. As the presence is felt throughout his home, Nathan battles to survive his deep seeded fears and something that maybe far worse that surrounds him in his home.

The GOOD SAMARTIAN is the debut horror directing effort by screenwriter Jeffrey Reddick. It is what you and I expect from one of the smartest writers in modern horror history taking the idea of the haunted house story to a disturbing level. Reddick who is responsible for “Death’s pattern” in the FINAL DESTINATION franchise handled both the writing and directing duties allowing us into the world where guilt manifests and may kill you! Opening with that faceless mob stomping, punching and kicking their way into another news story, Reddick plotted this 12 minute short film to be as sensory, intelligent and engulfing as possible. From the palpable sound design that keeps your nerves on edge and aware to the tightrope feel of Chris Lott’s score that cultivates the suspense as well as the tense atmosphere that cinematographer Chris Heinrich created, Reddick embraces every detail to make sure that this tale of voyeurism impacts each viewer for different reason. Smart, capturing and well-crafted scares spread out over a foundation of multi-media news hypocrisy shows that Reddick understands what makes us tick and that we are our own nightmares and boogie men dealing with the choices made and the consequences we face.