We spoke with actress Kristine Sutherland; best known for her time on Buffy The Vampire Slayer.

I loved playing Joyce. My mom was a single mom at a time when it wasn’t so very common. Having watched my mother struggle in that role, it was very rich for me to play a single mom and put myself in her shoes.

Truthfully, I just fell into it. I was in love with literature and was planning on majoring in English. One day only to be supportive, I went to an audition for my high school musical with my BFF and we both ended up getting cast. After that first performance I was absolutely hooked. My life took a right turn and it was all about the theatre from then on.

You portrayed the role of Joyce Summers in Buffy the Vampire Slayer – how would you describe this experience?

I loved playing Joyce. My mom was a single mom at a time when it wasn’t so very common. Having watched my mother struggle in that role, it was very rich for me to play a single mom and put myself in her shoes. I think when you get divorced you feel like you have failed a bit as a parent and it makes it harder to figure out your relationships with your children. I love that you see Joyce through Buffy’s eyes. 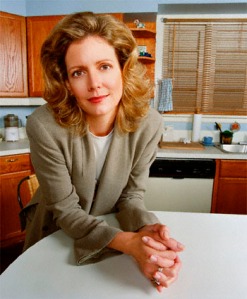 When the series opens their relationship is in a very strained place and Joyce is outside of the center of her daughter’s life. As Buffy gets older, the world goes from black and white to all the shades of adult grey. In those greys, she and Joyce forge a more mature relationship and really rediscover their love and respect for each other. I loved the way that Joss played with that. Buffy is driving me crazy when the series opens. I am worried sick about her and what she is making of her life. Then in Band Candy the whole relationship gets turned upside down and Buffy has to experience what I went through as a parent. Sooooo delicious!

Are you still in touch with any of the cast/crew?

I live in New York and most of the rest of the cast is in LA, so I don’t cross paths with them unless I am at a Buffy convention or event. I really enjoy seeing them at those, as it is great to hang together and to enjoy our wonderful fans. Sarah and I exchange messages every so often and it is lovely to keep up with her.

Which was your favourite episode and why?

I loved doing Band Candy as it was simply so much fun!

But I would have to say that my favourite episode was Innocence. The scene at the end where Buffy decides to not blow out the candles on her birthday cup cake just killed me. I felt her pain and my pain for not being able to fix it. It is an indelible moment to watch your daughter get hurt by life and all you can do is watch and try to be there for them.

I loved that Joyce didn’t ask any questions. She didn’t need to; she knew what had happened because it happens to us all. I wish Joyce had been my mother when that kind of pain happened to me.

How would you describe working with legend Joss Whedon?

Working with Joss on Buffy was a glorious experience. At the time that Buffy came onto the scene, television writing was pretty much formulaic and banal. There were a handful of terrific shows, but for the most part you would audition for a script and think, how the hell am I going to make this horrible dialogue seem like it is coming out of the mouth of a real human being? On Buffy that was never the case. You picked up a script and you couldn’t wait to work on it. Joss was smart, funny and always wrote the unexpected.

Season 5 saw your character diagnosed with a fatal brain tumour – how did you find portraying these distressing scenes?

It was eerie for me, as my mother had a brain aneurism and barely survived it. I think having said that, you can imagine how difficult and personal it was to experience both my illness and my subsequent death.

19 years on since the show first aired and the fans are still loving it! What do you want to say to your fans?

It is humbling to be a part of something that has touched so many people’s lives. The best thing you can hope as an actor is to bring people an experience that illuminates life. I love that it brought so many people such joy and expressed their innermost feelings about growing up. I want to give each and everyone of them a hug and thank them for their loyalty and affection.

How would you describe working with your on screen daughters Sarah Michelle Gellar & Michelle Trachtenberg? 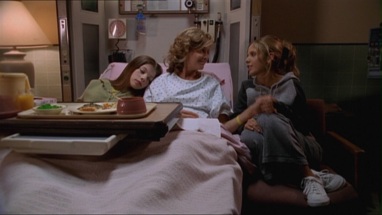 But Sarah was my firstborn. (Lol, as I am not sure that Dawn was ever “born.”) Sarah and I immediately felt a bond. All my scenes were with her in the early episodes of the show, so there was a nice intimacy that I think we both felt from the start. It felt so right…as if it had always been.

I did this small indie film called The Perfect Wedding. It was a family affair and a very personal experience. The producer/writers believed so deeply in the message of the film and it was amazing to be part of the large family that came together to work on it. It was an ideal working environment…no Hollywood ruckus, just telling a story that we all believed in. Working with the late great Jim Rebhorn was truly one of the highlights of my career. He was a good man and a generous and talented actor.

That is so hard as there are so many! I won’t pretend to have a favourite, but I can roll a few off the top of my head. Let’s face it, The Notebook, has to be the most amazing chick film of all time. And every Christmas I watch Jimmy Stewart in It’s A Wonderful Life. What a performance. It is so stylized by today’s standards, but he is so grounded in truth that it is riveting. I am also a huge fan of all films by the Monty Python crew. They are so incredibly smart, creative and funny. And of course, I am a big fan of anything Joss does.

Well, BUFFY of course. I am also a big fan of the BBC Sherlock Holmes at the moment.

I don’t really have a wish list of what I want to play. If the role speaks to me, I am delightfully happy to be a part of a project. I love the collaborative aspect of what we do and I love the story telling. I think stories are how we heal ourselves. They are meaningful to watch and even more meaningful when you get to be one of the storytellers.

Do you have any plans to celebrate the 20th anniversary of Buffy next year?

I hadn’t even thought about it. Has it been 20 years! Oh my… I hope I get a change to celebrate with everyone at some Buffy events around the world. 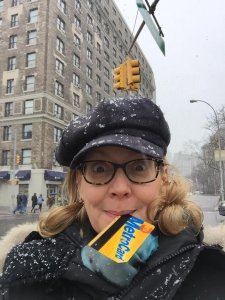 I have been writing a personal project lately, but it is too early to talk about that. I have also been traveling a lot the last year. I had a bit of a health crisis around two years ago and upon rebounding, I have been taking time to examine my life and see what I want to do when I grow up. It is an exciting time…one day I want to go back to school…the next, I see myself traveling around the world for a couple of years with only one suitcase. My daughter bought me a book for my birthday on fitting your personality to a new career. I wish I could become ten people and follow all of my dreams. I am very lucky that I have so many options open to me and I want to experience everything.

I never want to stop acting, but many other things fascinate me as well. Life is short. Sleep when you die!

Check out our previous interviews with Buffy alumni Juliet Landau and Nicholas Brendon !!!!