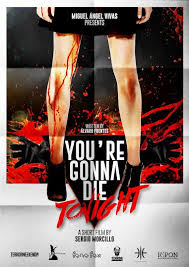 Blended with a twisted sense of justice and a wicked narrative style that makes you change your stance on who is just and who is scum, comes the cat and mouse thriller short film from filmmaker Sergio Morceillo entitled “You’re Gonna Die Tonight” written by Alvaro Fuentes. Opening with little to no exposition to help the viewer understand a woman (Mónica Aragón) arriving at a home from a long night of wild, naughty and nasty fun. Barely standing, she is a product of lust, boozes and attitude by her own rules. With flashes of a sex/fetish club engulfing her pleasuring activities in the bathtub, her climax is disturbed by cell phone calls from a stranger who has eyes on what she is doing and how her threats are hollow as they pronounce to her “You’re Gonna Die Tonight”. As she emerges from the bathroom, the game intensifies with the killer who has entered her house and now is on the hunt for her. With each moment that goes by, the woman must defend her life and also understand the nature of the killer and his motive on why she has been targeted. Are they there to kill her or is there something more to their invasion?

This is Morceillo’s ninth short film; all finding common threads of horror filmmaking. At best this is a fun little horror adventure that for the first 2/3 of the running time is not reinventing the spiked wheel of genre filmmaking. It has the cookie cutter formula of growing tension with the phone calls. It has a pinch of nudity thrown in showing you a mature and lovely woman who plays vixen and victim. It has the impactful score as well as lighting that set the mood as the woman carefully investigates the house in the traditional horror hunt style. The film even has some well-crafted perspective shots that pull your attention for the moment.

These elements help to lead you into some twists for the final 1/3 of the story and are really the savior of this short. This final 1/3 helps to tie up the woman’s backstory (of sorts) and fill in the pieces of the puzzle that were not available to you from the beginning.

For me, the final act not only paid off my patience but in the style of Patricia Chica’s ‘Ceramic Tango’ gave me insight into a portrait of the human monster we are, making me think about who perhaps was right and who was scum. Again, the climax comes with a couple of sweet twists that offer more to the structure of the killers and their motives (think Wes Craven).

My only lingering concern in that final reel is the poor editing that left it about thirty seconds too long. However, hats off to the design team that worked with Morceillo and the bad ass costume and mask the killer wore throughout the home invasion harking back to the mask influenced by ‘Nightbreed’s‘ Dr. Philip K. Decker. If you love home invasion and revenge horror like ‘You’re Next‘ with a smidge of ‘When a Stranger Calls‘ and ‘Scream‘, this is for you to savour.