Suicide Squad is a 2016 American superhero film based on the DC Comics antihero team of the same name.

Written and directed by David Ayer and distributed by Warner Bros. Pictures, it is the third installment in the DC Extended Universe.

In Suicide Squad, a secret government agency led by Amanda Waller (Viola Davis) recruits imprisoned super-villains to execute dangerous black ops missions and save the world from a powerful threat in exchange for clemency.

Lewis: I LOVED IT !!!! I was totally immersed in the story which was excellently performed by all the cast. I was originally sceptical with some of the casting decisions – but as soon as the film started I was mesmerised.

The ‘backstories’ of some of the squad were extremely well filmed/acted – it was like being transported into the comics. Margot Robbie in particular provided an amazing performance in her role as abused girlfriend Harley Quinn. Her scenes with The Joker aka Mr Jared Leto had me on the brink of tears on more than one occasion – and automatically turned me back into a child watching Batman: The Animated Series on a Saturday Morning.

Will Smith you are officially forgiven in my eyes for Wild Wild West !!!!!!

The films soundtrack was also a high point for me – providing many similarities and edge of the Deadpool soundtrack. If you haven’t already, check out the S.S soundtrack here!!!!!

This film is definitely my favourite of the DC extended universe by far – I just hope that the sequel pushes the envelope more and gets the 18 rating this film needed to give it a 5/5.

Ben: David Ayer has made his mark on the DC extended universe in a similar way to what Tim Miller did with ‘Deadpool’ although DC have held back from going all out with this film and kept a 15 rating. I feel this is some-what of a disappointment as there are many elements that will not make sense to younger viewers yet the language and violence was toned down from what some die-hard fans would have liked to see.

Visually the film offered a lot of excitement with fun-busting action sequences that were worthy of any block-buster thriller as well some fun graphics and comic book easter egg references although some of these sequences seemed to happen so fast it feels like some of the violence may have been cut out to keep the 15 rating.

In terms of the 3D effects there is not much excitement here apart from the eye-catching graphic sequences & titles.

I enjoyed almost all the performances however I felt Jared Leto’s joker lacked then humour of Mark Hamill (Batman: The Animated Series) and was geared towards the more psychological performance of Heath Ledger (The Dark Knight).

Will Smith I had initially thought to be pure ‘star casting’ but he actually delivered a well measured performance as Deadshot and didn’t draw too much attention from the other characters although he does play a key role in the story and has a lot of screen time.

We are also treated to some great scenes with Ben Affleck’s Batman which has been one of the most exciting things to come out of the DC extended universe so far and this film does not disappoint! 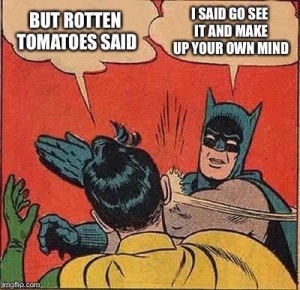 You can now pre-order Suicide Squad from Amazon.