The British actor who played R2-D2 in the Star Wars films has died at the age of 83 after a long illness. 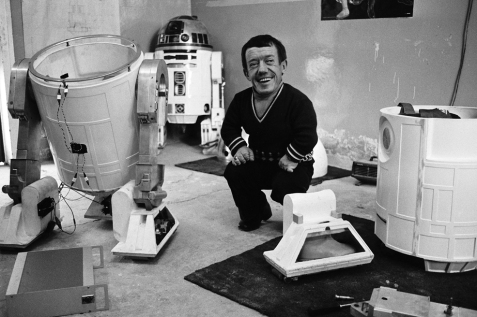 Kenny Baker, who was 3ft 8in tall, shot to fame in 1977 when he first played the robot character.

Baker went on to play the character in The Empire Strikes Back and Return of the Jedi, as well as the three Star Wars prequels from 1999 to 2005.

When the seventh installment ‘The Force Awakens‘ was released in 2015 Baker was credited as “consultant” for R2-D2 though he was originally announced as part of the cast.

His niece, Abigail Shield, paid tribute to her uncle. She told the Guardian:

“It was expected, but it’s sad nonetheless. He had a very long and fulfilled life. He brought lots of happiness to people and we’ll be celebrating the fact that he was well loved throughout the world. We’re all very proud of what he achieved in his lifetime”.

“When he was a child, he was told that he probably wouldn’t survive through puberty, being a little person in those times, they didn’t have a very good life expectancy. He did extremely well in his life. He was very ill for the last few years so we had been expecting it. He had been looked after by one of his nephews, who found him on Saturday morning.”

“He had problems with his lungs and was often in a wheelchair. He was very poorly for a long time. He was asked to go out to LA for the new Star Wars premiere but he was told he was too ill to travel. Luckily he did manage to meet George Lucas again when he came to Manchester.”

He started performing in 1950 at the age of 16 when he joined the Burton Lester’s Midgets as a performer. Shortly after he became a DJ with Mecca Organisation before joining Billy Smart’s Circus as a clown and shadow Ringmaster. Later in his career he toured the country for 9 years doing panto and ice shows, where he met Queen Elizabeth II. After leaving the ice, he formed a musical comedy act: The Mini Tones. It was in the Mini Tones that Baker met another performer named Jack Purvis (13 July 1937 – 21 November 1997) and the pair developed their own song and dance night club act.

When filmmaker George Lucas came to England in the mid-1970’s to begin casting for Star Wars, Baker and Purvis both heard of the casting call for little people actors.

Purvis was awarded the part of the Jawa leader, while Baker gained the plum part of R2-D2.  Fitted in the claustrophobic robot shell, Baker was responsible for operating R2-D2’s controls and sounds, as well as guiding the little robot’s movements via a small control panel within the robot.  Suffering intense heat during location shoots in the desert, as well as continuous technical difficulties related to the control panels, not to mention getting stuck within the R2-D2  unit on a number of occasions, playing R2-D2 was no easy task for the actor.

Yet, despite these many difficulties, Kenny Baker endured and managed to give the little robot a unique personality, and made him a favourite for film audiences and would continue to play R2-D2 in both trilogies, as well as other TV appearances, documentaries and special TV commercials.  Baker also doubled in The Return of the Jedi where he played Paploo the Ewok. 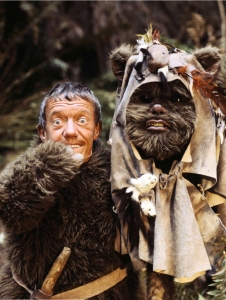 It was also as R2-D2 that Kenny Baker put his “tread marks” down in cement at Grauman’s Chinese Theatre alongside Anthony Daniels in his C3PO suit and David Prowse in his Darth Vader costume in a 1977 ceremony. 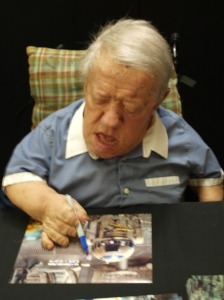 Post Star Wars – Baker was extremely proud of his work including his comedic work.

“I have worked with many comedians including Dickie Henderson, Leslie Crowther, Ken Dodd (as a Diddyman), Little and Large, Russ Abbot, Ben Elton, Dick Emery and Dave Allen […] and even met Laurel and Hardy!” – Kenny Baker. 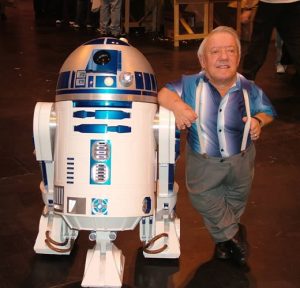