It’s another moment when Big Finish find something new to do you never would have thought of and you suddenly realise it’s what you never knew you always wanted.
Since they have gone down the road of ‘The New Adventures of Bernice Summerfield’ it’s been great to see the Doctor paired with Bernice and how they have managed to keep Bernice as the central character without lessening the Doctor. But to then throw in a whole new universe from a range that hasn’t had a release in 8 years, it’s both insane and genius! 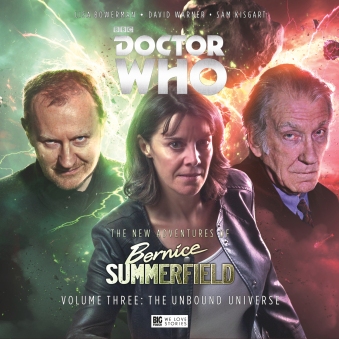 “This really feels like an ambitious collection of stories that each work on their own but also feel like part of one bigger story that doesn’t get lost in the mix. The whole cast and crew behind this story are on their A game to say the least.”

It’s a great opening as Benny see’s the Tardis open and is not surprised to see a Doctor with another face. For her it only gets weird when the Doctor takes her to a new, dying universe which he comes from. What has happened to the universe is never full explained, but we are left to assume they have had a very different version of the time war that has had different and even worse consequences.

In the first story ‘The Library in the Body’; the place where everyone is rushing to in this dying universe is a library with all the knowledge of the universe that is free to all who come as knowledge is for all. Some have come for the knowledge, some to steal the books, others because they blame knowledge for the imminent destruction of the universe. The library concept reminds me a lot of the library in the Tennent era ‘Silence in the Library’ and has that same lovely concept of a place designed to better everyone in the universe being made into a place of danger. It’s also a nice backdrop to rediscover this Doctor and to sow some seeds that make you question how much he is like our Doctor and how much has changed since we last saw this version. A journey we go on with Benny. New universe, new rules. There is also a nice tease of a certain villain’s return.

‘Planet X’ begins with the Doctor asking Bernice where she would like to go next, anywhere, as long as it’s within the very limited reach of a much-ailing Tardis. She of course picks the one planet the Doctor doesn’t want to go to… the dull one. Named ‘Planet X’; it is a planet that makes sure nothing happens that is too interesting and no one gets too excited or emotional. In this way they have been kept out of the war that has ravaged the universe but as the Doctor and Bernice soon discover there is a high cost for safety when no one is allowed to achieve above average.

‘The Very Dark Thing’ shows the weirdest this universe has to offer. Dangerous unicorns, singing rivers and invading forces that no one can here. Whilst Bernice is hearing the attack warnings from above that no one else can, the Doctor is more concerned with the music he can hear from the river that he wished he could place. This gives another nice opportunity for Bernice to fully take the lead and for us to again question how effective this Doctor is. It also gives us a very quirky backdrop to what very soon spirals in to one of the darker stories of this universes war.

Finally ‘The Emporium at the End’ gives us the Master story we have been waiting for in this set with veteran actor Sam Kisgard as the Master posing as ‘the Manager’. As we have further reason to believe the unbound Doctor may not be the Doctor we know and love, we are also given reason to think this Master might not be the force for evil we would expect. We are presented with a shop at the final end of the universe (a little Douglas Adams like) that as well as all the shopping opportunities you could wish for, is offering a lottery for escape into our universe, but the price for tickets is high and if you don’t have the universal credits the price gets even higher. The Manager is also keen to get to know Benny and gives her more information on what has been happening in this world. Could it be that the Doctor is not to be trusted and the Master really is to be the saviour of the universe? And why is the Doctor struggling so much to remember his old foe?

David Warner is and always was going to be an interesting Doctor and they manage to turn the amount of time since the original unbound releases into a reason why we don’t know him, as we might have if this box-set had happened earlier. The interaction between Lisa Bowerman as Benny and the unbound Doctor is magical and just feels right. I feel like this box-set also showcases just how much Benny has changed since we first met her in the virgin novels. Could a younger Bernice Summerfield have dealt with a Doctor she has to learn to trust with such maturity and at the same time face the Master? Speaking of the Master (or The Manager); Kisgard may have the reputation of somewhat of an old ham, but in the final story he puts in a really solid performance and only sometimes sounds like a character from ‘The League of Gentlemen’. There are also a lot of other brilliant supporting characters such as singing nuns, whose tunes are made up of numbers they believe can heal the universe, a little similar to Logopolis computational mathematics and a cyborg and his child all of which add lots of texture to this universe. This really feels like an ambitious collection of stories that each work on their own but also feel like part of one bigger story that doesn’t get lost in the mix. The whole cast and crew behind this story are on their A game to say the least.

James Goss as the producer has worked allegories into this set that mirror classic Doctor Who shows; most of which you might not pick up on until you listen to the bonus features. As above I believe these stories also bring to mind Logopolis and Silence in the Library, though these are not mentioned in the bonus features.

It looks like Benny and David Warner’s Doctor, without wishing to give any spoilers, are left in a position where we could very well see them in the next set together and I’m left very thankful for that, as it’s a pairing too good not to use at least one more time. I give this 10/10 sonics!

You can pick up the boxset here https://www.bigfinish.com/releases/v/the-new-adventures-of-bernice-summerfield-volume-03-the-unbound-universe-1458?range=20

You can also hear interviews with Lisa Bowerman and James Goss with me on Gallifrey Stands podcast here http://gallifreystandspodcast.podbean.com/.