Based on the 1960’s Batman TV series, the film stars Adam West, Burt Ward, and Julie Newmar reprising their roles of Batman, Robin, and Catwoman from the series.

Originally intended to be released directly to home media, the film premiered at the New York Comic Con on October 6, 2016.

The film hit UK cinema’s for a special one-night-only event – following the success of The Killing Joke cinema screenings earlier this year.

It’s back to the 1960s as Batman and Robin spring into action when Gotham City is threatened by a quartet of Batman’s most fiendish foes – Penguin (William Salyers), The Joker (Jeff Bergman), Riddler (Wally Wingert) and Catwoman.

This time, the four Super-Villains have combined their wicked talents to hatch a plot so nefarious that the Dynamic Duo will need to go to outer space (and back) to foil their arch enemies and restore order in Gotham City. 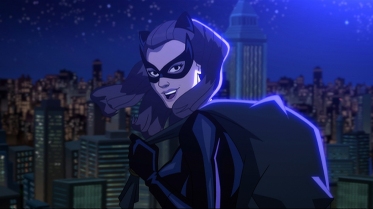 It’s a truly fantastic adventure that will pit good against evil, good against good, evil against evil … and feature two words that exponentially raise the stakes for both sides: Replicator Ray. Holy Multiplication Tables!!!!!!

Lewis: I really enjoyed this animated outing for the 60’s ‘Bat-gang’. The use of past and present ‘Bat-Gags’ and Easter-eggs had both myself and the cinema audience in fits of laughter. Both visually and vocally this film exceeded my expectations – which honestly after ‘The Killing Joke’ was low! I for one can not wait for the sequel. In the meantime I’ll be digging out the DVDs of the Classic show and having a nostalgic binge watch !!!!! 4/5 Bat-Signals !!!!

Ben: With this film DC have done their best to please fans of the classic Batman series with the same deadpan wit. Visually however the film is more a delightful mix of the 60’s show as well as a strong nod to the original Batman comics. The normal DC Animation intro is replaced with a more retro opening sequence which even has nods to comic covers and we even get to see a classic WB Animation logo. The film is littered with Adam West’s signature gags and one lines (admittedly some of these landed better with audience than other).

The first half of the film is a classic Batman caper; however I felt the third act was where the script really shone. Without giving away too much we get to see a darker side of our ‘Caped crusader’  in a finale that is both emotional and comic gold.  All-in-all a strong animated & big screen debut for the 60’s Batman. 4/5

A sequel was announced during the world premiere screening of the animated film at New York Comic-Con.

William Shatner is set to explore his villainous side – the Star Trek icon will voice Two-Face in the sequel.

Two-Face is a very interesting addition to the sequel as the character never appeared in the original Batman television series (1966–1968). Science-fiction writer Harlan Ellison turned in an outline for a story that would have introduced Two-Face, but it never made it to air. 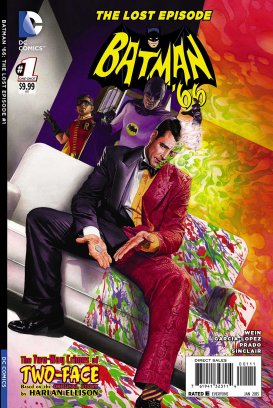 If you can’t wait till then – the film will be available to stream from Amazon video – release date October 24th.