Now this one was released during the Christmas period, but my, what a perfect way to kick of the new year!

River Song (Alex Kingston) is paired with not 1, but 2 Doctors in this set; those being 6 & 7, Colin Baker and Sylvester McCoy. And they manage to do it without River taking a back seat at anytime. Of course it helps when you have as strong a character as River, but it would be easy to have a writer accidentally turn it into a Doctor Who set by another name, this does not happen. 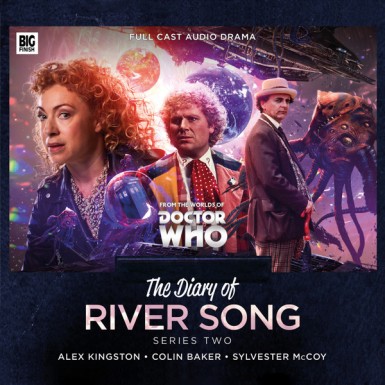 We start off with the Guy Adams penned ‘The Unknown’. A story in which River and the 7th Doctor find themselves trapped on a space ship with time and reality unravelling and even their own memories starting to fail. River knows this Doctor fella is familiar but why and how. It’s very hard to say too much more about this one without spoilers, but I will say it is nice to have a good reason baked in from the beginning of this set why the earlier Doctors might not remember River. They do use other devices as well; but this is a good one. It also sets up that the Earth is in danger.

In ‘Five Twenty-Nine’- John Dorney continues on from the events of the last story with River chasing whatever is happening to unravel the Earth. Something is going across the earth and disappearing people as soon as time catches up with them. River knows she won’t be able to stop it; but can she save even a few lives? Her attempt to do this centres around an older couple with an android daughter. I think the biggest props on this one go to Salome Haertel, Alex Kingston’s own daughter who plays the android daughter in this one. I think this is one of the hardest types of role to nail as an actor. Actors by their nature want to do more and add emotional depth; so what a challenge to make you care about a character who cannot feel any emotion? It reminds me of Leela from the original run of Who, where she could have so easily been a one note character if it wasn’t for the excellent writing and portrayal of Louise Jameson. This may be my favourite story in the set and given that it is the one without the Doctor, that speaks volumes about how well they have written River and these stories.

‘World Enough and Time’ by James Goss sees River bumping into sixth Doctor Colin Baker. She is a the feisty new intern, he is the CEO and the company they are in; Golden Futures, is in the business of giving people dreams. In true Doctor Who style though, what dreams may come?

This one is worth it for the interaction between River and the 6th Doctor alone. Not when they are off fighting the bad guys or solving the mysteries of Golden Futures; but just when they are flirting and playing with each other. The way they showcase the 6th Doctors lighter side and the poetic side that was often given short shrift in the TV show. And it’s just nice to see the 6th Doctor getting to be romantic. The idea of the 6th Doctor being a CEO is also very enjoyable.

Finally Matt Fitton gives us ‘The Eye Of The Storm’ as the name suggests, we head to the conclusion of this set, with the 2 Doctors ending up in the same time zone as River. So whilst saving the Earth with one Doctor in 1703, she must also persuade the other one to leave so as not to further add weakness to time. We also find out a lot more about why things are happening; but you know, spoilers sweetie! Sufficed to say, they manage to do not only a multi Doctor story, but without River losing overall control of the story. Yes, the Doctors at least have equal amounts to do; but without taking over. This is a delicate balancing act but done very well. 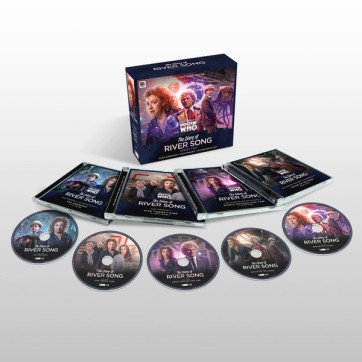 In conclusion this is an amazing boxset that brings one of the most exciting years of releases from Big Finish to a close. Alex Kingston proves that is doesn’t matter which Doctor you throw at her, she will always be their perfect wife and counter. And to have her real life daughter to come in and hold her own against such Doctor Who legends must make her so proud. I would love to single out some more of the cast list from this, but read the cast list, they are all great!

I have felt the need to say this a lot with all the Doctor Who goodies from Big Finish in 2016, but you need to own this.

The set is available initially on download only with a CD release coming in January 2017.
Download here: https://www.bigfinish.com/releases/v/the-diary-of-river-song-series-02-1471

One thought on “Review – The Diary of River Song: Series 2”