Spoiler Warning!!!! This post may contain spoilers for Doctor Who Season 10
Filming has begun on the final two episodes of Doctor Who series 10, in Cardiff. 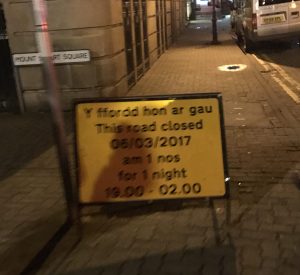 During an evening shoot on 6th March 2017 – Pearl Mackie was seen filming for the upcoming series finale.

Also on set during filming were various incarnations of the Doctors classic foe The Cybermen.

These incarnations included the Mondasian Cybermen which was revealed by the BBC in official photos earlier that day (6th March).

During the shoot and Pearl’s AKA Bill’s scenes; the phrase “Return to the hospital” was being repeated as “The converted” walked zombie-like through the deserted streets.

The tenth series of the British science fiction television programme began filming in June 2016 and will air on April 15th 2017 on BBC One.

This will be the last series for Peter Capaldi as The Doctor as he will be leaving during the 2017 Christmas special.