Since the launch of the modern day UNIT range, they have always gone big. Stories that feel ‘action-packed’ and with great drama all with the UNIT team of today. Only one thing they haven’t done… bring back the classic UNIT crew. Now that particular box can be ticked too. 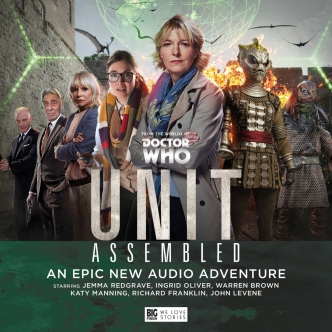 A Call to Arms by Matt Fitton

Right from the start we are in on a great story that brings to mind the old war or even cowboy movies where a group of old soldiers come back together for one last time to battle an old enemy. This time the enemy is a group of Silurians with a grudge against UNIT who turn up at Sgt. John Benton’s retirement party (not from the army, but from the pub he’s been running with his wife since leaving the army). Benton (John Levene) is joined by Cpt. Mike Yates (Richard Franklin) and a couple of theeir former comrades in arms as well as Kate Stewart (Jemma Redgrave) and Osgood (Ingrid Oliver) from the new UNIT team. Straight off the bat this team up is electrifying; Osgood and even Stewart to a degree being so impressed by seeing their childhood hero’s in action. The UNIT old guard show they still have some tricks up there sleeve’s whilst being in turn impressed by the way new UNIT handles themselves. Add to this the backdrop of an evil, militaristic Silurian by the name of Jastrok (Richard Hope) stalking the group and you are in for something special.

Not letting the pace down one bit, we are now faced with the other surviving UNIT member we have yet to see, Jo Jones Nee Grant (Katy Manning). Now an ego warrior, as seen in the Sarah Jane Adventures, Kate Stewart personally goes out looking for her to help them assess a new eco powered generator UNIT is testing. There is again plenty of opportunity for fan service from Osgood at meeting THE Jo Jones. And once they are in the water we are then faced with another classic baddie which Jo has a personal stake in trying to make peace with; the Sea Devils. Another hedonistic fan-gasm worthy story that adds a new layer by seeing the modern female face of UNIT meet the lady who was being amazing when woman didn’t often get the chance and they were in nappies.

In this story we follow the main storyline of the set and for the time being lose our heroes of yesterday.

Stewart and Osgood go to the Mediterranean in search of a weapon to fight the reptile uprising but find themselves in a grudge match between them and Silurian warrior Commander Tryska (Neve McIntosh) who will stop at nothing to kill them and protect the Silurian’s weaponry and the secrets it contains.

Having Neve McIntosh show up really is the icing on the cake. Yes, I kind of missed this story having a legacy UNIT character in it, as per the theme of the boxset; but certainly not a bad replacement.

If I did miss the old UNIT team last story, this one sure makes up for it. As the Silurian aggressors build up toward their endgame they demand Britain’s surrender so they can use our country as a launching pad to take over the world. What stands in their way? UNIT’s finest from this generation and the last. The lizards don’t stand a chance.

This is a spectacular set. It does great credit and respect to the legacy characters they use. They aren’t just given token parts to play with weak excuses to ‘shoe-horn’ them in. Thought has gone into who they were and who they might now be and a good dose of the actors seems to creep in too. For instance anyone who has seen John Levene at a con will know he loves to entertain and be a showman and right at the beginning we have him entertaining the assembled at his retirement bash with a speech, but at the same time, when he needs to be he knuckles down as the sergeant and gets the job done. Richard Franklin is often soft spoken and charming as he gets to be in this role; but when he needs to command the Captain is in charge. And finally Jo Grant, the eternal hippy would of course be trying to save the planet; but she is doing it with Katy Manning’s lovely sense of humour and maybe a little of her naughty flirtatious side too.

However that does not mean the new UNIT takes a back seat. This is still very much Kate Stewart’s mission with Osgood coming up with the scientific goods. Then they all meet and it’s just as wonderful as you would hope. The new team didn’t need to be handed a torch as they are already running with it; but it’s still nice to see them get and give respect to those that began it. I like to think Nicholas Courtney and the Brigadier would be proud of this.

Finally I just have to praise the production team. Four magical stories from Matt Fitton and Guy Adams. Spot on direction and pacing from Ken Bentley who has ‘assembled’ a perfect cast. There is also so many nods to the past that as audio they trust to the theatre of the mind. Ken Bentley talks of how they put Bessie into the story in the extras. To anyone not so familiar with the classic series, they are just talking about a car. For the rest of us this is almost enough to bring a tear to the eye. The little touches in the voice work of the Silurians remind me of the new breed and some of the classic voices for them and the Sea Devils as voiced on this occasion by Nicholas Briggs.

I have no problem in giving this 5 rounds rapid and another 5 to spare (or 10/10 to keep it simple!)

Out to buy now, here on CD or download https://www.bigfinish.com/releases/v/unit—assembled-1211