We spoke with actor/creature performer Jamie Hill who has appeared in several episodes of the modern series of Doctor Who. He has played many monsters on the show such as the Monk from Mummy on The Orient Express, The Silence & more recently The Foretold in Series 11.

“…..being able to be part of such an amazing show and perform as another Doctor Who monster is all worth it!”

How did you first get involved in the world of Doctor Who?

I first got involved in Doctor Who when I was rushing to my University lecture late in my 2nd year of University. James Dehaviland, the 2nd Assistant Director [for Doctor Who] approached me and asked me for my height…later that night a car picked me up from my student accommodation in Cardiff and took me for my measurements. A couple of days later I went to Millenium FX workshop near London to try on the Silence mask. Once everyone was happy I got the part as one of the Silence, playing alongside Marnix Van Den Broeke (Main Silence). 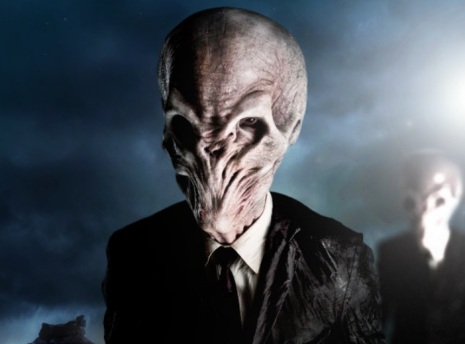 After filming for Series 6 I was then asked to go all the way to Melbourne, Australia to be part of the Doctor Who Symphonic Spectacular. This has led to more and more parts throughout leaving University, including many different live events and four different monsters in Series 10!

How aware were you of the Doctor Who mythology before becoming a part of it?

I was aware of Doctor Who before becoming a part of it, but had never watched a full episode.

Over the years you have portrayed many ‘Monsters’ on Doctor who. Which have been your personal favourites?

My personal favourites have to be the Silence, for allowing me to get into this crazy creature-performing world, and also the Foretold for being my first credited role which has led to more and more work.

How difficult is it to perform in heavy costumes and prosthetics?

It does take a lot of work to perform in different costumes. The Monk was around 2-3 hours of prosthetics glued onto my face every morning, which does take it out of you (especially as I don’t like mornings) but being able to be part of such an amazing show and perform as another Doctor Who monster is all worth it. The heaviest costume I have worked in has to be the Ice Warrior – these are made from a material called PT Flex, and due to the shape of the chest piece, was very hard work, especially on the back and shoulders.

You have featured heavily in series 10 portraying several ‘Monsters’ – what is it like working with the current TARDIS Team Peter, Pearl & Matt?

To have the opportunity to work with Peter Capaldi again was absolutely amazing. We had a great time whilst filming ‘Mummy on the Orient Express’, so to be able to work with him again was great. Matt Lucas is just as funny in person as he is in his other TV shows, and definitely kept the humour going on set, and being able to work with Pearl Mackie as the latest companion was amazing; she is one of the nicest people I have had the chance to work with, and to watch her act is just brilliant!

How has your experience been meeting fans of the show?

All my experiences meeting fans of the show have been amazing, I feel that I am such a small part of Doctor Who as a whole, but to see the impact the characters I play have on fans’ enjoyment of each episode makes all the hard work worth while.
I do get to meet a lot of fans in my place of work (the Doctor Who Experience) although I think I still seem to slip by unrecognised; which is probably best whilst in work!

Probably True Romance – although I never seem to have a favourite of anything.

I don’t really have a favourite TV show – but am in the middle of catching up with Game of Thrones, so would have to say that!

After Doctor Who this year, I would love to be part of the Star Wars films in some form; either playing a robot, monster, or any creature. To work on a film after Doctor Who would be amazing.

At the moment I am being booked in for quite a few conventions, so am focusing on them, as well as getting together a show reel of all my parts in Doctor Who to send out to other productions.