In Pursuit of Silence is a documentary from director Patrick Shen. 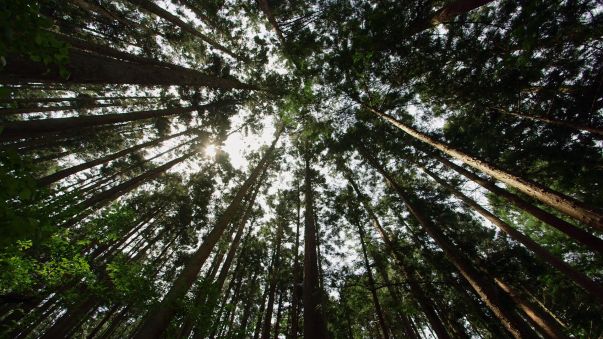 “…a meditative exploration of our relationship with silence, sound and the impact of noise on our lives. Beginning with an ode to John Cage’s ground-breaking composition 4’33”, In Pursuit of Silence takes us on an immersive cinematic journey around the globe– from a traditional tea ceremony in Kyoto, to the streets of the loudest city on the planet, Mumbai during the wild festival season – and inspires us to experience silence and celebrate the wonders of our world”

From the offset, it’s clear this film is high-concept, broad & avant-garde in it’s scope and presentation right from the off as we open with 4’33” of silence and imagery (an ode to the John Cage piece 4’33”). I’m sure this would play great at a screening (as the original piece was designed with an audience in mind) but this may be considerably less effective on home media.

There is some really breath-taking imagery here; but also some far more mundane shots (a static shot of some trees for example) that are held for far too long in my opinion. A challenging balance to be made between visuals and sound here; clearly a lot of attention has been paid to the sound design which employs long stretches of silence, subtle background noises and light scoring to great effect.

Boldly, the film makes no attempt to set it’s store at first….letting it’s intentions & subject matter dawn on us more slowly. Acting as a study of silence in all it’s forms (and solitude as a bi-product) and it’s effects on the human psyche; with some inclusion of scientific views with an end-result that is truly thought-provoking.

As an art film this is a success but if you are hoping for any form of story telling or structure that is lacking here.