The First Doctor is back, but maybe not the one you might expect! Yes, David Bradley reprises his role of the First Doctor from ‘An Adventure in Time & Space’ (then technically as William Hartnell) and Twice Upon a Time. Joined by his Tardis crew from ‘An Adventure in Time & Space’ Claudia Grant (Susan), Jamie Glover (Ian Chesterton) & Jemma Powell (Barbara Wright). Also featuring James Dreyfus as the Master… the Original you might say! 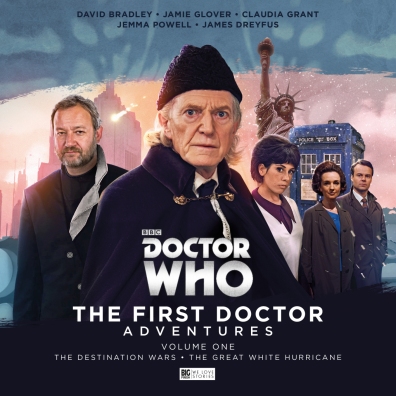 This is a really natural idea. The returning new version of the first Tardis crew are perhaps even better than before having lived with doing these voices before. It’s not an impression & occasionally the RP feels just a touch forced, but it’s a damn good version. I mean they have to sound natural whilst doing a version of someone playing someone else. With so many layers it really is a wonderful job. Each actor finding a part of the original actor to hang their performance off. I can only say they should give them lots more practice to be even better (as a thinly-veiled excuse to hear more of this!)

The first story is The Destination Wars by Matt Fitton. 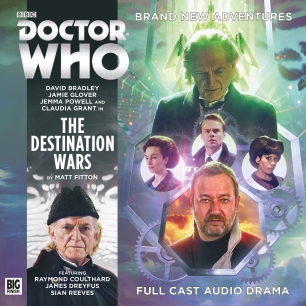 It’s told in a really classic 4-episode format for Doctor Who & like the other story in this set it captures the feeling & style of story telling of the first Doctor really well. And it’s a Master story!! I must admit I only knew James Dreyfus from doing a few more camp comedy roles such as in My Hero & Gimme, Gimme, Gimme. So I was looking forward to hearing him in a different light. I wasn’t disappointed. He is a perfect Master. This feels like how the Master would have been portrayed back then. He is slightly more deliberate in his hypnotic suggestion. It takes him a while to cast his thrall and this plays really well. In story telling terms it even makes sense that at this stage he was still honing the evil that he would later so easily use on people. The relationship between him & the Doctor & Susan is closer to looking to times when they were on Gallifrey and gives you the feeling of a first off home-world encounter. Ian & Barbara are also very well served in this story, but I find myself captured by the Timelord’s especially in this one.

The Great White Hurricane by Guy Adams is our second story and is somewhat of a different beast. Whereas the last story was more a sci-fi tale, this covers the side of the First Doctor’s run where he took on a purely historical tale where the Tardis dwellers are really just trying to get out of histories way & get back to their travels. 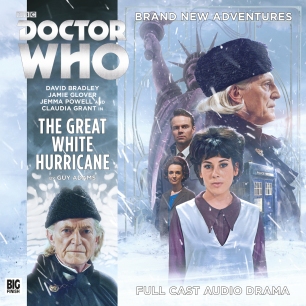 This really feels like with maybe a few small tweaks this could fit right in to the original run. It deals with the gangs of New York and the great hurricane the city had to live through. It’s a really nice setting and an event I knew nothing of but felt by the end I should have; Exactly what those original stories did at their best. This time Ian & Barbara’s story took my interest as much if not more the Susan & the Doctor; Separated as 2 duos are in this story. The guest cast are awesome and it feels like a rounded world. Big Finish always cast well, including with accents, but this time it seems most of the cast playing American are from America, or of American decent and I feel this lends an extra air of authenticity. I might have put this story first, only because the Master against the First Doctor is such a draw any story might be playing catch up to it, but this one comes damn close through brilliant writing and direction. Speaking of Direction, Nicholas Briggs does a great job in both of these stories and captures the spirit and energy of the First Doctor whilst still giving us something that seems new and vibrant.

This really is all you want in a First Doctor set. I not only look forward to more Big Finish sets but I also think stories like this would make a great special TV movie (maybe for the 55th anniversary?); we can but hope! Either way you need to buy this box set!

You can get it on download or CD here https://www.bigfinish.com/releases/v/the-first-doctor-adventures-volume-01-1692