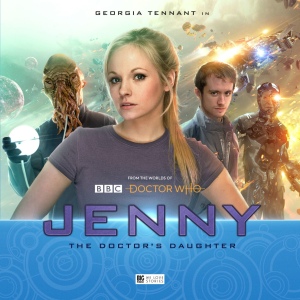 Although (just in my opinion) the Doctors Daughter wasn’t the greatest episode of Doctor Who, the character did interest me and a lot of fans alike. I remember at the time there being calls for more from this character either in Doctor Who or in a spin off series. Well, now we are lucky that when such an opportunity is missed by the BBC it’s not by Big Finish.

As we pick up with our favourite Timelord’s progeny Jenny (Georgina Tennant), she is manning a vehicle she’s might not fully know how to drive; which is when an accident happens. But is the accident as ‘accidental’ as first thought? Soon Jenny is caught up in scams, con men and someone in a very familiar boat to her she calls Noah (Sean Biggerstaff). 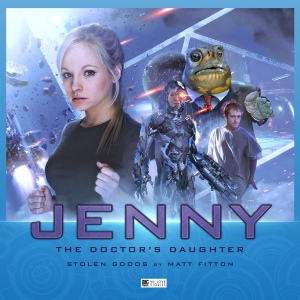 Right off the bat you see the way they are taking the titular character. She is funny, fast talking and seemingly in many ways much like a female version of the Doctor. Fitton gives us a plot that allows her to face moral quandaries that get to show us she is on the right side of them and this is a fun episode to highlight what to expect from our new hero. It also give her a ‘companion’ in Noah who is perfectly suited to work alongside her in the stories to come.

Prisoner of the Ood by John Dorney

Jenny finds herself in a suburban neighbourhood in modern-day England with a few holes in her memory. When people start turning into a less than friendly version of the Ood, she must remember what happened and what she did with Noah before she can save the day. 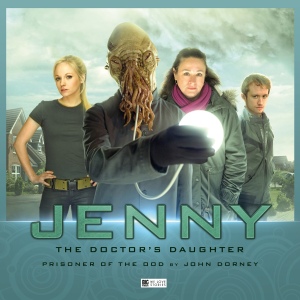 Dorney does a wonderful job of finding the sinister in the everyday and even mundanity of modern suburbia and even gets a cameo as a disgruntled writer (which we are sure isn’t self-based!). We get a perfect guest turn from the ever entertaining Arabella Weir, no stranger to the Big Finish world too. The idea of challenging how much Jenny might have done to get out of a tricky situation also comes up, when she isn’t sure if she left her companion behind. As director Barnaby Edwards say’s in the extra’s, this is the kind of thing you can only really tease the audience with when a character is so unexplored and wouldn’t have the same questions a few boxsets in. Also a real pleasure to here Silas Carson back as the voice of the Ood.

Whereas Jenny is celebrating having travelled in space and time via her new Vortex manipulator, Noah isn’t as happy. They are on a strange planet and although Noah seems to know a lot of advanced science about their surrounding given his lack of memory about himself, the exact location isn’t something he knows.

When they do work out their location they find Kamshassa has an oppressed people where the men are addicted by the state to a drug known as ‘Chup’ but must be ‘revered and provided’ for by the woman who go out to earn a little money to feed their addiction. All of this under the ever watchful gaze of the ‘Dragon Lord’. But how did this broken society end up like this and what is the real truth behind the Dragon Lord?

This has a nice eastern flavour to it and for a female-led set highlights inequality among men and woman in an allegory that is in keeping with the best traditions of science fiction. The conclusion is satisfying but one I would not wish to spoil. Brassington’s script is also nicely told to feature a strong female guest staring lead from Arina Il as Shoon-Wei.

When Jenny and Noah find themselves in Zero Space, which is literally nowhere, they manage to find a space station manned exclusively by clones of Dreyda (Adele Anderson) and Cal (Anthony Calf). They are clones of 2 scientists who set up the station with the modest ambition of finding the answers to all scientific questions ever asked by mankind. But when COLT-5000 (Sian Phillips) follows our heroes onto the station and capture Jenny and Noah, the clones feel compelled to help ‘COLT’ even though they don’t seem to want to and Jenny has no idea why; but better find out before it’s too late.

Terrific guest stars around the board on this one. Phillips is perfect as COLT and Anderson and Calf but in a real tour de force as so many versions of the same person struggling with a conflict you only truly understand at the end. We also reach a really good and satisfying end to the boxset, the very end of which is a guaranteed fan pleaser.

This is perhaps the best look at what a female Doctor could be. At times shades of Tom Baker and David Tennant come through in the humour by Georgia Tennant (I wonder if she found time to catch up with David at all? 😉 ) and the writers. It was lovely to hear that Georgia herself helped shape the writing and was involved in the shaping of the character outside of her performance which is also great.

But it’s not just a copy of Doctor Who as a woman. We get to see shades of her soldier roots which were also given to her when she was cloned and how she had to keep that side of her in check to be the Timelord she seems to more aspire to be. Top marks also to Biggerstaff as the memory challenged Noah. A nice way for Jenny to see her journey from a clone with no identity to who she has become through the eyes of someone else who struggles with their identity. The writing is great as is the direction of the piece. I for one hope the BBC have gone a similar route with giving us a first female Doctor who is just as funny, empowering and exciting to follow. 9/10

You can order on CD or download here: https://www.bigfinish.com/releases/v/jenny—the-doctor-s-daughter-1701

One thought on “Review: Jenny – The Doctor’s Daughter”