When is the Doctor not the Doctor? When he is the meta crisis Doctor Donna! I know, the old ones are the best!! 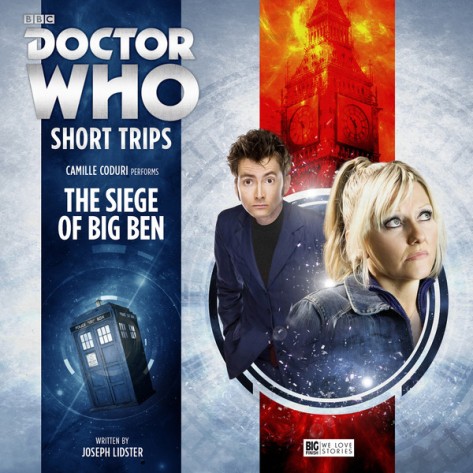 This short trip (narrated by Camille Coduri) sees Jackie Tyler recounting to a friend about her life in the other universe with this new version of the 10th Doctor. How her life has changed and how a recent “siege of Big Ben” (as the name would suggest) has left her questioning what this version of the Doctor is about and how much can she and her family trust him.

For a start Coduri is as always tour de force as Jackie Tyler. Her ability to talk a thousand words a minute and still be engaging and easy to follow is something to behold, which is also a credit to director Lisa Bowerman. The idea of following the story on of who the meta crisis Doctor is, is a wonderful one. He’s undoubtedly brilliant but does he have the moral centre of the Doctor being a blend of two people? Did he take the best of the Doctor and Donna or is he a multiplication of each of their worst sides? This audio starts to answer some of those questions. It’s also an inspired idea to think that only when the Doctor stops being like the Doctor does Jackie seem to realise how much she likes him. If he was being like the normal Doctor you couldn’t imagine her being so nice to him.

It’s also a nice frame-work of a siege that keeps the story moving along nicely but without too much to set up in a short trip. If anything I was left wanting a longer story from writer Joseph Lidster but I think this is clearly setting up at least one more adventure to come.

Buy this adventure now on CD or download here https://www.bigfinish.com/releases/v/the-siege-of-big-ben-1558

One thought on “Review: Short Trips – The Siege of Big Ben”