Class is back. This time in audio form courtesy of the good folks at Big Finish.

All the gang is back, even though in this case in different groupings. Some which we haven’t seen together as often which is really exciting. I always felt Class had so much potential in its original TV run. I enjoyed the one series it got and knew if it had a second series it would work out a few kinks and become the show it could be. In fact when I interviewed Greg Austin he mentioned a few ideas they had to shape up a second series. Where as these first two sets from Big Finish are set during the first series. Do they create the feel of the TV show whilst still delivering a few tweaks to make it even better? Well, let’s look at the stories…

Gifted by Roy Gill introduces us to Thomas (Rhys Isaac-Jones). A young man with real potential. Lucky for him he meets Mab (Deirdre Mullins) A lady that knows just how to bring out his potential, but at what cost? And what about when she offers to bring out the potential in Ram (Fady Elsayed) on the football field? Meanwhile April (Sophie Hopkins) meets Thomas and finds out the truth behind Mab’s promises.

A really strong opener, sensibly starting us off with a pairing we are more used to before going into some different groupings of the cast. You get right into the sweet, but sometimes awkward new relationship between Ram and April. Having the story start with Thomas it gives us a good opening to re-meet the stars of the show. Mabs being a creature that works from potential taps nicely into Rams worries about being able to still play football with this artificial leg and speaks to that fear a lot of us get when we are young and first realise it’s possible not to make it; even if you are good at something. Gill’s script also gives a great feel of the sinister world of Mab. Great performances from our two guest players.

Life Experience by Jenny T Colgan see’s Ram and Tanya (Vivian Oparah) on work experience at Sevelin Laboratories. Tanya can’t wait to get into the scientific research and share her ideas with the scientific elite… Ram wants lunch. But both get more than they expect when a living experiment is let loose in the lab.

Colgan is always a great writer and here she take a classic Sci Fi idea of an experiment gone wrong that’s set loose and puts a nice spin on it. This is a great showcase to reintroduce Tanya and Vivian Oparah hasn’t lost a beat in the performance and is nicely matched with the “couldn’t give a stuff about science” Ram. Giving Fady Elsayed some really nice comedy moments along with the drama. Great supporting cast which gives the returning cast good stuff to play off.

Tell Me You Love Me by Scott Handcock rounds up volume 1 in rare style. Charlie (Greg Austin) and Matteusz Andrzejewski (Jordan Renzo) are just getting used to their new found love, but Charlie is struggling with giving in to it as much as Matteusz. They need to talk. The only problem comes when they can’t stop talking, literally. Suddenly their personal problems could become deadly and when Quill (Katherine Kelly) gets stuck in the mix the three end up in a race against the clock to all shut up!

This is such an imaginative and economical story. The action takes place with our core 3 cast alone (aside from a brief guest turn at the end). Each in turn talking non stop, with some really nice techniques of them talking over each other where needed. It’s a real actors story by Handcock. The relationships between Charlie & Matteusz and Charlie & Quill are perfectly exemplified here, each with their share of tensions and things needing working out. Events forcing them to face things they would usually avoid. To create something so tense with so few elements is a gift. 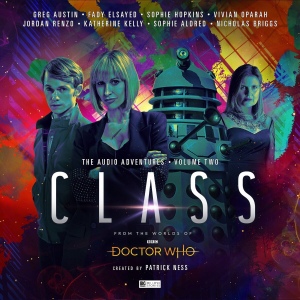 The second set starts with Everybody Loves Reagan by Tim Foley. April is trying to create a new “buddy group” at Coal Hill, but no one is biting. Just as she’s packing up new student Reagan (Taj Atwal) comes along praising her great idea and lending an ear. However when Reagan gets friendly with everyone else April feels a little pushed out. Ram & Tanya thinks she’s being jealous. After all, they’ve known Reagan for years… haven’t they?

Another story that taps into feelings we all get at times at college. Is the new person more popular than us? Do our friends want to really be our friends.. basically, are we enough or is someone else better? Props to Atwal as Reagan who rides the line between being everyone’s friend and an impending sense of menace below the surface, which helps that it’s so well written that way by Foley. Hopkins as April shows why this character is the heart of the Class team; even when she doesn’t always get the love back.

Now You Know… by Tim Leng

In classic Class style from the TV show, people are being savagely attacked in mysterious circumstances. Tanya and Matteusz find themselves investigating and uncover a mystery that goes back decades.

This was a tough listen for me… not in a bad way. It deals with bullying and being an outcast, something I along with so many others experienced at school. It’s so well told as to bring the feeling right back, but with a positive light put on it with friends sticking together. I never would have thought of putting Tanya and Matteusz together, but as a gay immigrant and a young genius student, who as a black young woman will have seen her share of discrimination, these two are the perfect pair to face bullying and to stick by each other to help each other through in a way I only wish I had experienced bullying. Something quite cathartic in this for me. I’m sure if you haven’t experienced bullying you can still enjoy the story as is, but if you have I think you’ll experience this on the level I have. I really hope the youth of today do stick together like this.

I’ve enjoyed all the stories in these 2 sets, but this is what you want from the final tale. Sophie Aldred doesn’t miss a beat coming into this new side of the Whonivese. The interaction between her and Katherine Kelly as Quill is electric. Ace talking of what the Doctor did to change her life and Quill facing this with cynicism. Usually you know the former companion would win round the disenfranchised but given Quills actions are not in her own hands it’s not so straight forward which gives this dynamic a new level.

Charlie being lost on his own in the past also gives the character a chance to stretch out on his own and face challenges his otherwise might not rise to meet. All this and who doesn’t love Nick Briggs as a Dalek?

Scott Handcock as director along with an awesome set of writers and actors has taken the the mantle of Patrick Ness’s creation and expanded it in a way they never got a chance to on TV. Most shows need a second series to work out the kinks and find the real direction it needs to go in and these days it’s hard to be given the time to have that chance. I think it’s sensible to start off within the first series and work with the world we are familiar with.

However if these boxsets are successful (as they deserve to be) then I hope we will see in effect a “series 2” to TV Class in audio form in the way that Torchwood has recently had continuing adventures with “Aliens Among Us”. If nothing else as the cast gets older it might be hard to sound between 14 and 17 forever.

I like the different configurations of members of the cast together; getting to expand what the show can be, again as I’m sure they would have on TV given time. I would like to see in the future a complete Class reunion as it were, but it’s understandable this isn’t always possible with schedules and it’s nice when you do this to really get everyone together.

I had only a small concern after the unconventional way Class was realised, with Big Finish also choosing to do something different with the release method. Where the TV version was released online first and then really late night on TV, being released much later in the US pretty much encouraging piracy, I believe this contributed to soft numbers of viewers. Big Finish has released both sets on the same day. I’m sure this is a calculated idea, but I wouldn’t want sales to be less as a result of asking people to buy 2 new products at once. That being said the stories are so good as to encourage the second purchase, if not bought at the same time.

If you were a fan of Class before, I think you’ll enjoy what they have done in this world. If you weren’t, please give it a go again and hear what they have done to flesh out the world. Where as Doctor Who is great at using Alien parallels to show what’s going on with our own society, Class has taken what goes on for a lot of us at school / college and used other-worldly experiences to make them as large as they feel. 10/10.

Buy both sets today on CD or Download here https://www.bigfinish.com/ranges/released/class