Created by Gerry and Sylvia Anderson in the mid-70s and running for two Space: 1999 told the story of Moonbase Alpha and its three hundred and eleven crewmembers, stranded on the Moon after it broke orbit from the Earth on the fateful date of September 13th. Lovingly reshaped into an audio drama, but keeping true to the spirit of the original, Big Finish have recreated the pilot episode as a launchpad for a new series. 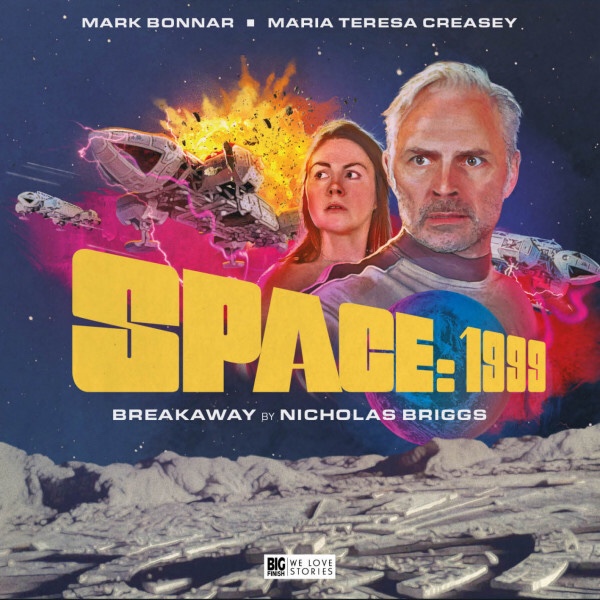 As distinct from many of their other projects, this is not a continuation of the television show but a re-telling of the story with a fresh cast – similar in manner to their version of ‘The Prisoner’ follows the same essential beats of the original, with Commander John Koenig taking command of Moonbase Alpha in the run up to a high-profile space mission. As well as a staging point for the Interplanetary Meta Probe launch, the Moon also houses a nuclear waste dump which may be responsible for a spate of mysterious deaths, news of which is currently being.

There is a lot of backstory built into the early scenes of this drama, but it is cleverly facilitated through news media and an interview which helps to cement the setting. We also learn about Alpha through our introduction to Dr Russell and her run-ins with the outgoing base commander Gorsky, before further character introductions facilitated through Koenig’s arrival. As well as beefing up the world building, the script gives greater time to character interaction; Koenig gains a history with Alpha, as its former commander, and his arrival itself is dramatically woven into the plot when his pilot succumbs to the mysterious space illness. Elements of conspiracy and a countdown aspect are also added, as tension is built each time the computer notes the move into ‘daylight cycle’ for a new day, inching towards September 13th.

The in-story scientific explanation for the Moon’s breakaway is beefed up substantially too, addressing the long-standing question of why it does not vaporise or break up, rather than escaping Earth’s orbit. The new reasons are doubtless as gloriously improbable as ever, but they have solid internal sci-fi logic (and I think I would gladly believe whatever Victor Bergman suggested anyway!) Interestingly, the Extras reveal that Script Editor Jamie Anderson consulted with scientists to get the science and the speculative aspects in good order.

Mark Bonnar (Catastrophe, Humans) has played a number of quirky parts for Big Finish, most notably the multiplicitous Time Lord villain ‘The Eleven’, but this is his first heroic leading man role for them. While Martin Landau’s original was contemplative at times, this square-jawed John Koenig blazes with righteous indignation and is carried through the story by sheer determination. The transformation of Dr Russell is even more marked: where Barbara Bain was restrained and prone to thoughtful middle-distance gazes, Maria Teresa Creasey’s chief medic is indignant and combative. She locks horns with authority figures fearlessly; remaining uncompromising and relentlessly sarcastic throughout, often to the point of unlikability.

It is a terrific performance and the interplay between this Koenig and Russell promises much for the future. Clive Hayward’s Professor Victor Bergman, the senior scientist and a calming influence on the pair, who comes across as a genuine enthusiast, while Timothy Bentinck offers a far more interesting and bombastic character as Koenig’s boss, the duplicitous Commissioner Simmons. In the wider story Glen McCready is excellent in the triple roles of Commander Gorsky, Paul Morrow and Alan Carter, a feat I did not realise until hearing the credits. One notable change to the character line-up is a gender swap, with the character of computer expert David Kano becoming Dashka (Amaka Okafor) in an effort to balance out the crew. Interestingly, while Kano was not actually featured in the television episode of ‘Breakaway’, he was a regular throughout the first series and the introduction of the character here makes lots of sense.

As ever, the sound design work here is excellent, and Iain Meadows has included much of the original’s signature sounds into his immersive soundscape. Evoking Barry Gray, with an entertaining, upbeat reworking of the series one theme, Benji Clifford’s score is top notch too.

This is a superb relaunch for the series which feels more like an audio movie, or indeed a feature-length pilot. To quote the Tin Dog Podcast, this version of Space: 1999 is “set in the distant future of twenty years ago”, it retains beloved period detail, but at the same time ramps up the character dynamics and dramatic tensions to provide a more mature, contemporary twist. I look forward to the first boxset of regular episodes, promised in early 2020. As part of the promotional material, if you are on the fence, there is an entertaining behind the scenes feature to whet your appetite.

Order from Amazon
Check out our Audio Drama reviews!