American Horror Story 100th episode airs tonight in the US & tomorrow in the UK.

To celebrate AHS’s landmark we are taking a look back at our favourite characters both past and present. 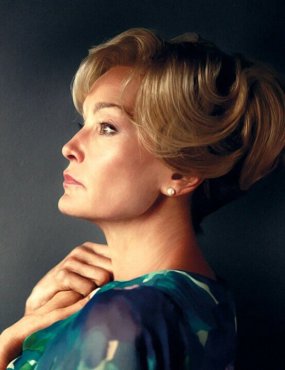 Constance was a fierce and ruthless matriarch who made her presence in the damned house well-known.

Lange returned as Constance in the eighth season, Apocalypse and practically broke the internet when it was announced.

Sarah Paulson’s was the ultimate heroine of season two’s Asylum.

A journalist who goes undercover and is forcibly admitted to Briarcliff Manor.

Whilst in the asylum, Lana is subjected to unspeakable horrors such as a barbaric form of aversion therapy inflicted by Sister Jude (Jessica Lange) and the murderous depraved advances of Bloody Face (Zachary Quinto).

She returns in the sixth season, Roanoke.

For her performance in Asylum, Paulson won the Critics’ Choice Television Award for Best Supporting Actress in a Movie/Miniseries.

Pepper is microcephalic and one of the inmates at Briarcliff Asylum, who is the first to appear in multiple seasons of the series.

As revealed in the show’s fourth season, Freak Show, Pepper was placed in an orphanage by her older sister before she was found by Elsa Mars (Jessica Lange). Pepper is made into the first performer in Elsa’s sideshow.

In our interview with Naomi, when asked ‘Did you ever expect Pepper would become such an iconic character in the show?’ she answered:

“Never. When I was first cast, I assumed I was just one of an army of pinheads! I mean, why would a show, particularly one with such big name-talent, endow such a juicy character upon an itty bitty nobody like me? But, it also made sense… You pay a premium for those big names; in which case, you want to see their faces! Finding an extreme character actress with an improv background was actually a stroke of genius.”

Check out the rest of the interview here! 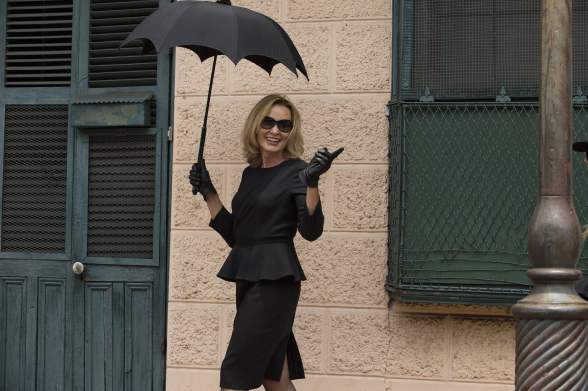 Fiona Goode is the Supreme witch of her generation and the leader of the Salem witch descendants. She lives a glamorous life of luxury in Los Angeles. She returns to Miss Robichaux’s Academy after the murder of Misty Day (Lily Rabe) with the intention of teaching the young witches to fight, and reconciling with her estranged daughter Cordelia (Sarah Paulson).

Fiona is a beautiful, graceful, intelligent, witty and charismatic woman, though exceedingly vain, particularly when it comes to ageing. She has moments of extreme kindness, for instance, using her power to resurrect a baby that died at birth, but she is also ruthless, exhibiting no guilt over murder. As a powerful witch, she fears no one and wants to live forever. She also finds amusement in taunting and belittling others.

Lange’s portrayal of Goode can be perfectly described as sweetness, spice and a lot of shady comments such as;

“You know, I’ve gotta hand it to you. A bus flip? That’s not easy. But you were sloppy, little witch bitch”.

For her performance, Lange won the Dorian Award for Best TV Performance of the Year – Actress and the Primetime Emmy Award for Outstanding Lead Actress in a Miniseries or a Movie. 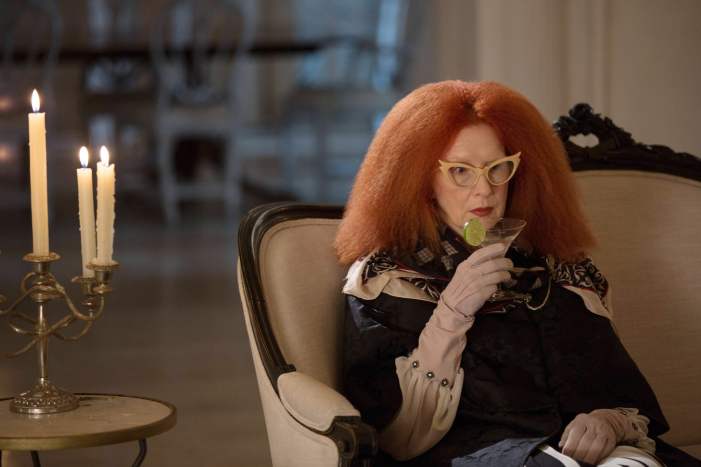 Myrtle Snow is the eccentric head of the Witches’ Council with shocking orange hair. Though she adores Fiona’s daughter Cordelia as her own, Myrtle holds a lifelong grudge against Fiona, whom she (correctly) believes murdered the previous Supreme while the two were together at school, and makes frequent attempts to denounce or overthrow her.

Conroy brings the character and her many quirks to life in this amazing portrayal that left us all shouting “Balenciagaaa” !!!!

Following her second resurrection when the Coven (and the rest of the world) was threatened by the Antichrist, Myrtle was instrumental to his downfall.

For her performance in Coven, Conroy was nominated for the Primetime Emmy Award for Outstanding Supporting Actress in a Miniseries or a Movie. 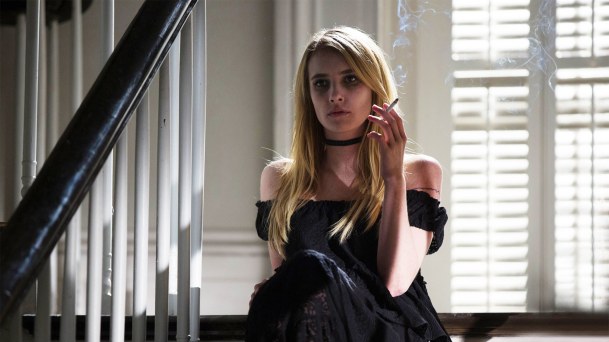 Madison Montgomery is a young Hollywood star who makes $7million a picture. She finds out that she is a witch after using her unknown Telekinesis to murder her film director, who annoyed and mistreated her. She had been in and out of rehab for many years and was the sole support of her parasitic family from a very young age.

After being drugged and gang raped by the frat boys who film the event, Madison uses her power to flip the frat boy bus in revenge – setting her on a destructive path that sets her against half the cast!

Madison meets her demise in Coven but is thankful brought back in Apocalypse – where it is revealed that after her death, she was sent to her own personal hell of processing endless returns and complaints from a never-ending line of customers at a department store.

As somebody who has worked in retail this speaks to me on a very personal level !

Roberts portrayed of Madison the cold-hearted bitch with a superior fashion sense has been described as having “some of the most memorable one-liners in television history”.

Lets hope in the words of Madison:

Liz Taylor is the eccentric, transgender bartender of the Blue Parrot Lounge at the Hotel Cortez and long-time employee of the hotel.

Formerly known as Nick Pryor, Liz worked as a medical representative up until 1984, and was in an unhappy marriage to a woman with two kids, toward whom she displayed no affection.

While on a business trip in Los Angeles, she meets The Countess in her hotel room while dressing up in her wife’s clothes. The Countess does her make-up in a style similar to her namesake, Elizabeth Taylor, and dubs her Liz Taylor.

The series finale “Be Our Guest” provide viewers with the most emotional, poignant moment of the season – thanks to O’Hare and his amazing layered character.

‘The Countess is the enigmatic, bloodsucking, malevolent owner of the Hotel Cortez and resides in the blood soaked penthouse’

The Countess (portrayed by Lady Gaga), is the enigmatic, bloodsucking, malevolent owner of the Hotel Cortez and resides in the penthouse.

Born Elizabeth Johnson in 1904, she was an actress who was featured in a Rudolph Valentino movie and later invited to dinner at his house. That night, she met his wife Natacha Rambova who indicates that their divorce was just a publicity stunt. She then engages in a secret love triangle with Rudolph and Natacha. While attending a cocktail party celebrating the opening of the Hotel Cortez, she heard about Valentino’s death in New York and planned to commit suicide by jumping out a window.

She is saved by villainous James Patrick March whom she later marries, but doesn’t profess to love. Even during her marriage, she frequently disguises herself and visits Valentino’s coffin, leaving a single red rose each time. On one such visit, she finds Valentino and his wife alive, and they state that they are infected with a blood virus that saved them from death. They then turn Elizabeth so she can spend eternity with her true loves while her disappointed husband watches from afar.

This sets in motion The Countesses bloody reign over the Hotel Cortez and all whom reside there.

Lady Gaga’s arrival in American Horror Story was a welcome addition that soothed the absence of fan-favorite Jessica Lange.

Gaga proved herself as a capable and credible actress, for her performance, Gaga won the Golden Globe Award for Best Actress – Miniseries or Television Film.

Kai Anderson is a cult leader from a Michigan suburb. Before he was radicalised by personal trauma, he was a typical internet troll who hadn’t realised yet the power in manipulating emotions.

Following a horrific ordeal with Pastor Charles and undergoing ‘therapy’ , Kai pretends to be a Trump supporter as he saw the man’s presidency will provide him with the opportunity. Kai became a manipulative and disturbed cult figure who intends to gain control over others using their fear and rage.

His following was known as FIT, which grew as he kept reeling in new recruits with his gifted charisma. What Kai started as a small group of locals had metastasised as he got more prolific in the media and in politics. He was hellbent on spreading chaos to take over the world, only to have his ego be his ultimate undoing.

His harassment towards ethnic minorities and the LGBTQ community are incisive elements for him being perceived as a racist and homophobe, although it is not entirely clear whether he is actually biased against them, or just exploits pre-existing prejudices and tensions to create chaos in the surrounding environment. He is, however, openly misogynistic, viewing women as inferior to men, and holds the belief that they are incapable of holding places of power and importance in society. Despite this, he has displayed a sexual interest in both males and females, though it is unclear if he is actually attracted to them or just uses sexual orientations as a means to further entrance others into following his deranged viewpoints.

As this season focused on the aftermath of the 2016 U.S. presidential election Kai’s character and his cult showed an interesting viewpoint into what could become Trump’s American Dream!

From the current season 1984, Margaret Booth is the sole survivor of Mr. Jinglesʼs massacre and the current director of Camp Redwood.

During the incident in 1970, she described herself “leaving her body” as Benjamin Richter, aka Mr. Jingles gashes out her ear. The massacre had since shifted Margaret’s view in a religious direction and she openly rebukes the “sinful” actions by the counsellors.

Grossman recently describe the character as “unhinged” this is certainly true!

Thats why I love the character from the looks she gives the counsellors to her one lines – Margaret is one of if not the reason I am loving 1984.

Who is your favourite character from AHS ? Let us know in the comments box