The Lost Stories range from Big Finish Productions had a four series run from 2009-2013, making a range of stories entirely out of television stories which for one reason or another never made it to the series. The range ended due to the amount of viable scripts drying up; with remaining stories being from creators who would not allow Big Finish to adapt them for one reason or another or stories which weren’t far enough along in development to facilitate a full adaptation. This year Big Finish have given the range a brief revival with two stories from the 1980s not produced during the original run for the former reason, featuring two distinct Doctors and two distinct feels to their stories.

The first release is Nightmare Country written by Stephen Gallagher and originally submitted for Season 21, as such it features the Fifth Doctor, Tegan, and Turlough. What really grabs you about Nightmare Country is that as a story it could never have been done on television at the time with the budget Doctor Who had. Gallagher wrote two stories which made it to television, Warriors’ Gate and Terminus, both stories which Gallagher has noted disappointment in how they were realised. Both were high concept science fiction stories which were let down by poor realisation; the former generally being mixed in fandom while the later is patently in the negative category. Nightmare Country is a fairly high concept science fiction piece dealing with the Doctor giving away his memory in a deal with some aliens and being trapped in an alternate reality. There’s also some stuff built upon the nature of dying and what cloning in science fiction almost always means. The story takes some time to find its footing, throwing the listener right into things which can be slightly disorientating, something I believe Gallagher intended when writing this story. The first episode largely builds up the scenario and atmosphere to draw the listener into the story. Once the story gets going, the listener will notice that Nightmare Country is actually quite short for a Big Finish audio. This is not a complaint on the story, however, as it knows just how much time it should be taking with the four episodes, ending the story leaving you wanting more.

One interesting note throughout Nightmare Country is that unlike Gallagher’s other stories, there is an undercurrent of humour throughout the proceedings. This is not to say that the story is a comedy, but there is a wit and charm to proceedings especially between Tegan and Turlough. Janet Fielding and Mark Strickson are excellent in their roles and play off one another incredibly well. Unlike many of his television stories, Turlough is given a large thread during the story actually giving him something more to do than just stuffing him in a ventilation shaft throughout. Tegan also has some excellent scenes with the Doctor where Gallagher almost reflects on what made Tegan leave in Resurrection of the Daleks and Peter Davison plays the Doctor throughout in this uncertain manner. Overall, the issues of this story are mainly due to a weaker supporting cast which could have been used to flesh out the world, and quite a bit of the nightmarish imagery comes across as tame by comparison to some of the stuff Doctor Who has done before and since. 7/10. 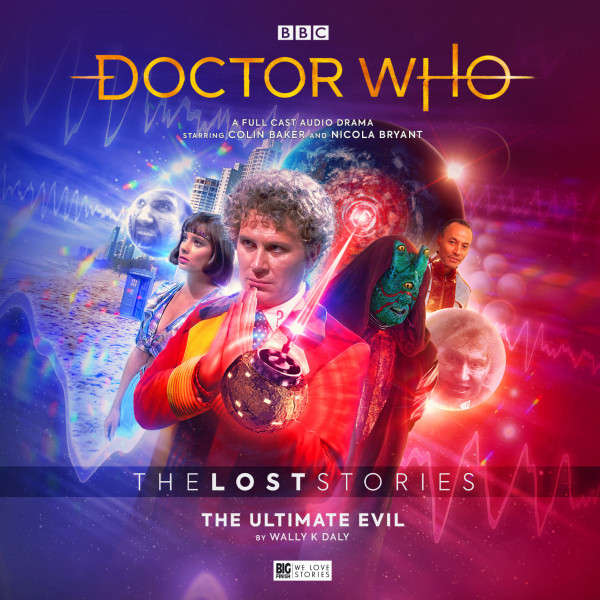 The Ultimate Evil is the other Lost Story included in the revival, and has been the one that got away for Big Finish. Originally meant to be the second story of the original Season 23 which was essentially adapted into the first series of the Lost Stories, it wasn’t included due to author Wally K. Daly recording an audiobook version for the RNIB. The Ultimate Evil concerns the Sixth Doctor and Peri arriving on the continent of Tranquela for a holiday as the TARDIS has been fully repaired. Tranquela is a peaceful planet but all is not well: a hate ray is turning the peaceful inhabitants into murderers and a warmonger; the evil Mordant, is attempting to put both continents on this planet into eternal war. This story has always been the black sheep of the original Season 23, being a standard slice of Doctor Who that doesn’t really do much new with the format. Big Finish’s adaptation, done by Daly over thirty years from initial drafting, does a lot to change the original pitch. Mordant is no longer called the Evil Dwarf Mordant, and there are definite changes in dialling back the harsher nature of the Sixth Doctor. Colin Baker can still give a performance as the brash version of the Sixth Doctor, but this version of the story still has his relationship with Peri maintain an almost playful banter. They argue, and there are the Bakerisms that we all know and love, but clearly they are friends who care about one another. It makes a great contrast when the hate-ray is turned upon the Doctor and Baker has let loose his over the top performance which is excellent. Nicola Bryant’s performance throughout this audio on the other hand feels slightly out of place. Bryant is tasked with playing two characters, one who looks like Peri and dies about halfway through the first episode. As the character, Bryant portrays her as incredibly bored and a one dimensional character only meant to be a love interest to another character. The first episode also is where a majority of this story’s problems arise. Like the stories from Season 22, The Ultimate Evil is presented as two 50 minute episodes and the first episode feels like a 25 minute episode stretched out to 50 minutes. The Doctor and Peri don’t arrive on Tranquela until late in the first episode and Mordant as the main villain is mainly in the background until Part Two. Robin Sebastian is incredibly enjoyable as Mordant, making his voice and presence as incredibly different from Sil as on paper the characters are incredibly similar. Sebastian goes over the top with the character making a memorable performance which hammers home the message of the story. This is one of capitalism leading to war and the general need for giving peace a chance which is incredibly enjoyable. If both episodes were of the same quality this would be a great slice of 1980s Doctor Who, but as it stands it is a decent if heavily flawed story. 6/10.

Overall, the Lost Stories both are interesting looks into what could have been that play around with different ideas. Both casts are great and the stories are interesting enough, but they don’t reach the heights of some of the other points in the range. 6.5/10.

One thought on “Review: Doctor Who Lost Stories – Nightmare Country / The Ultimate Evil”