Bridging the gap between Mother Earth and the latest series, Mars, Big Finish has released a Star Cops audiobook. A thriller which trades on a most precious commodity in space exploration, ‘The Stuff of Life’ looks at some of the implications of colonising the red planet and the infrastructure needed to do so. 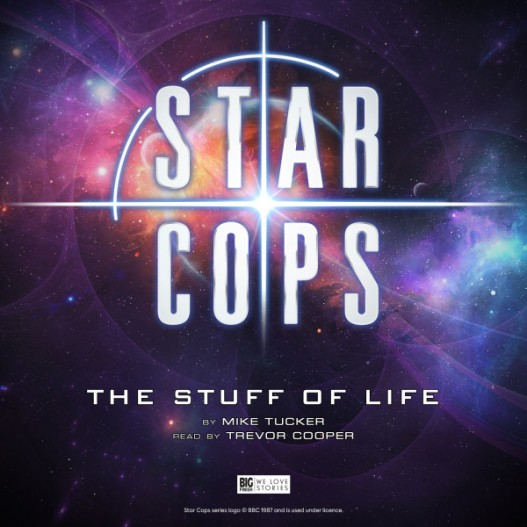 Beginning amid the underwater ruins of Venice, rather than in outer space, the story soon moves to concentrate on the path to Mars. With ISPF Commander Nathan Spring’s focus tuning towards the growing colony, he and the boorish Colin Devis have undertaken the ten-week journey to the final outpost on the Martian journey, the Edgar Rice Burrows space station as a precursor to visiting the Mars itself. If space is the high frontier, Mars is the Wild West in need of a sheriff.

‘The Stuff of Life’ sits neatly between Big Finish’s two audio series, drawing on the implications of the recent terrorist attacks. Writer Mike Tucker develops a double-headed story line, following events with Spring and Devis on the Edgar Rice Burrows, and back home on the Moon, where their fellow officers Pal Kenzy and Priya Basu find themselves investigating a mystery. Eventually there’s a connection between the two, one which spins on cynicism and corporate greed, and it calls for some derring-do courtesy of undercover officer Paul Bailey too.

Mike Tucker is perhaps best known as a visual effects wizard who has worked on both classic and modern Doctor Who, as well as Red Dwarf and a host of movies. He has also written a number of Doctor Who novels and Big Finish audios. His prose shows a great understanding of the Star Cops world, from the naming of space-stations to the insidious influence of big business in space. As well as some compelling big ideas, he also gives a sense of the day to day lives of the characters… and provides a fan-pleasing name check to the characters of Paul (Theroux) and Anna (Shoun) from the television series, in one of Pal Kenzy’s rare reflective moments.

Narrator Trevor Cooper also knows this world well and brings his co-stars’ various accents to life with enthusiasm, flitting from Australian to Indian to Scouse, as well as creating a number of distinct side characters too. Naturally, he shines as the lovably oafish Devis who enjoys a true to character, stubbornly heroic moment towards the story’s conclusion.  The book is rounded out with a brief Q&A session too.

‘The Stuff of Life’ nails the Star Cops tone admirably; for all its science fiction trappings, this is a darned good thriller which fills its more than six hour runtime without feeling hurried. As another solid entry in the expanding Star Cops universe, it is well worth a listen and, I hope, the first of many.

2 thoughts on “Audio Review: Star Cops – The Stuff of Life”