The ninth series of the Fourth Doctor Adventures takes several different directions in terms of structure and tone. Rather than being eight hour-long stories comprised of two parts, the series is now jumping to longer adventures with four two-hour-long stories instead. It also represents a significant time jump moving into the Fourth Doctor’s time in E-Space with Romana, K-9, and Adric rather than during his time with Leela or either of the Romanas individually. It’s an interesting jump considering most of the series are going to shorter formats nowadays but it could yield some intriguing results if done well. 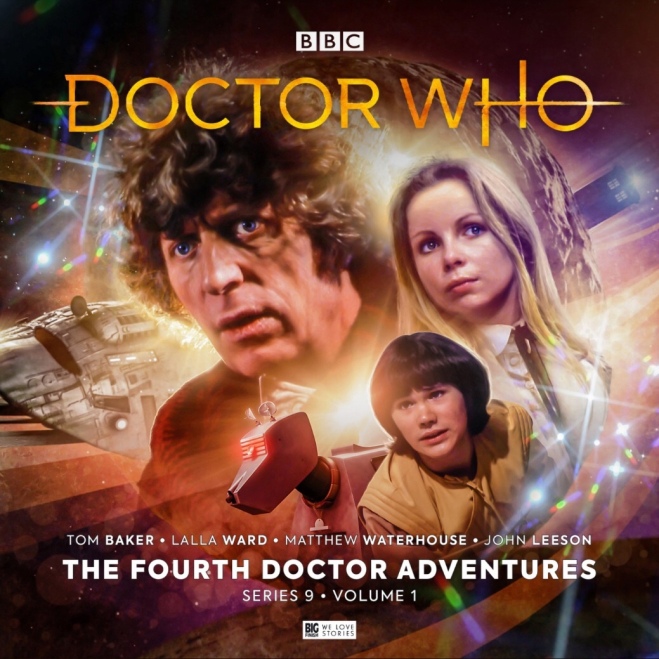 This first story sees the TARDIS team working to escape from E-Space and find their way home. Adric is struggling with his place on the crew as well as grieving over the death of his brother and so wants to leave and find his own way. But as K-9 tracks a transmission coming from outside of the E-Space universe, the group becomes separated on a penal colony asteroid surrounded by clouds of iron oxide and metal strewn all across the landscape. Led by Colonel Aesillor Zyre, this strange consortium of prisoners is struggling to survive, adrift from its normal path and taken over by a dark presence hiding in the rust that slowly devours everything in its path. Welcome to Purgatory, specifically Purgatory 12….. 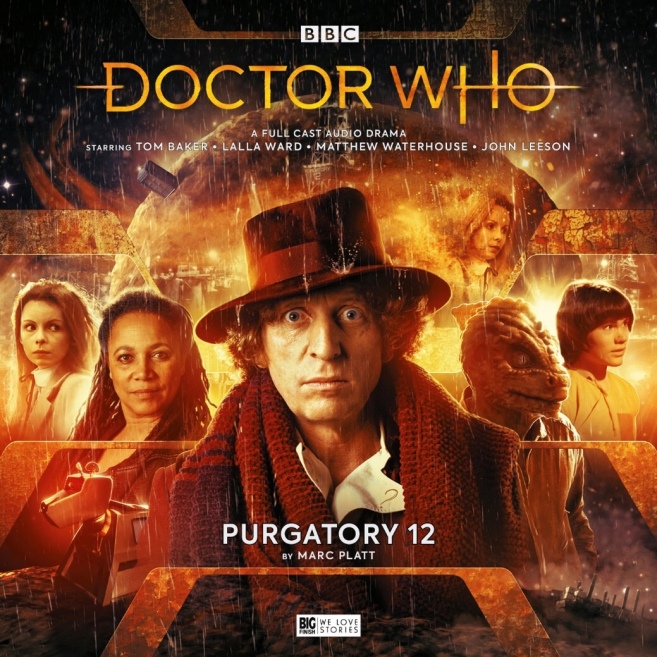 ‘Purgatory 12’ initially starts out a little bit weaker with the soundscape being vague enough that it’s difficult to tell what’s going on at first. But once the team is forced on to the titular asteroid, the narrative rapidly picks up into a hellishly dark adventure. The circumstances surrounding life in this particular penal colony are very ominous and mad and it only grows more and more interesting the farther it goes. There is far more going on than initially meets the eye and Marc Platt’s script takes several opportunities to diverge from what you might expect while still delivering on the premise confidently. There are also several moments that flesh out E-Space a bit more and how beautiful and horrifying it can be compared to our own universe which is a nice touch given how little time and energy was devoted to it on-screen.

What’s most surprising about this story however is how much character development is present across the board. Tom Baker is good as his Doctor with his alien-like demeanour and how he handles relationships playing a big role in how things develop. Lalla Ward is great as usual as Romana II in handling some solo struggles of her own though being turned into the damsel in distress more than once is really not a great look for her. K-9 is struggling with feelings of inadequacy and worry of being sent away which brings some great dialogue out of John Leeson’s performance and some of the side cast is a lot of fun such as the lizard-like Mang and the traditionally heroic ‘man on a quest’ Crimsson whom Romana ends up being paired with for the majority of the runtime. But surprisingly, the standout and the one around most of the story hinges is Matthew Waterhouse as Adric. He’s still acting like an emotional irrational teenager but Big Finish really knows how to use his character exceptionally well to where he becomes if not enjoyable then certainly tolerable. The script puts his character through the wringer; giving him some very difficult struggles and connections to work with and though some of his more annoying characteristics remain intact, it fleshes him out far more than any of the TV stories ever did.

Granted the plot probably drags on a little bit too long all things considered and some of the sound design is on the weak side to where the dialogue is hard to hear in places. It’s also hard to really care at times about some of the bigger emotional moments with one death scene, in particular, coming off a bit forced given we know exactly how things have to play out later in this era. But the extended length does end up benefitting the writing greatly allowing for more drama, character exploration, and details to play out in a way that the previous format often struggled with. It ends up resonating somehow far more than many of the prior stories in the range and it makes ‘Purgatory 12‘ a great start to this newest season of Fourth Doctor fun. With some intriguing ideas, a longer length to allow for more development and energy, a great atmosphere and some very strong performances to balance out its problems, it’s a very welcome addition to canon and one that hopefully foreshadows good things for the rest of the series to come. – 8 / 10

CHASE THE NIGHT BY JONATHAN MORRIS

Tracking a distress signal through the Vortex, the TARDIS team encounters a strange world orbiting a massive star where organic life is present on only one side of the planet. The Doctor feels obliged to respond despite Romana’s suspicions and so they touch down in the middle of a dark and suffocating rainforest full of dangerous wildlife. It isn’t long before they discover the crew of a downed starship that (due to the nature of the planet) is in constant movement to stay in the dark and avoid the crushing and deadly heat of the daylight. They’ve managed to stave off death thus far but time is running out for them with the train’s engine beginning to fail. Caught in the middle of a desperate struggle for survival and with the dark nature of the situation rapidly making itself known, the Doctor, Romana, Adric, and K-9 will have to make some difficult decisions if they want to save themselves from the fire….. 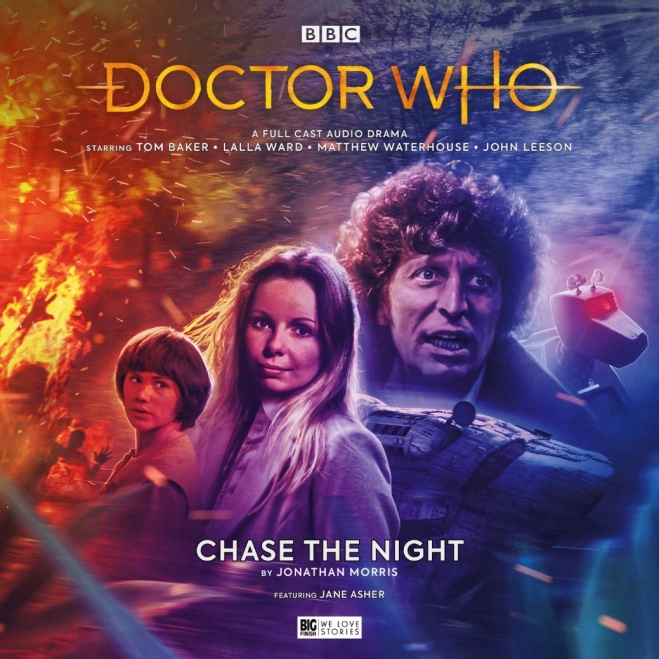 ‘Chase the Night’ is a hard sci-fi story that complements not only it’s sister audio ‘Purgatory 12’ very well but also fits perfectly within the sound and feel of Season 18. The premise is not the most unique in the world but the script by Jonathan Morris is very well-written covering most of its basis in how such a ludicrous concept could work especially with a well-directed soundscape and score. But what makes the adventure work is that it doesn’t dwell on the basis of it’s setting too much, using it as the jumping-off point for a major piece of character drama. This is an adventure full of hard quandaries and forced totalitarian law with a major secret lying in wait to change much of how things go in the final act while still bringing some possession moments that are chilling and terrifying.

The cast, in general, is also very good. While Tom Baker, Matthew Waterhouse, and John Leeson all turn in give great performances, this time most of the focus centers on Lalla Ward’s Romana who gets the majority of the best lines in the adventure as well as a good chunk of the character focus. Her journey in this story is a fantastic one of responsibility and strength and much of her development here feels like a great foreshadowing of her decision to come in ‘Warriors’ Gate’. The stand out however is not in the main cast but in Jane Asher’s performance as the story’s antagonist Pilot Dena. She’s not a usual villain in the sense that she’s evil or malevolent but she’s still misguidedly persistent in doing whatever it takes to survive in a difficult situation, consequences and other lives be damned. Her transition from strained sanity to desperate insanity is hard to hear but very understandable and she’s one of the best side characters Big Finish has delivered in a very long time.

At times, the writing is a bit blunt with it’s morality; with one of the characters outright stating that the situation is greyer than it appears to be. It also loses steam in the second half with its pacing and energy with an ending that’s certainly a surprise but does feel like a bit of a copout. But in general, ‘Chase the Night’ is still a fantastic adventure even coming off a bit better than its predecessor with a more defined soundscape and a more tightly written narrative. The TARDIS team for this installment continues to excel, the longer format does wonders in fleshing out a more developed plot, and the soundscape and direction are as great as Big Finish has ever put out with another great premise being rendered to life exceptionally well. It comes with another strong recommendation and finishes out the first half of one of the Fourth Doctor’s best audio series ever released. – 9 / 10