Helen Goldwyn writing a Doctor Who story set in World War II is an excellent pitch for Big Finish Productions to take up.  Goldwyn has extensive acting and directing experience, being a part of Big Finish Productions since the very beginning with her first work being in The Spectre of Lanyon Moor and The Secret of Cassandra.  Most recently she showed an incredible understanding of wartime as one of four writers on Louise Jameson’s Big Finish Original ATA Girl.  Subterfuge takes place at the tail end of World War II and deals with Winston Churchill’s campaign as leader of the Conservative Party and eventual loss to Clement Attlee, the Labour leader of the time who took the position of Prime Minister.  Ian McNeice returns to the role of Winston Churchill and is brought into conflict with Sylvester McCoy’s Seventh Doctor and Rufus Hound’s Meddling Monk.  Subterfuge juggles two distinct storyline tied into the campaign: first is the Monk’s attempts to get Churchill reelected and the second is a series of terrorist attacks by a group of aliens and spies that the Doctor has to find a solution to while dealing with the Monk’s meddling. 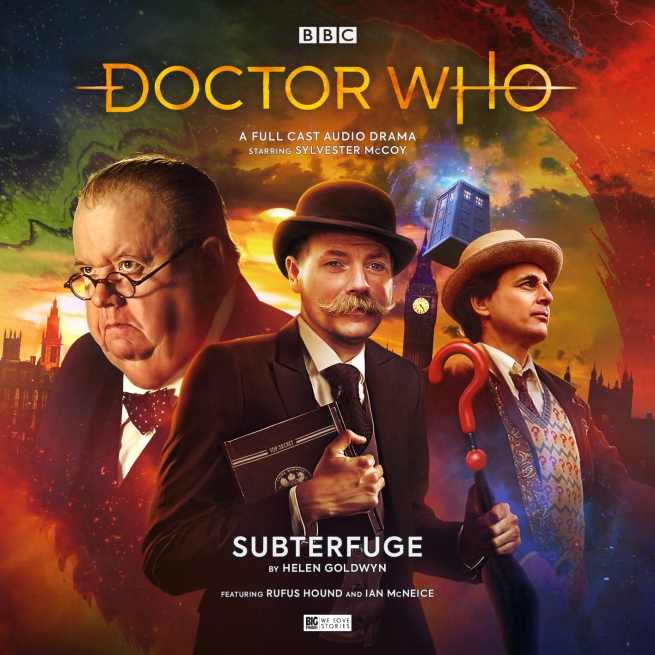 The structure of Subterfuge being split into an A plot and a B plot is perhaps one of the stories slight weaknesses due to certain shortcuts made in the script and the performances to immediately give away certain plot twists and turns.  Specifically, there is a scene early on when a character essentially mentions being a spy for the Germans with only the slightest hint of subtlety and an attempted misdirection at mentioning a triple cross.  Part of this specific issue is down to the performance from Mimi Ndiweni who gives her character of Alicia Dowan an almost immediate sense of guilt with her delivery when the performance should have gone with a cool and calm delivery.  There is also the issue that both plots have enough material to fill a two hour runtime, however, Goldwyn compensates by allowing the more science fiction espionage plot to take the forefront of the Monk’s meddling schemes to change history.  The alien espionage like many good science fiction plots has allegorical links to certain modern events and the conservative governments of today.  Winston Churchill, while not vilified for his Conservative position, is put at odds with Sylvester McCoy’s Doctor at several points during the story.  McCoy has this excellent little monologue mocking Churchill’s policies and conservatism as less necessary in this time of war and a promotion of liberal values.  It is the Doctor who convinces Churchill’s losing line that Labour “would have to fall back on some form of a Gestapo” to implement socialist policies in the UK.

There are essentially three villains in Subterfuge: the Monk, the refugee aliens, and Lesley Kulcade.  Kulcade is the character responsible for bringing aliens to Earth and forcing them into espionage and Brian Capron’s performance is excellent.  Capron gives Kulcade the gravitas for the villain of a political thriller like this story should have and it helps to make the two alien characters more sympathetic as he moves them for his own gains.  The refugees are written as incredibly sympathetic and are only classified as villains due to the acts of terror they perpetrate throughout the story.  The real show stealer here is Rufus Hound, giving his always delightful Meddling Monk another wonderful outing.  The Monk’s plan here is to keep Churchill in power, acting as an advisor and giving the Prime Minister plenty of confidence that he will remain in his position after the election.  The Monk is the one approving Churchill’s speeches and appearances and he actually has to work with the Doctor to keep up the façade of just being there for Churchill’s best interests.  Subterfuge, overall, is a story that can only really be let down by the fact that there is almost a bit too much in the four episodes causing some story cluttering and less room to breathe.  It is still recommended as Helen Goldwyn has some great ideas and manages to make the story relevant to modern times.  The actors bring the script to life and give the Seventh Doctor’s 2020 trilogy a high note to close on.  7/10.