In the midst of his self-imposed exile in Victorian London during “The Snowmen”, the Eleventh Doctor decides to ‘investigate’ a spike in levels of artron energy coming from a mortuary nearby. He soon encounters a man with greying hair who claims to be him trapped and channeling regenerative energy into the dead bodies in the room around him. The Twelfth Doctor has been drawn into a nasty and rather terrifying deathtrap with his entire future at stake and it’s going to take the help of his previous self to save the day…..if the two can find a way to get along that is…… 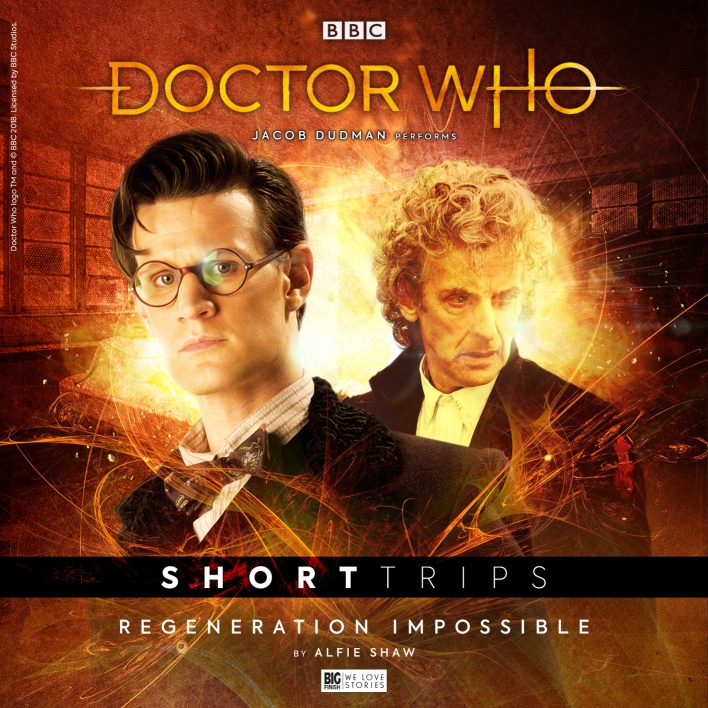 ‘Regeneration Impossible’ is the first multi-Doctor Short Trip and one that fulfils many a Whovian’s wishes of seeing the Eleventh and Twelfth Doctor interacting together for the first time. But short of that massive draw, it’s also a very tightly woven and fascinating story that manages to be far more than just another pointless fan-service. Alfie Shaw’s script builds a desperately dire situation with very high stakes and the clever manifestation of a dark villain uses the nature of the audio very effectively even despite the standard minimal soundscape that this range has been known for. However in this case though, the soundscape feels like exactly what it needs to be and the plot delves deep into the lore of the show with some interesting glimpses into the nature of regenerative energy, the past and present of each incarnation involved, and how the past will end up reacting and responding to the nature of what’s coming in the future. This makes this Short Trip far more engaging than others of the like and it’s a nice boost to a series that often struggles to keep the attention of those listening even despite it’s shorter runtime.

In terms of our two Doctors, the writing characterises both incarnations amazingly well and their chemistry is one of surprising and rather intense animosity and humour. Eleven by this point is deep into his state of isolation which means that his emotions are far more subtle than they otherwise could’ve been and the situation plays into his current pain and loneliness well which brings out a great monologue on his current state as the last of the Time Lords and the last of his own regeneration cycle. This jives surprisingly well with Twelve’s already darker personality in sharp barbs of wit and criticism but it’s surprisingly Capaldi’s incarnation who gets most of the comedy and positive lines of dialogue even as Eleven gets most of the brunt of the ‘saving the day’ work.

Despite how much they clearly dislike each other in a way that feels very reminiscent of the roughness between Two and Three, both incarnations do end up developing a healthy dose of respect for each other by the end and it concludes in an obvious but very action-packed way that needs to keep the timelines in check. It also must be said that in terms of performance, this is a masterful showcase for Jacob Dudman whose impersonations of both Doctors are at their absolute best here. He gets to make the story all his own while staying true to the spirit of the era and these characters and it really shows just how much of a talent he can be at his best when left alone with no other voices around him to bounce off of.

It might be perhaps this reviewer’s personal bias towards this era and these two incarnations but “Regeneration Impossible” represents another major Short Trip highlight if not THE Short Trip highlight of the year. Dudman’s impersonation of both Smith and Capaldi has never been better, the script is very intelligent in giving itself a reason to exist, and it genuinely does tug on a few heartstrings while giving fans of both of these Doctors exactly what they want to see in having them cross paths in a very unique way. It’s extremely short and simple but very very sweet and a love letter for the Moffat era and both of these Doctors at their respective points in their timeline. This is a special piece that deserves multiple listens and time devoted to it and it was well worth the long wait in seeing this one come to fruition. – 10 / 10