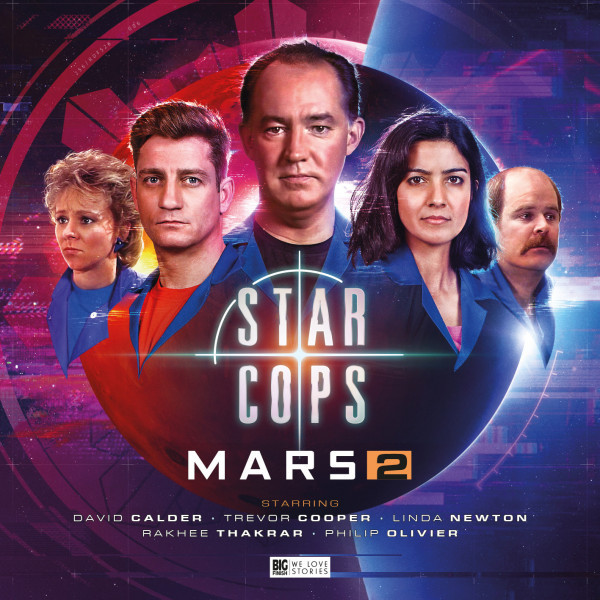 Eschewing many science fiction clichés of the time, Star Cops was fundamentally a smart police procedural, albeit with Spring a reluctant spaceman manoeuvred into his role. Across nine episodes, he built a team and brought his practical, no-nonsense approach to the Moon and various orbital space stations – dealing with terrorism, drugs, and the political shenanigans of his superiors. And distinctly no aliens! Resurrected by Big Finish in 2018, the audio continuation now stars Calder, along with Trevor Cooper and Linda Newton, who reprise their original characters of Inspectors Colin Devis and Pal Kenzy.

On the new Mars colony; despite there being approximately a thousand colonists across more than thirty, mostly privately owned bases, there has so far been no law enforcement. Nathan Spring is keen to remedy and has led a mission to prove his team’s worth and gain the assent of the colony leaders for a permanent Star Cops presence.

He is also keen to pursue an investigation into the work of Lachman Research and Innovation; led by the influential Byron Lachman, LRI plant themselves firmly on the radar when questions are raised about their work and seemingly limitless influence.

While Mars 1 ended on a cliff-hanger, this second volume spins back the timeframe, starting on the Moon some time earlier. The story goes on to play out before, concurrently with and past the first set’s dramatic ending. It is a skilful move from writer Andrew Smith, offering a jumping-on point for new listeners as he reveals Nathan’s motivations and sets up the villain of the piece. You could happily start your listening here and follow the tale, though I would really recommend you do not, as the first volume is well worth a listen too! Naturally, spoilers follow:

Out visiting a remote lunar outpost, where a Mars simulation has just come to an end, Nathan and Devis have a narrow escape when an out of control private shuttle nearly wipes them out. Inbound from Mars, investigations of the crashed ship reveal mutilated bodies, after which it is rather conveniently destroyed – or perhaps scuttled. When Nathan tries to investigate further, his enquires are promptly quashed from on high, prompting him to pursue a more creative approach…

Absent from the first Mars set, for reasons which now become clear, it is great to have Chief Superintendent Pryia Basu (Rakhee Thakrar) and Inspector Paul Bailey (Philip Olivier) working closely together. While she is the senior, undercover work is his territory and there are some terrifically tense moments as they infiltrate the LRI base at Mariner Valley. I enjoyed the tip regarding keeping your first name when creating a legend, and the mundanity of maintaining a stakeout too. It was also great to join the dots as the incident from ‘The Shadow of this Red Rock’ played out from the other point of view.

With all our ISPF regulars visiting Mars, I had been wondering if the Moon had been left to degrade into a hive of scum and villainy. Not so, as a namecheck for Chief Superintendent Brian Lincoln, Nathan’s former groundside number two, recently qualified for work on the high frontier, ensures things were left in good hands.

Tensions between the Star Cops and LRI escalate in the second episode, written by series director Helen Goldwyn. While Nathan plays the political game, hoping to find allies among the colonist leaders, the rest of the team play cat and mouse on Barak Obama base; searching for evidence which has mysteriously gone missing. Ratcheting up the conspiracy, they gain an unexpected ally in a former LRI nurse Jessica Regan (Neve O’Connell), and through her we begin to understand the monstrous scope of Lachman’s aims and the lengths he will go to conceal them.

With base commander Barbara Holmberg (Issy Van Randwyck) showing her true colours, Nathan is left to argue the Star Cops’ case in front of the great and the good of Mars. Meanwhile, there is plenty of action for the rest of the team, with Pal Kenzy, in particular, proving herself a force to be reckoned with!

Andrew Smith returns to scripting duties for an all-action finale, and I will be light on the details. Suffice to say, with LRI goons on there, keen to ensure what they have learned does not reach a wider audience, our heroes make a final stand. This brings the Martian adventure full circle, as a deadly showdown takes place at Olympus Mons base, in the shadow of the planet’s highest volcano.

This Mars series has been far more ambitious than the first, providing an intricately plotted and involving storyline which I am sure that will continue to entertain over repeated listening. Having laid the groundwork, this second trio of adventures ups the ante with even more action. The storyline keeps the whole team involved and once again, makes smart use of Martian geography – it is fun to google the locations. As long-term fans will recall, the final television episode tantalised us with an offer of Mars and this series has more than made good on that promise. Writer/Script Editor Andrew Smith provides some interesting writer’s notes on the Big Finish site – it is clear that this show is a perfect match for his love of research.

While Trevor Cooper’s lovable oaf Colin Devis may have mellowed somewhat over the years; his more objectionable attitudes necessarily moving with the times, he still gets some of the best comic lines. For her part, Linda Newton’s Kenzy remains as ballsy as ever, with her trademark sarcasm gloriously undiminished! For his part, David Calder remains as compellingly irascible as ever. This team of five does seem well-integrated too; with newer characters Priya and Paul now feeling just as essential as the original line up of Spring, Devis and Kenzy.

Among the guest cast, Mark Elstob, who is perhaps best known as Big Finish’s No. 6 in The Prisoner, gives a big, mannered performance as the uber controlling businessman Byron Lachan. He is clearly having a ball and he leaves no piece of audible scenery left unchewed, enlivening a character who is an excellent foil for David Calder’s principled Nathan. One notch down in the villainy, though more intimidating, is Mark Oosterveen’s amoral scientist Lewis Reynolds. Additionally, Issy Van Randwyck shines as Barak Obama base’s conflicted Barbara Holmberg, upholding the fine tradition of a Commander to bedevil the team.

As ever, the production values are exemplary throughout, with sound designer Steve Foxon providing a compelling blend of period cues and new effects, and a stirring score from Howard Carter. Two series in and I think I may have just about forgiven Big Finish for the loss of Justin Haywood’s marmite theme song too. (for the record, I remain on the love side of the argument and may have just pulled it up on YouTube while finishing this review…).

Whether there is more to come from the Star Cops on audio remains to be seen. I hope there is though, because it feels like they have barely scratched the surface of this world. There is still so much to explore, not least the origins of the mysterious “Box”, Nathan’s powerful pocket computer which speaks with his voice and seems a cut above the technology anybody else has.

With the eight episodes of Mother Earth, plus the six of the Mars series and The Stuff of Life audiobook, the audio series has now happily exceeded it’s original run. An excellent continuation which proves what Star Cops fans have always known…

For those keen to know more about Star Cops, the history of the show is to be chronicled in the forthcoming publication ‘Above the Law: The Unofficial Guide to Star Cops’ by Paul Watts. Tracing the programme’s journey from creator Chris Boucher’s early influences, to its rocky birth as a television drama and subsequent audio resurrection at Big Finish, it promises to be the definitive volume on the show. 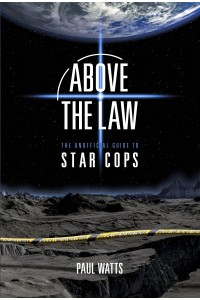 The book will contain interviews from many of the cast and crew, as well as an episode guide.
The book is available for pre-order at Miwk Publishing, to be published in August 2020, with author’s profits going to the Alzheimer’s Society.

Buy this story now on CD or Download: https://www.bigfinish.com/releases/v/star-cops-mars-part-2-2105