Big Finish Production’s decision to go back to earlier story arcs and TARDIS teams for some of their Main Range releases has often been a stroke of genius; it allows listeners to experience
teams whose stories are over for a burst of nostalgia and partaking in the age old tradition of the missing adventure. September’s Main Range duo-logy is one of these; reuniting Sylvester McCoy’s Seventh Doctor with Sophie Aldred’s Ace and Philip Olivier’s Hex for some adventures early in the team’s run of adventures from two writers new to Big Finish. Gemma Arrowsmith and Katharine Armitage provide their first Doctor Who stories with The Flying Dutchman and Displaced. 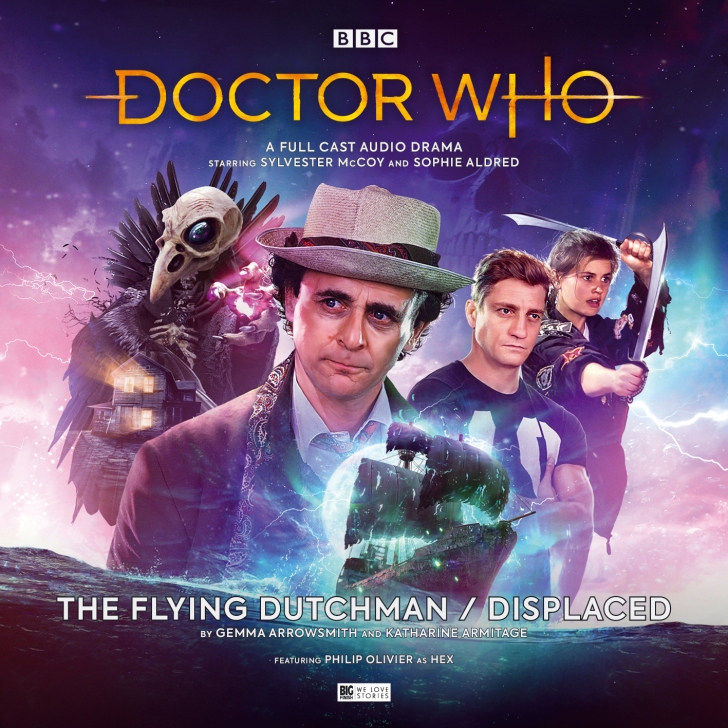 The Flying Dutchman is this release’s first story, and like the other duologies, takes up the first disc of the release and is an hour-long story. This is a pseudo-historical adventure concerning the myth of the ‘Flying Dutchman,’ a ghostly sailing ship which was said to signal misfortune and death. The Doctor, Ace, and Hex arrive on the good ship ‘Isabella’ which has come out of a
storm where the crew are terrified of the ghost ship which seems to be lurking on the horizon. Gemma Arrowsmith’s script is a fantastic premise, however, as a story there is something sorely lacking in what this actually script does and what it has the potential to do. The supporting cast of this story are essentially stock pirate characters which is a double-edged sword in storytelling. For a story like this where there is a limited runtime, drawing from stock characters can allow the writer to quickly communicate who these people are and what motivates them, but it means that the writer has a duty to ensure that they are doing something with these stock characters above a typical narrative. The Flying Dutchman is a story where ‘typical narrative’ is a phrase which describes exactly what Arrowsmith does.

The crew of the Isabella are all divided into the captain, the first mate, the crew members, and the cabin boy: all roles that the listener is familiar with, but Arrowsmith does not give these stock
characters a reason for being. They do not have lives outside of these little scenes that inhabit the story, nor do they really have any impact on the TARDIS team. This is a story where every
character, bar one, is written as static and unable to do anything outside of the hour that we have with them. The closest we get to a changing character, a character with a life and any dimension, is the cabin boy Archie, however, their character arc is a stock one about a cabin boy who’s actually a girl and wishes to defy the position in society that her sex gives her. There is a connection with Ace, but really Arrowsmith does not give this little cabin girl much to do outside of the longing to do some adventuring. It’s this little character which summarises the problems with The Flying Dutchman: no depth. The story is shallow and the hour runtime just lazes by with little of note occurring not giving the listener much in terms of enjoyment or active dislike. 5/10

Katharine Armitage’s Displaced fairs better in the enjoyment department and in the character study. Armitage writes a little ghost story, bringing the TARDIS to an empty house where the kettle is still on, the tea has not cooled, the doors are locked, but nobody is home. Like The Flying Dutchman, Displaced is a story where the setup is taken from a stock scenario, but Armitage elevates the stock scenario by not actually including many other characters. Instead the focus is squarely how the Doctor, Ace, and Hex react to this weird house and try to get to the bottom of where this poor family have disappeared to. There is a security system which has its own voice; one that keeps singing a sad song about drowning and repeating questions and not giving any answers to any of the questions the characters would have.

Armitage takes a leaf out of Marc Platt’s book and puts quite a few spooks in this weird house where there is a mystery to unravel and each the Doctor, Ace, and Hex get their own little moments to unravel pieces of the mystery. As this is a Doctor Who story, the answer to the question is one that involves aliens, but the alien plot-Gline is something that is a tangent to the
actual solution which is interesting. Armitage portrays a species of aliens who aren’t your typical evil Doctor Who villains, but a species who have just been wrapped into the events much
like the TARDIS team creating a late stage twist. As it is Armitage’s first story for Big Finish, Displaced does have a few moments where things are choppily paced, and some scenes do lead
nowhere, but it is a debut story that is interesting and gives the listener something more engaging after The Flying Dutchman. 7/10