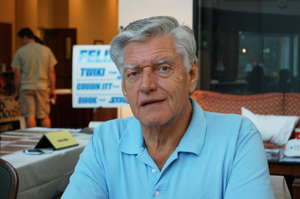 Prowse physically portrayed the role of Darth Vader in the original trilogy with the character’s voice being performed by James Earl Jones.

His agent Thomas Bowington said in a statement:

“May the force be with him, always!”

“Though famous for playing many monsters – for myself, and all who knew Dave and worked with him, he was a hero in our lives.”

Mr Bowington called the actor’s death, after a short illness,

“A truly and deeply heart-wrenching loss for us and millions of fans all over the world”.

Prior to his role as Vader, Prowse had established himself as a prominent figure in British culture as the first Green Cross Code man, a character used in British road safety advertising aimed at children.

In 2015 he starred in a documentary concerning that role, entitled I Am Your Father.

Prowse became a popular guest on the Comic Con Convention circuit up until his retirement in 2016.

Mark Hamill, who played Luke Skywalker in the Star Wars movies, said he was “so sad” to hear the news.

So sad to hear David Prowse has passed. He was a kind man & much more than Darth Vader. Actor-Husband-Father-Member of the Order of the British Empire-3 time British Weightlifting Champion & Safety Icon the Green Cross Code Man. He loved his fans as much as they loved him. #RIP pic.twitter.com/VbDrGu6iBz