Terror of the Master is a bonus audiobook included in the limited edition of Masterful written by Trevor Baxendale and narrated by Jon Culshaw. Unlike other releases from Big Finish Productions, this is not an audio drama, but an audiobook with the occasional sound effects and as such it can only rely on the actual prose of the storytelling and the narration. Culshaw is an excellent narrator, using his impressive vocal range and variety of impressions to bring to life the Jon Pertwee era. While Masterful was a celebration of the Master, the incarnation played by Roger Delgado was not included due to Delgado’s tragic passing in 1973, so for the limited edition only Trevor Baxendale was commissioned to write a three and a half hour story featuring the Third Doctor, UNIT, and the Master; set right after The Green Death. Like many of the Pertwee serials, ‘Terror of the Master’ has a political bent, once again tackling pollution and the increasing global temperatures with a kindly scientist promising to fix Earth’s problems with a revolutionary new process that only he can know the exact details of and behind him is the Master. The Master has plans to take over the world using an alien creature in a story that most closely resembles that of The Claws of Axos with Dr. Drake in place of Axos and the Axons, without the Tory MP. On that front Terror of the Master is a fairly standard affair from Baxendale, with a prose style (and runtime) that intentionally feels like that of a Target Novel of a standard serial that would have been released during that time period. 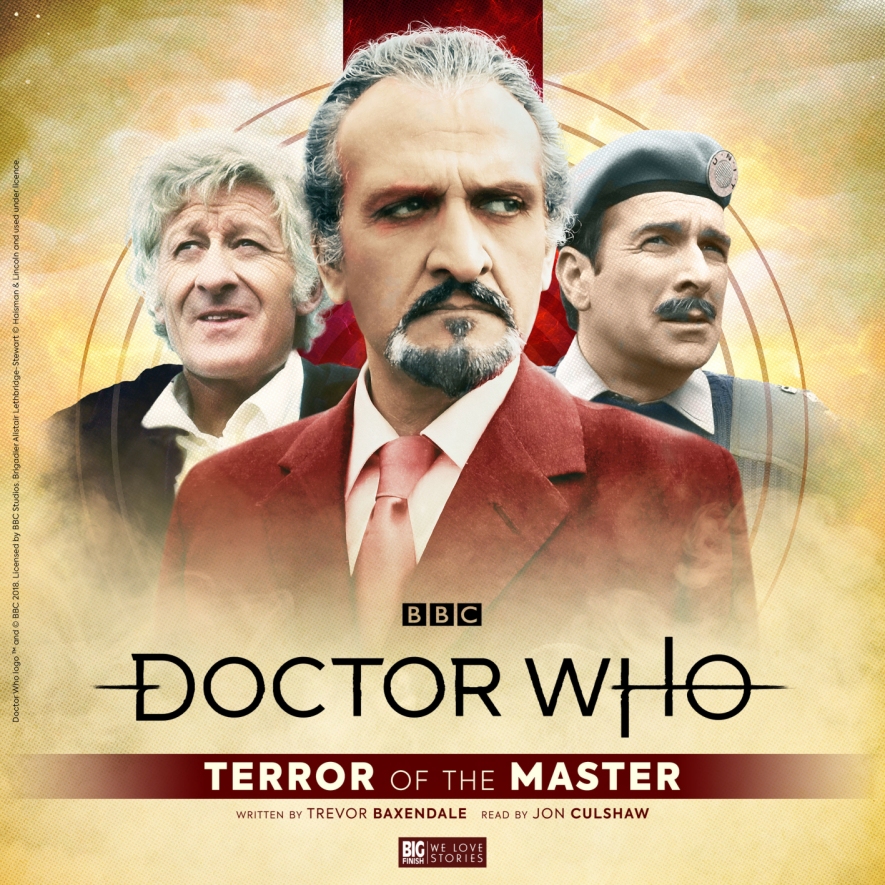 This is a story, however, that takes full advantage of its place in Doctor Who’s vast history, exploring the breakup of the UNIT Family. This event wasn’t done out of malice, but of moving the Third Doctor’s characterisation and era along by restoring time travel to the TARDIS at the end of The Three Doctors and Jo Grant leaving at the end of The Green Death. The Doctor had no ties to the Earth except UNIT itself and wouldn’t fully return to leaving Earth behind until his regeneration; and Baxendale explores why here. The Doctor is characterised as wanting to leave the planet behind, but bound by a sense of duty towards the Brigadier and UNIT. He’s distracted himself this time by building what will become the Who-mobile and finding this mechanic character, Daisy Hanson, as a possible new companion. Daisy is a relatively minor character and if the story went a different way her as companion could have been incredibly interesting as it would be a UNIT soldier travelling time and space in the TARDIS. This is never meant to be, which from a production standpoint works really well as this story is only in the limited edition of Masterful. Culshaw brings the Doctor to life incredibly well, hitting the mannerisms and vocal inflections of Pertwee, though personally Tim Treloar’s interpretation remains my Pertwee successor. Baxendale’s character work with the Doctor really is the novel’s highlight, however, the length does drag in the middle.

The Brigadier, Sergeant Benton, and Captain Yates all make appearances in the novel, but are reduced to their capacity of Season 10 in particular, with the Brigadier being played almost as a buffoon in this one like The Three Doctors which feels a bit too pointed. The Brigadier acts as if global warming is somehow not possible and is more apathetic to the scenario until the Doctor can show that there is danger in the plot (though Culshaw brings the Brigadier to life beautifully). Benton and Yates are also window dressing throughout the book which is fine as they aren’t really the focus; the focus of the story is the Doctor. The Master is also a delight as Baxendale is clearly having fun writing for the original version of the character. The scheme is as hair-brained as a Delgado Master scheme fitting right in with the era.

Overall, Terror of the Master is a story that really is an exploration of the Pertwee era and the Master’s place within it, done through the format of a Target Novel in three hour long parts. Trevor Baxendale provides an excellent story while Jon Culshaw sucks the listener in. 8/10.

Order from Amazon
Check out other Big Finish reviews.

2 thoughts on “Review: Terror of the Master (from Masterful limited edition)”