Stranding the Eighth Doctor on Earth was by no means a new idea, it had been done in the Eighth Doctor Adventures novels, but making him a landlord with Liv and Helen made for an interesting change. Stranded 1 was released way back in June 2020 when we were all in lockdown and the future releases were sadly delayed, with Stranded 2 moving from its original November release date to March 2021. Stranded 1 was one of those releases while where I enjoyed it quite a bit, I felt slightly underwhelmed by the premise as it was very much Doctor Who does a soap opera, but sitting down to listen to Stranded 2 made me acutely aware of how I have missed this ensemble cast and their interactions. Like Jon Pertwee’s second season bringing some time travel back, Stranded 2 still contains four earthbound stories, it is the first to actually bring these new companions and residents of Baker Street into the TARDIS and exploring their history and interpersonal relationships. This premise allows it to stand out from the first set and the Pertwee era in a number of ways which makes it incredibly fun. As Stranded 2 is still kind of like Doctor Who does a soap opera, this review may contain minor spoilers for certain plot developments in the characters. This review was also written with each section right after listening, so each section may not reflect how any story arcs happen. 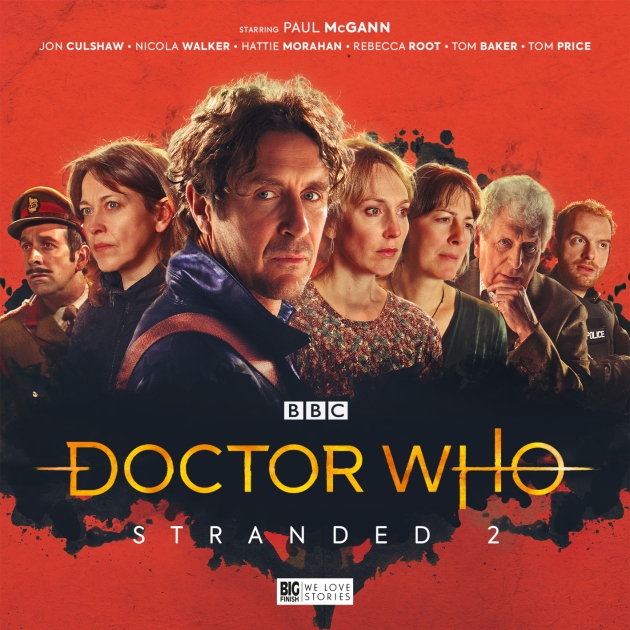 The set opens with Matt Fitton’s ‘Dead Time” where the Doctor gets the TARDIS working again and wants to go on a test flight, however, it accidentally strands him, Liv, Helen, Andy, and Tania all in the far future of Earth. The Earth is a barren wasteland but there is something waiting for the travellers in the barren wastes. Dead Time has a villain which needs to be defeated, however, in a stroke of genius Matt Fitton uses these robots, because that’s essentially what they are, robots, to explore what has happened to the characters in between Stranded 1 and two. Tania has to overcome the fact that her girlfriend is a time traveler, Helen has to adjust to the fact that she’s still stuck in an uncertain future, Andy has to stop lying about Torchwood to Tania, and Liv has to accept that she’s in a relationship. They all have to stop Robin from getting himself killed after stowing away on the TARDIS. Robin and Helen’s discussions are also absolutely brilliant. The only character here whose arc is a bit underdeveloped is the Doctor’s: McGann in the script is given this grumpy persona which is understandable given the circumstances he’s found himself in, but it is a performance that doesn’t give McGann a lot to do. It’s Rebecca Root and Tom Price in particular who are stealing the show in this one as they are paired off for a portion of this story which is a lot of fun; especially a point where the state of Torchwood being dissolved comes right into the open, though the idea that Andy has a girlfriend seems to cause more heartache. As this set is scored by Jamie Robertson there are some beautiful uses of leitmotif and Benji Clifford’s sound design excels at making the soundscape sound empty and desolate which is difficult to do without also sounding lazy. It’s a story that starts the set of strong with some small hints that the other residents of Baker Street are hiding things which may cause grief, meaning that this is going to have some sort of an arc focused on these characters, meaning Stranded is setting itself apart from the previous Eighth Doctor miniseries releases. 8/10.

Roy Gill’s story is a pun. UNIT Dating is a story all about members of UNIT who are, or will be dating. This is an important distinction as some may feel somehow cheated in believing Gill was going to be tackling the UNIT Dating Controversy, when in fact he is telling a parallel story as to how two members of Baker Street ended up dating in UNIT. As Dead Time begins with a test run of the TARDIS, the Doctor just can’t leave well enough alone, taking Andy along with him to the 1970s to try and find some things to fix the TARDIS’s ability to travel in space while interfering with a time travelling Ogron, Brigadier Lethbridge-Stewart, and the couple upstairs at Baker Street, Tony and Ron. Meanwhile in the present, Liv and Helen are keeping Tony and Ron company as their memories seem to be slipping away and a radio is playing a song from the 1970s on repeat. Liv and Helen’s line of the story is one where the characters actually get a chance to really get to know one another. Both are characters out of time, and Helen who outwardly appears to be coping well to the changes in the norm that 2020 brings, is undergoing her own trauma due to time travel bringing up the fact that previous trauma was unavoidable. Gill is unafraid to take large note of the regressive nature of the 1960s United Kingdom and what that meant for families with undesirable members. Hattie Morahan in particular gives a powerful performance in the conclusion to this story where Gill spends some time in reflection on being out of her own time, something that was lacking in Stranded 1. I am of course speaking of those who are LGBT+ and a lot of UNIT Dating involves exploring the blossoming relationship between Tony and Ron, which Andy makes the large mistake of putting his foot in by pretending to be Joseph Grant when infiltrating UNIT HQ with the Doctor. Tony in particular, played by Jeremy Clyde and Ewan Goddard, spends much of the story in reflection trying to hide his sexuality which ends up causing an almost comedy of errors. The Doctor spends much of this story with the Brigadier who is played masterfully by Jon Culshaw giving us something we only saw in Minuet in Hell. The Brigadier immediately accepts the Doctor and Culshaw’s impression is once again flawless, which is perhaps the best way to describe UNIT Dating. 10/10.

Baker Street Irregulars by Lisa McMullin is another example of parallel plotting; sending the Doctor, Helen, Zakia, and Aisha back into the depths of World War II while Liv and Tania are back in the present defusing an unexploded bomb which is not all that it seems to be. Zakia and Aisha’s grandmother was part of the Special Operations Executive under Winston Churchill, also known as the Baker Street Irregulars and the Doctor takes them back to see just how awesome she was in life. The story essentially has two plots going on with Tania and Liv’s relationship troubles being the backdrop to the alien goings on which underpin Stranded 2. Rebecca Root and Nicola Walker are excellent and McMullin gives both characters reasons to feel unsatisfied with their relationship as it has been a difficult one to deal with Tania keeping her Torchwood status secret. The bomb is an interesting little allegory for their relationship, something that could blow up, but is eventually dealt with, though as it’s only the episode’s B plot it feels like the World War II stuff perhaps gets in the way. The plot in the Blitz is interesting as Nisha, played by Anjli Mohindra, is captured by Nazis and it is up to the Doctor and Zakia find a way to rescue her. McMullin doesn’t pull any punches in showing the horrors of war in this story as Nisha is tortured and there are musings on why the Nazis hate indiscriminately. There is perhaps something a bit standard of a World War II story, but Lisa McMullin makes it interesting and turning it into a spy thriller feels like a unique take on the example. Though it once again shows just how Stranded 2 is leaps and bounds ahead of Stranded 1 in terms of quality bringing the penultimate episode to an emotional close with one final twist about the characters’ relationship and a tease from Tania about where the set is ending. 9/10.

Stranded 2 ends with John Dorney’s The Long Way Round; a story all about exploring the identities of the characters and just what their relationships mean to one another. Dorney begins in media res, never actually allowing the listener to see the start of the story. We are thirty years in the future, the Doctor, Andy, Tania, Liv, and Helen have all been captured by a fascist British regime and are slowly being interrogated by a mysterious woman played by Annabelle Dowler, while the Curator speaks with a little girl, Gemma. Tom Baker as the Curator is a very different character from the Fourth Doctor. There is this kindness between him and Gemma where the relationship forms on buying ice cream and being generally nice to one another. Baker is essentially playing himself which is wonderful and provides some levity in the rather intense interrogation scenes. Dowler’s performance is intimidating, putting Andy and Tania on edge the most, threatening them with a lot of their worst fears. Their identities, Tania’s especially, are placed in question, both being threatened with erasure in many ways. The scenes build to a point of tension where you think everything’s going to break and then they keep going. Dorney’s script is airtight and it leaves the listener just wanting Stranded 3 without just being setup for Stranded 3. 10/10.

Overall, Stranded 2 is leaps and bounds above the first set putting the character drama to the front of the set and setting up some great tragedy for future sets. It’s also a relief to have something to help with the existential dread of the pandemic. 9.25/10.

Order from Amazon or Forbidden Planet
Check out our Big Finish reviews.

2 thoughts on “Review: Doctor Who – Stranded 2”