It is the 42nd film in the DC Universe Animated Original Movies line and is based on the DC Comics storyline of the same name.

Batman: The Long Halloween is a 13-issue American comic book limited series written by Jeph Loeb with art by Tim Sale. It was originally published by DC Comics in 1996 and 1997.

It’s a dark time in Gotham City. Held hostage by the powerful Falcone crime family, the city is rife with crime and corruption. Adding to the chaos is the mysterious Holiday killer, who has been targeting the underworld and leaving a trail of terror…and body bags. Batman, Lieutenant Gordon and D.A. Harvey Dent race against the calendar as it advances toward the next ill-fated holiday. Based on the critically acclaimed graphic novel, Batman: The Long Halloween, Part One begins a twisted chain of events that will forever change the Dark Knight. 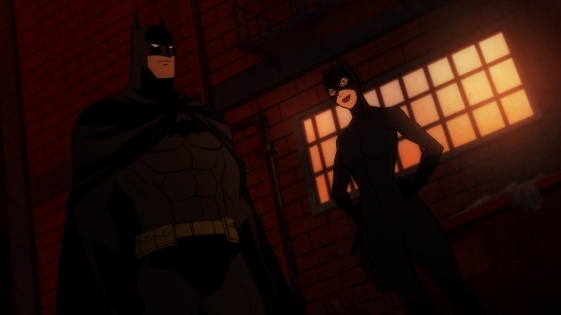 The film marks Rivera’s final film role before her death in 2020.

The film (at least up to the end of Part 1) stays fairly faithful to the comic series whilst still throwing in some twists and surprises for those that are familiar with the story. The story focuses on Batman/Bruce Wayne (Jensen Eckles), Harvey Dent (Josh Duhamel) & Lt. Gordon (Billy Burke) as a the new mysterious ‘Holiday’ killer plagues Gotham’s underworld and sets off a series of events that will test the trio’s morals and values to the core.

This story also does an excellent job of examining the toll their exploits take on their personal lives and those around them. 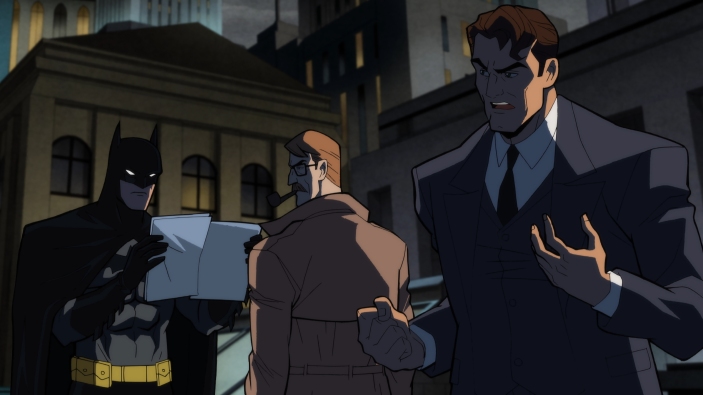 Tim Sheridan’s script whilst keeping mostly faithful to original does feel like a refreshing of the dialogue with some more current references and humour whilst still feeling fitting to the setting and atmosphere.

The animation style is a blend of DC’s modern animated style and the more classic and artistic comic book feel of Batman The Animated Series and seamlessly blends fast paced action scenes with more reflective and slower shots that seem like panels out of the comic book with a timeless-looking Gotham sure to satisfy bat-fans old and new. There is also an extensive cast of characters backed up by a stellar voice cast consisting of franchise favourites and newcomers.

Troy Baker gives perhaps one of his best performances as The Joker here and it’s a real standout merging some funner elements of the Hamill/Romero joker but with an underlying sense of menace; unclear of his intentions in Part 1 and not being the main villain of the piece he is left to wreak havoc around Gotham.

There are also great cameos from the rogues gallery that are sure to play larger parts in part 2; especially David Dasmalchian’s debut as the lesser know villain Calendar Man and Fred Tatasciore as Solomon Grundy.

4.5/5 – Ending part one perfectly and flying through its 1hr 25m runtime – our only quibble is DC’s choice not to release this as one long movie and we can’t wait for Part 2 next month.

Order your copy of Batman: The Long Halloween Part 1 [Blu-ray] on Amazon now.

Preorder your copy of Batman: The Long Halloween Part 2 [Blu-ray] on Amazon now.

8 thoughts on “Review: Batman – The Long Halloween, Part One”