The Phantasm Sphere Collection is being re-released this summer. 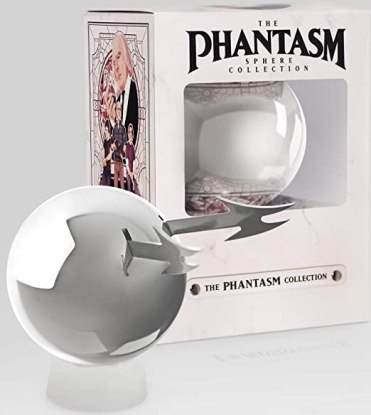 This set from Well Go USA includes all five films in Don Coscarelli‘s franchise, along with an officially authorised, full-scale replica of the original Phantasm killer sphere prop.

The new limited-edition collection of the classic Phantasm films includes a scale-replica of the Phantasm sphere. This sphere was sized to the exact measurements of a screen-used prop in Don Coscarelli’s personal collection.

The Phantasm Sphere Collection also debuts a new 4k scan from the original camera negative of PHANTASM II. For the first time ever, this new transfer of Don Coscarelli’s director’s cut includes the never-before-seen X-rated sphere/gore sequence banned by the MPAA at the time of it’s theatrical release. Coscarelli supervised and approved this new transfer. Experience PHANTASM II like never before.

PHANTASM III: LORD OF THE DEAD
Special Features: Audio Commentary with director Don Coscarelli and editor Norman Buckley – Audio Commentary with actors A. Michael Baldwin and Angus Scrimm – It’s Never Over: The Making of Phantasm III: Lord of the Dead – Balls of Steel–Bob Ivy’s Stunt for the ages – Behind the Scenes Footage – Deleted Scene and more…

Get your copy of The Phantasm Sphere Collection on Amazon US now.