Everybody’s Talking About Jamie is a 2021 biographical musical drama film directed by Jonathan Butterell (in his feature directorial debut) from a screenplay by Tom MacRae based on the stage musical of the same name and debuts September 17th on Amazon Prime Video.

Today EW exclusively revealed that RuPaul’s Drag Race winner Bianca Del Rio will feature in a cameo appearance in the movie version of the West End musical she starred.

“When they said we’re doing the film, I was on the road, and [the director] reached out and said, ‘we have this small cameo, would you be interested in doing it?’ I assumed, when I got the call, that someone was sick and I was taking over!”

Grant revealed during the interview that, prior to boarding the project, he’d “never seen a drag show” in his life, but made it a point to binge-watch “every season of RuPaul’s Drag Race in three weeks” to prepare. 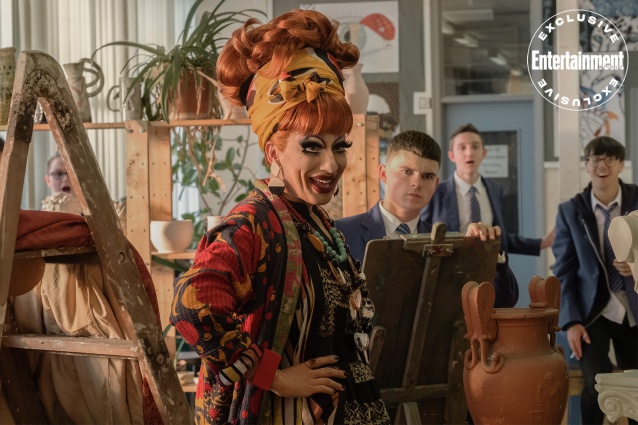 He found the show — particularly Del Rio’s season 6 run — “unbelievably sensational,” and Del Rio similarly felt the same about traveling to the U.K. to film her scene: A dreamlike musical sequence where she, in a comical, trippy switch in Jamie’s imagination, momentarily swaps places with an art teacher at the teen’s school.

Check out the full interview here.

Get your copy of Blame it on Bianca Del Rio: The Expert on Nothing with an Opinion on Everything on Amazon now.