40 Years Ago visionary director Sam Raimi brought the The Evil Dead to life on our screens with his own unique visual style and mix of comedy and horror and his indie low-budget debut feature would go on to spawn two hugely successful sequels, a remake, TV show, comic books, video games, stage productions, countless merchandise and launched Bruce Campbell’s career as an action/genre hero as well as changing the face of the genre forever.

Raimi, Robert Tapert, Bruce Campbell and their friends produced the short film Within the Woods as a proof of concept to build the interest of potential investors, which secured US$90,000 to begin work on The Evil Dead. Principal photography took place on location in a remote cabin located in Morristown, Tennessee, in a difficult filming process that proved extremely uncomfortable for the cast and crew; the film’s extensive prosthetic makeup effects and stop-motion animations were created by artist Tom Sullivan. The completed film attracted the interest of producer Irvin Shapiro, who helped screen the film at the 1982 Cannes Film Festival. Horror author Stephen King gave a rave review of the film, which resulted in New Line Cinema acquiring its distribution rights.

The Evil Dead grossed $2.4 million in the US and between $2.7 and $29.4 million worldwide. Both early and later critical reception were universally positive; in the years since its release, the film has developed a reputation as one of the most significant cult films, cited among the greatest horror films of all time and one of the most successful independent films. It launched the careers of Raimi, Tapert, and Campbell, who have continued to collaborate on several films together, such as Raimi’s Spider-Man trilogy. At the time of release the film faced some controversy. Raimi did not hold back on the gore which led to the film’s receiving an X rating and being named a “video nasty”. The film was and is still banned either theatrically or on video in some countries. 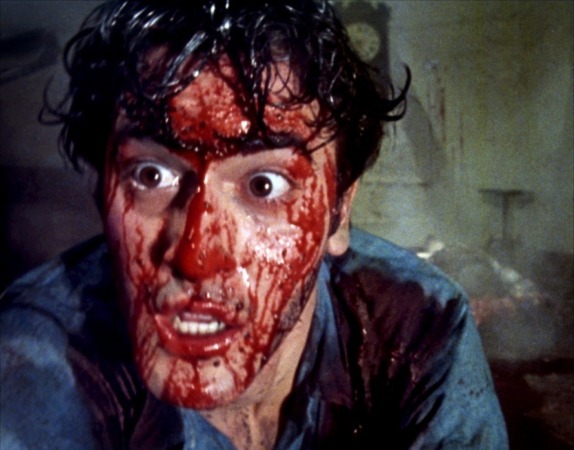 The film also stands out due to having Ash Williams (Campbell) as a male protagonist in a genre that mostly uses the trope of the ‘Final Girl’ female survivor which made the film ahead of it’s time. Visually Raimi developed some highly effective tricks such as the use of extreme angles (known as Dutch angles) and moving the camera on a wooden board rather than the more smooth and expensive Steadicam which has now become known as ‘Shaky’ cam and provides the fast and eratic POV shots the franchise has become know for. The film also benefits from a sweeping score from Joseph LoDuca (whose work can also be heard more recently in the Chucky TV series) which mixes piano, synth, brass, strings and orchestral elements to create a Bernard Hermanesque score which would be equally suitable for a Hollywood thriller).

The Evil Dead was followed by a series of sequels. The franchise is noted from attracting attention for each sequel featuring more comedic qualities than the last, progressing into “weirder” territory with each film. Evil Dead 2: Dead by Dawn was a black comedy-horror film which released in 1987, and was a box-office success. It received general acclaim from critics, and is often considered to be superior to the first film. Interestingly, Evil Dead 2 continues Ash’s story against the evil force, but not before retconning the first movie.The reason for the retcon at the beginning of the movie was explained by Campbell in a clip from the special features of Evil Dead 2 where he revealed that Raimi didn’t own the rights to his own movie, so they had to shoot a recap with different actors, which ended up becoming a different story. It’s also the film where Ash gets his signature weapon: a chainsaw attached to his right arm.

This was followed by Army of Darkness, a comedy fantasy-horror film was released in 1993. At that time, Raimi had become a successful director, attracting Hollywood’s interest. His superhero film Darkman (1990) was another box-office success, which led to an increased budget for Army of Darkness. The film had 22.8 times the budget of the original Evil Dead, though it was not considered to be a box-office success like its two predecessors. It is the most far-out entry in the franchise and introduces some mystical time travel; with a large part of the film taking place in the middle ages.

Talks for a fourth Evil Dead film began in 2004 and he project was officially announced in July 2011, with Ghost House Pictures producing it, with Diablo Cody in the process of revising the script and Fede Álvarez chosen as the director.

The fourth installment in the Evil Dead franchise, it serves as a soft reboot/continuation of the original film series. The film follows a group of five people being possessed and killed by supernatural entities in a remote cabin in the woods.

Ash and the deadites finally made their way to  to the small screen! Ash vs Evil Dead the series was developed by Sam Raimi, Ivan Raimi, and Tom Spezialy for the Starz network and filmed in New Zealand. It is set in Raimi’s Evil Dead universe, with Bruce Campbell reprising his role as Ash Williams from the original trilogy. 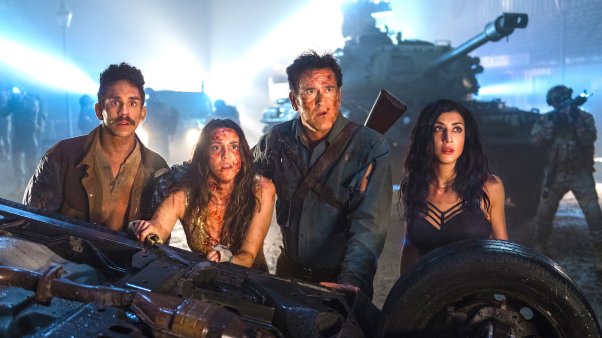 The series first started life as two competing ideas for a fourth Evil Dead film. However at the time the Raimi brothers did not know how to get funding for the film and so it was instead written as a TV show. Writing for the medium presented new challenges for Sam as he had to make the series accessible to new viewers as well as create new characters to “bounce off of”. The project was first officially revealed by Raimi at a surprise appearance at the 2014 San Diego Comic-Con.

The next film in the Evil Dead franchise is currently titled ‘Evil Dead Rise’, and is being directed by Lee Cronin (The Hole in the Ground), it won’t feature Bruce Campbell as Ash Williams, and it’s not going to be set at a cabin in the woods….Campbell himself teased over the weekend that Evil Dead Rise is at least set in a city.

“The Evil Dead are going to fuck up a city this time,”

Campbell will be producing Evil Dead Rise alongside Sam Raimi.

Here’s to another 40 years of The Evil Dead – STAY GROOVY!

To celebrate the 40th anniversary The Evil Dead franchise has yet another brand new box set on the way from Lionsgate –  “The Evil Dead Groovy Collection“!

This collection brings The Evil Dead, Evil Dead 2, and all three seasons of Ash vs. Evil Dead to 4K Ultra HD & Blu-ray in one box set. The set is due for release November 16 on 4K Ultra HD + Blu-ray + Digital from Lionsgate. Army of Darkness is not included in this set.