I, Jacobi is the latest in of the occasional ‘Big Finish In Conversation’ series, which offers a long-form interview with one of their stars. In this instance, it’s stage and screen legend Sir Derek Jacobi, (though he eschews the honorific and suggests “Del-boy” instead!) 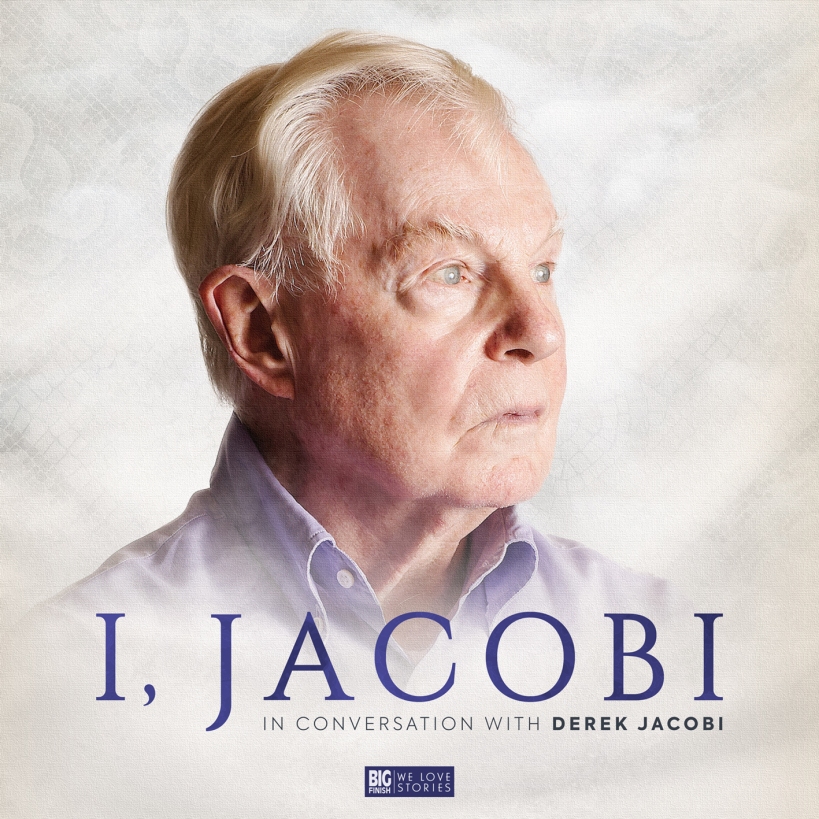 Though he made only a single audio appearance as an Unbound Doctor, back in 2003, his relationship with the audio production company has become a regular and fruitful one since 2017, when he was invited to reprise his role as the Master. Briefly the face of the Doctor’s enduring Time Lord nemesis onscreen, Jacobi played the villain (and his kindly professorial alter ego) memorably against David Tennant’s Doctor in 2007s Utopia, before regenerating into John Simm. In the final few minutes of that story, after opening the Master’s fob watch, he was remarkable; coolly despatching his chattering assistant and leaving us all wanting more.

Jacobi has now headlined six boxsets as The War Master, with two more announced. He’s also played the role in other ranges, such as UNIT and The Diary of River Song and met other incarnations of the villain. Additionally, he’s played Cole Hawlings in their adaptation of John Masefield’s enduringly popular festive tale The Box of Delights.

Of course, Doctor Who is but a footnote in a varied career, so interviewer Scott Handcock starts at the beginning. A war baby, Derek Jacobi was born in 1938, in Leytonstone and he fondly reminisces about his “angelic” supportive parents. Post-war, recovery from a bout of childhood fever saw him bed-bound for a year and he ascribes his well-spoken voice to hours of radio listening.

Back on his feet, there was swimming and he was good enough for Olympic training – but he found it too boring. Instead, school productions beckoned, and their version of Hamlet went to the Edinburgh Fringe with Jacobi in the title role. He achieved some acclaim, not least because a couple of noted critics fell out over the show.

Derek considers himself to have been incredibly lucky throughout his career. One example of this is not having to do the entrance exam for his college at Cambridge as the interviewer was in a good mood after the annual boat race went their way. Reading History, a subject that has always fascinated him, he achieved a 2:2 – this despite faking a feint in an exam (for which he shows no remorse, as it was a great performance!)

Post-University, they discuss his major roles, from starting out at Birmingham Rep though to working with Sir Lawrence Olivier and the National Theatre. These remembrances boast a surfeit of household names and there’s one quite astonishing anecdote about Noel Coward which I wouldn’t dare spoil.

Naturally, there’s plenty of time spent on the pivotal I, Claudius, which made him a household name. Despite am initially po-faced reaction from the critics it built an audience across its run. A huge hit in America, within two years Derek was leading a cast on Broadway. Not that his career hasn’t had its ups and downs; after drying onstage during Hamlet, during the “To be or not to be” speech, he suffered a bout of stage fright which kept him off the stage for two years.

The conversation ends up with more recent work, such as Last Tango in Halifax and the sitcom Vicious, in which he starred with Ian McKellan, and his friendship with Kenneth Branagh. There’s also talk of a role he turned down and his supportive fans, whom he speaks of warmly.

Scott Handcock is an excellent interviewer and was clearly very well prepared. To be fair, we expected he would be given his work on the podcast From Queer to Eternity. He brings his subject gently back on topic when required and knows what anecdotes to trigger. The pair clearly have a warm working relationship too, which makes the conversation flow easily; far more than just a chat through a memorable career, I came away with a real sense of the man who is sharp, insightful and funny too.

At one point, Derek is challenged as to what else he might have done but act. There was a fall-back plan given as a sop to his concerned parents, that he might teach history, but in truth “It was always acting. There was no other plan.”

I, Jacobi – In Conversation with Derek Jacobi is available on download from Big Finish.