The Eighth of March was a special release on International Women’s Day 2019 to celebrate the female characters of Doctor Who, essentially serving as example episodes for various series from (mostly new) female writers: The Paternoster Gang, The Diary of River Song, UNIT, and a story set in the Virgin New Adventures. Here we are, three years later and for International Women’s Day 2022, a three disc follow up has been released in the form of The Eighth of March: Prisoners of Time, exploring Lady Christina, Jenny: The Doctor’s Daughter, a Romana spin-off, and a tribute to The Sarah Jane Adventures with two new writers, Abigail Burdess and Nina Millns and an opening story from Lizbeth Myles (who has been contributing to Big Finish since 2014). Like the previous box set, this is an incredibly versatile set as the only real brief is that there is a female lead and it is set in the Doctor Who universe, giving the writers free rein on what they wish to play with. There also are two female directors assigned to this release, Louise Jameson tackling the first episode while Helen Goldwyn directs the other two, both bringing their distinct style to give each story its own flair. 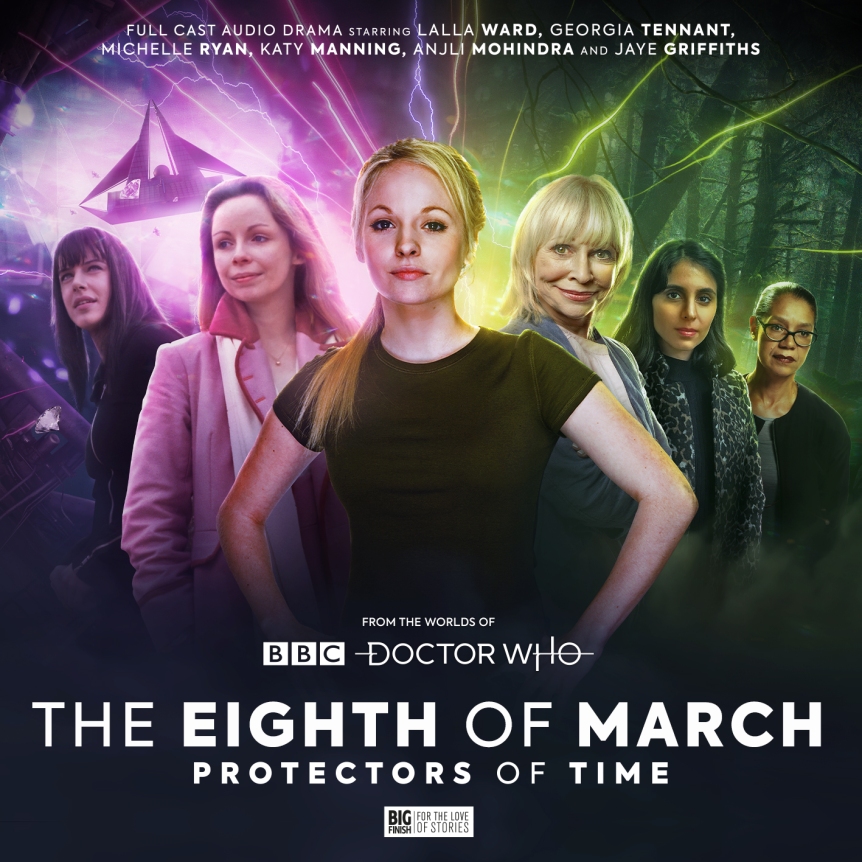 The biggest issue with giving an author free rein is too much creativity for the single hour stories that makes up this box set. That is clearly seen in the middle episode, Abigail Burdess’ Prism which is a crossover between Jenny: The Doctor’s Daughter and Lady Christina with Georgia Tennant and Michelle Ryan starring. The largest issue with this episode is that it is essentially two episodes smashed together into one which makes the first two thirds or so of the episode incredibly jarring. Michelle Ryan and Georgia Tennant are both great when they do get to interact, and Tennant as Jenny also carries the first two thirds in investigating while Christina feels as if there isn’t much for her to actually be contributing except explaining who she is and what she has been doing since Planet of the Dead. Burdess does play around with quite a few interesting ideas on how today’s world treats women, over 100 years on from suffrage and the work that still needs to be done, however, a lot of those ideas are packed into an already cramped script which means that there simply isn’t enough time to explore them all. It tackles it mainly from the angle of today’s capitalist and incredibly corporatist society with the corporation of this story essentially kidnapping and killing women to become their electronic secretaries, Jenny owning several stocks and having to navigate a world not really open to women, and Christina de Souza being a character all about stealing from the rich. The last third is excellent and is where the ideas come across the best with a really strong conclusion, but this one almost needed two hours to actually make the crossover work as best as it could be. Still, Burdess shows promise as a writer and it’ll be interesting to see how she follows this up in a hopefully more focused way.

The set actually opens with Lizbeth Myles writing a story that is a peak into Romana’s adventures in E-Space on her journey to free the Tharils from the shackles of man. Stolen Futures is a lot of fun. Lalla Ward as Romana carries the episode with John Leeson as K9 showing some great support while Myles’ script does an excellent job characterising what Romana picked up characteristically from her time with the Doctor, and how it softened her from the rather icy Time Lady from Season 16 to the capable saviour of the Tharils we see here. This is also essentially a mystery thriller with different ideas on what the Tharils can become after their freedom with David Warwick’s Tyro being the main member of the supporting cast who has found his own little kingdom in E-Space that has been sending humans into the clutches of the Gundan’s. As a sequel to Warriors’ Gate, dealing with some of the same themes and characters, including John Dorney reappearing as Biroc after his performance in The War Doctor Begins, it is incredible to see Myles tackle what is a very surreal and complex story conceptually while communicating it to the audience with ease. Warriors’ Gate is a story that I never really connected with, though it does seem to be fairly polarising in the fandom at large, but as someone who isn’t a fan I quite enjoyed this. Louise Jameson’s direction is also fantastic, feeling like Lalla Ward is performing the character for an old friend which creates a wonderful passion for the role.

The Turn of the Tides, however, is the capstone of this set. From new scriptwriter Nina Millns, it is an ecologically charged story opening in the Amazon with Jo Jones, bringing in UNIT and Rani Chandra, and eventually landing on the Moon. It’s a story all about some of the issues involved with trying to save the planet through the eyes of an alien interloper in Indigo Griffiths’ Mellissa and Sam Stafford’s Matasar. There are also themes of heritage and how one can reconcile the negative aspects of their past with the conclusion of the story being incredibly effective and emotional. Katy Manning is a delight and her chemistry with Anjli Mohindra as Rani Chandra feels like a test for a complete run of this pairing of characters. Millns’ doesn’t attempt to recapture anything from The Sarah Jane Adventures, characterising Jo perfectly in like with her television performances and not just a substitute for Elisabeth Sladen. Much of the story works incredibly well to go from setting to setting naturally with the stakes slowly raising across the hour. It is also just an impressive debut of an episode for a new writer which I must applaud Millns for delivering on a very interesting premise. The script goes to a few darker places and emotions which are handled incredibly well in the hour long episode. There is also an ending implying a follow up is possible as the characters from The Sarah Jane Adventures could always appear again.

The Eighth of March: Prisoners of Time is perhaps best summarised as an anthology where each episode has a different strength. It is great to see a set just built up around a theme and always a delight to see new blood to the writing staff, even if some of the stories are slightly uneven in pace. It’s a wonderful celebration of its characters and has a great diversity of ideas to sell the set on for a wide range of people. 7/10.

Order on CD/Download from Big Finish
Review:  The 8th Of March