Ben started out as a Technology blogger before branching out into writing about Film & TV. An obsessive fan of indie film & dark comedies you will probably find him waxing lyrical about the movies of Kevin Smith, The Coen Brothers, Robert Rodriguez or Quentin Tarantino. He also loves to discover & promote cult, low-budget indie gems that no-one has heard of. Favourite films include Clerks, Dogma, From Dusk Till Dawn, Pulp Fiction, Office Space, Shallow Grave & Blood Simple.  An avid Apple user for over 15 years he also writes all the technology content for the site.

Also a keen supporter of crowd-funded films, see some the projects he’s been involved with on IMDb. He is a Rotten Tomatoes Tomatometer approved critic.

Lewis has been writing for the blog since 2014. He’s a BIG Horror Film Buff and TV fan. Favourite films/TV shows include Halloween (Franchise), Batman Mask of the Phantasm, Batman Returns, Mean Girls, Titanic, Buffy the Vampire Slayer, Doctor Who & Black Books (A Random selection for sure!).

Kenton is a writer, director and actor – a triple threat !!!! In 2015 he produced his first feature length film A Dozen Summers using his own teenage daughters as the stars. As a lifelong fan of Doctor Who his film also features sixth Doctor Colin Baker as the narrator. 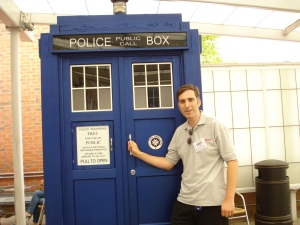 Ian is a Broadcast Engineer who works in the technical side of television transmission. When not doing that, he spends far too much of his time dreaming about spaceships, spies and monsters. Raised in the 1970s, on a rich diet of BBC drama and comedy; he enjoys a good audio play and steadfastly refuses to choose a favourite Doctor.

Want to join our team? Writers/Reviewers wanted now! Get in touch!!!

We also contribute some articles to another film site Battle Royale with Cheese. Check them out!

Thanks for stopping by. Enjoy!