There is often a complaint from Big Finish Productions that there are characters whom they put at one point before bringing them back making them confusing. The Eleven is one such character, being introduced in Doom Coalition as a Time Lord whose previous regenerations are still living in his consciousness before appearing through the Eighth Doctor box sets to the end of Ravenous, and being brought back with other Doctors. They appeared in The Legacy of Time, Dark Universe, and the Time War box sets, though often in past and future incarnations, and the latest release is The Eleven, a three-episode box set where the Sixth Doctor and Constance Clarke encounter the Eleven on the planet Molaruss. Like any of the new Big Finish box sets which have been successful, it’s essentially a three hour miniseries chronicling the Eleven’s rise and fall from power. Setting up a box set as a miniseries of connected stories flowing from one to the next is a brilliant setup as it allows an avoidance of a lot of the issues of one hour stories not living up to their full potential, and in The Eleven each installment manages to tackle different things involving generally small casts of characters going from each scenario to the next.

END_OF_DOCUMENT_TOKEN_TO_BE_REPLACED

So here we are. March 2021 and the end of The Monthly Range of Doctor Who. Over 20 years and 275 releases, and Big Finish Productions have decided to give their flagship range on final multi-Doctor send-off adventure. Relative newcomer Robert Valentine was given the task of writing The End of the Beginning, a story which harkens back to the very first release in the range, The Sirens of Time, telling three connected adventures for three Doctors before bringing them together for the final episode in one big overarching plan. Each episode adds to the drama and ends with the Doctor (and this time companion) in some sort of danger while everything builds towards some universe breaking danger. The production of The End of the Beginning is put in the hands of Ken Bentley, one of the range’s most prolific directors, and the sound design and music by Wilfredo Acosta. This is an entire story based on making an homage to the range; including appearances from range exclusive characters for one last hurrah before Big Finish moves into a new era of box-sets and new adventures with different Doctors and companions. There is at least one Monthly Range release which is still coming as it was delayed, but this truly is the end of an era for Big Finish Productions.

END_OF_DOCUMENT_TOKEN_TO_BE_REPLACED

As we move into the final three months of Big Finish’s oldest Doctor Who range, we begin to see releases which were essentially reactions to the current situation.  Whatever original plans were made to end the Monthly Range had to quickly be scrapped due to the pandemic as recording moved to remote sessions in home studios and a specific Fifth Doctor release delayed indefinitely.  There are only 3 releases planned for 2021, one Sixth Doctor for release 273, one Fifth Doctor for 274, and one final multi-Doctor extravaganza to say goodbye to the range at release 275. Release number 273 has now been released, the day this review is being written, and with it comes a Big Finish story that feels like it’s taken a page from Chris Chibnall’s book, but then improved it greatly.  Colony of Fear is a story which relies on its twist which decontextualised what the audience knows about the Doctor in a lot of ways, and as such reviewing this story will contain spoilers concerning the twist.  If you are simply wishing to know if Colony of Fear is worth your money, this review will end with the line: Colony of Fear may not be the absolute best story from Roland Moore or Big Finish Productions, it is a fascinating time that begs to have a sequel if only to get these characters back to listeners, giving this final trilogy a great start.  Right now that that’s out of the way on to the review with full spoilers in effect.

END_OF_DOCUMENT_TOKEN_TO_BE_REPLACED

In the midst of an explosive unseen adventure, the Sixth Doctor and his TARDIS team of Philippa “Flip” Ramon and Constance Clarke are tracking a malevolent mind parasite through the Time Vortex. Joined by an interstellar bounty hunter, the group soon end up in 1937 Rhode Island hoping to capture it before it does any real damage. But they aren’t quick enough to stop it from attaching itself to a maligned author of the day but one with significant impact for the future: H.P. Lovecraft. As the monstrous gods of the ‘Lovecraftian’ universe including Cthulhu and Nyarlathotep emerge in full force to turn Earth into a nightmare-infested hellhole, the Doctor and Flip venture into the mind of the famed author himself while Constance remains behind to keep an eye on him. As the TARDIS team is thrown into a world of madness, racism, and death, it’s going to take everything they have to keep their minds intact whilst the end of days threatens to destroy the planet itself…..

END_OF_DOCUMENT_TOKEN_TO_BE_REPLACED

It isn’t often when Doctor Who takes advantage of having companions from different time periods, and when it does they often don’t do stories about how characters from different times
would interact with being out of their time. Yes, it is often standard for a modern companion to find some aspect of history to their distaste due to modern sensibilities. This month’s main range release from Big Finish Production is in the unique position to not only have a modern-day companion react to the past, but a companion from the past react to their personal future.

END_OF_DOCUMENT_TOKEN_TO_BE_REPLACED

It’s Constance’s (Miranda Raison) birthday; so Flip (Lisa Greenwood) decides she needs to throw a “Wren party” for the occasion. When the Doctor (Colin Baker) takes them to the planet Formica it seems like an ideal world for the occasion, with the locals living a life of luxury. But what is the price of the freedom to do anything you want? Where are the older people & what is the mysterious Middle they keep hearing about? When people start giving the Doctor funny looks they soon find out.

END_OF_DOCUMENT_TOKEN_TO_BE_REPLACED

I rarely comment on the artwork for Big Finish releases. It is always good; but when the artwork for Order of the Daleks was released, it definitely caught the eye. Stained glass Daleks. Genius! This certainly peaked my interest. 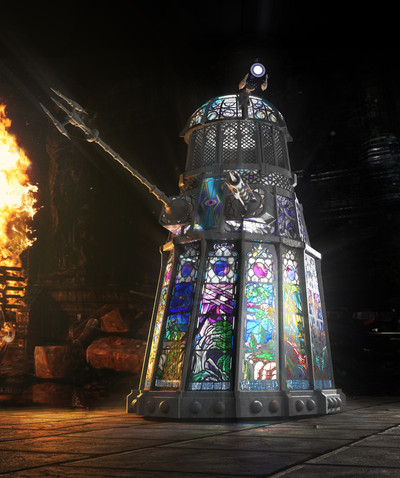 This story does not disappoint. It’s a marvellous script by Mike Tucker, who in the past has worked as a visual effects assistant in the original run of Doctor Who and in the 2005 version was a model unit supervisor who worked on the design of the modern Dalek. The passion for the show and the Daleks very much oozes out of this script. END_OF_DOCUMENT_TOKEN_TO_BE_REPLACED